Yesterday, the Environmental Protection Agency held its first and only hearing on a proposed rollback of Mercury and Air Toxic Standards. Environmental advocates, many of whom came forward as concerned parents, testified that the proposed regulatory change would hit close to home.

“My oldest daughter will turn 7 years old this year, the same age I was when Congress started the process to accelerate mercury and toxic air pollution protections via the 1990 Clean Air Act Amendments,” said Mandy Warner, senior policy manager at the Environmental Defense Fund during her testimony. “It has literally taken generations to get these standards implemented, and yet today we are facing an action by EPA that could upend the progress we have made.”

Last December, the EPA announced that it wants to change the way it weighs the costs and benefits of enforcing Mercury and Air Toxics Standards. By the agency’s new measure, which downplays the public health impact of airborne pollutants that often accompany mercury, it’s no longer “appropriate and necessary” to regulate hazardous emissions from power plants.

Critics of the proposed change say that the EPA is undoing a critical measure to protect Americans’ health — especially that of children — because mercury can negatively impact child development, even posing risks to fetuses in utero.

Senators on both sides of the aisle also spoke out against the proposed rule. Three Republicans and three Democrats, led by Senator Lamar Alexander of Tennessee and Senator Tom Carper of Delaware, submitted a letter to EPA administrator Andrew Wheeler opposing the proposed rule change.

“We believe it is critical to protect our children and our families from this dangerous pollutant,” the bipartisan group wrote. “Today, Americans are breathing cleaner air and their health is better due in part to the Mercury Rule.”

By the EPA’s own estimate under the Obama Administration, the mercury rule prevents 11,000 premature deaths, 130,000 asthma attacks, 4,700 heart attacks and 5,700 hospital visits each year. Since the rule came out in 2012, nationwide mercury air pollution from power plants to fall by more than 80 percent, according to an analysis by the left-leaning Center for American Progress. 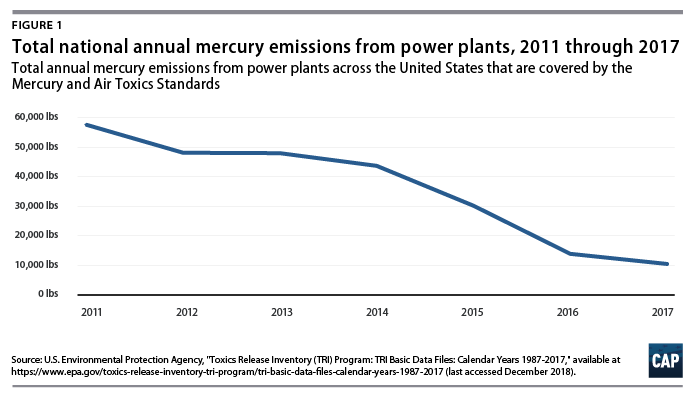 Courtesy of Center for American Progress 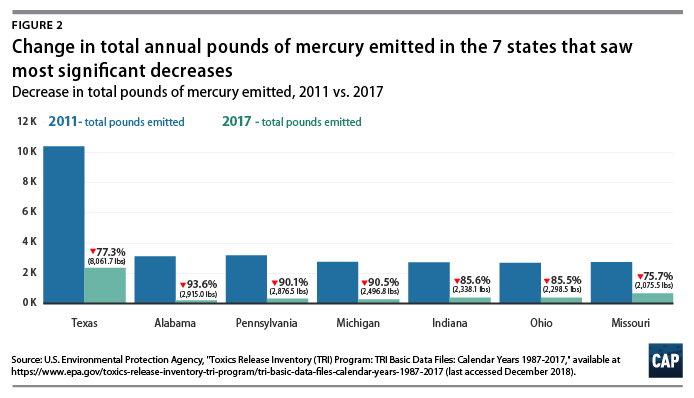 Courtesy of Center for American Progress

Dozens of organizations — including Sierra Club, Hispanic Federation, and the NAACP — submitted another letter, similarly calling attention to the benefits the existing mercury rule has had on public health and the environment.

The organizations closed their letter saying: “There is no defensible reason to continue to pursue this proposal to upend one of the most cost-effective and widely supported public health protections.”

“Doctors and scientists have repeatedly testified before this agency that mercury pollution in any form is highly toxic, and can cause persistent and lifelong IQ and motor deficits in children,” said Lyndsay Alexander, national assistant vice president and director of the American Lung Association’s Healthy Air Campaign.

The EPA will continue to accept public comments on the proposal until April 17, after which it will make a decision on the mercury rule.