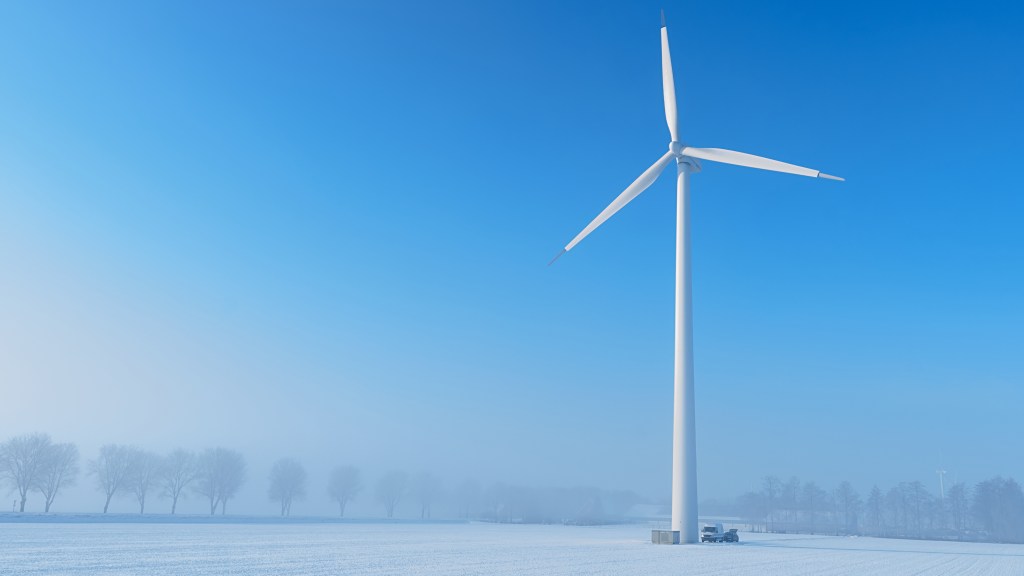 Alaska may be home to much of the nation’s fuel resources, but that doesn’t mean power comes cheaply up there. This, however, could be changing … with a little help from the wind.

Currently, about 200 Arctic Alaskan communities use diesel fuel as their primary source of electricity and heat. The costs to transport diesel to the Far North are significant, and these rural villages pay more for power than anywhere else in the U.S. And it’s not just the financial costs that are high. As our very own advice columnist wrote many moons ago:

It takes more oil to manufacture a gallon of diesel than a gallon of standard gasoline, and the production and refining processes for diesel produce more heat-trapping gases. … And the nasty rumors about diesel are true: It’s less refined than gasoline, aka dirtier. Diesel cars emit substantially more particulate matter and NOx, both of which are serious air pollutants and health hazards.

But moving away from diesel isn’t easy in the Arctic. It’s cold there, as you may have heard, with harsh conditions and terrain, and few options for transport. Plus, the people are poor: Most villages in the Northwest Arctic Borough — a vast, frigid area occupied by the Inupiat people — have little to no outside income. But one community has turned to wind power, and, as ClimateWire reports, it’s working:

Kotzebue was the first Arctic community in Alaska to build a wind farm. The city’s electric cooperative began installing turbines in 1997 and has steadily increased its capacity ever since. Last year, wind provided 20 percent of the town’s average electricity demand of 2.5 megawatts.

As its wind capacity has increased, the Kotzebue electric cooperative has been able to cut the amount of fuel it barges into town to run its diesel engines. Last year wind displaced 250,000 gallons of diesel fuel and saved the community $900,000, according to Brad Reeves, general manager of Kotzebue Electric.

Now the Kotzebue microgrid system is looking to further reduce diesel imports by adding a lithium-ion battery unit to its electricity network. The battery, which is the roughly size of a large SUV, will store wind energy when demand is low and tap the power when the renewable resource fluctuates.

“It will be good for that period when we have bands of wind and we have our diesels running,” Reeves explained. “Normally when the winds go out, we’d shift to a bigger diesel unit. The battery will let you stay in that band and keep the smaller diesel on. That will save money.”

Kotzebue isn’t alone. The villages of Buckland and Deering have also invested in renewable energy, and Nome, a booming metropolis 200 miles to the south (population 4,000), erected their first turbines in 2008 (although regular operations didn’t begin until 2010). From ClimateWire:

Last year, thanks to steady improvements and expansion, the wind farm provided 7 percent of Nome’s electricity. In the process, the 17-turbine operation, now owned by Nome Joint Utility System, managed to displace 150,000 gallons of diesel fuel and save its electricity customers about a half a million dollars.

That’s important in Nome, which made international headlines in 2012 when the community’s harbor iced up before its winter fuel delivery arrived. To bring needed diesel and gasoline to town, a U.S. Coast Guard ice breaker was called in to escort a Russian tanker into the Nome harbor.

This year, the Nome utility company is looking for ways to increase the amount of wind power flowing to its customers.

“We’ve recently made some adjustments to our system to allow wind to actually flow into the system at a higher rate,” explained John Handeland, manager of the Nome utility. “There are times when we’re getting 30 to 35 percent of our power from wind.”

The problem is that wind stops, and energy needs to be stored if villagers don’t want to burn diesel for heat. Temperatures in this part of the world reach minus 100 degrees Fahrenheit. It’s not exactly a climate you want to lose power in.

The solution may lie in microgrids, which are often used during military operations and, increasingly, in natural disasters, as they allow users to distribute their own electricity through generators, batteries, or renewable sources like solar and wind power. Alaska already uses a lot of microgrids — half the Arctic’s population is powered by microgrids — but by connecting microgrids to renewable resources, Arctic populations will (hopefully) be able to lower their dependence on diesel fuel. The Northwest Arctic Borough certainly hopes so — they set a goal of replacing 25 percent of diesel usage with renewable energy by 2025.