Here’s some bad news: A new report shows that U.S. investment in renewable energy fell by 6 percent last year. Ready for the good news? Six percent ain’t too shabby considering President Trump spent his first year in office announcing plans to withdraw the U.S. from the Paris agreement, slapping tariffs on solar panels, and reneging on decades of environmental policy.

In fact, despite federal setbacks, the report called the U.S. “relatively resilient.” Compare that 6 percent drop to Europe and the U.K, which saw investments in clean energy fall by 36 percent and 65 percent, respectively. The U.S. and its neighbors across the pond face a similar set of obstacles: the end of subsidies for renewables, growing interest rates, and policy uncertainties. In the U.K., the massive drop in investments coincides with the end of a big subsidy for renewables. By comparison, China invested 10 percent more in renewables than it did in 2016, and added 53 gigawatts of capacity — that’s equal to more than half of the world’s total renewable energy capacity.

One reason for U.S. resiliency? Our cities are stepping up to the plate. “The rise of solar power over the past decade has been largely driven by cities,” the Environment Texas Research & Policy Center found in a recent report. Researchers looked at the total solar photovoltaic capacity installed by 20 major cities across the U.S. and found that, as of the end of last year, those cities alone have more solar energy capacity than the entire country had installed by the end of 2010. 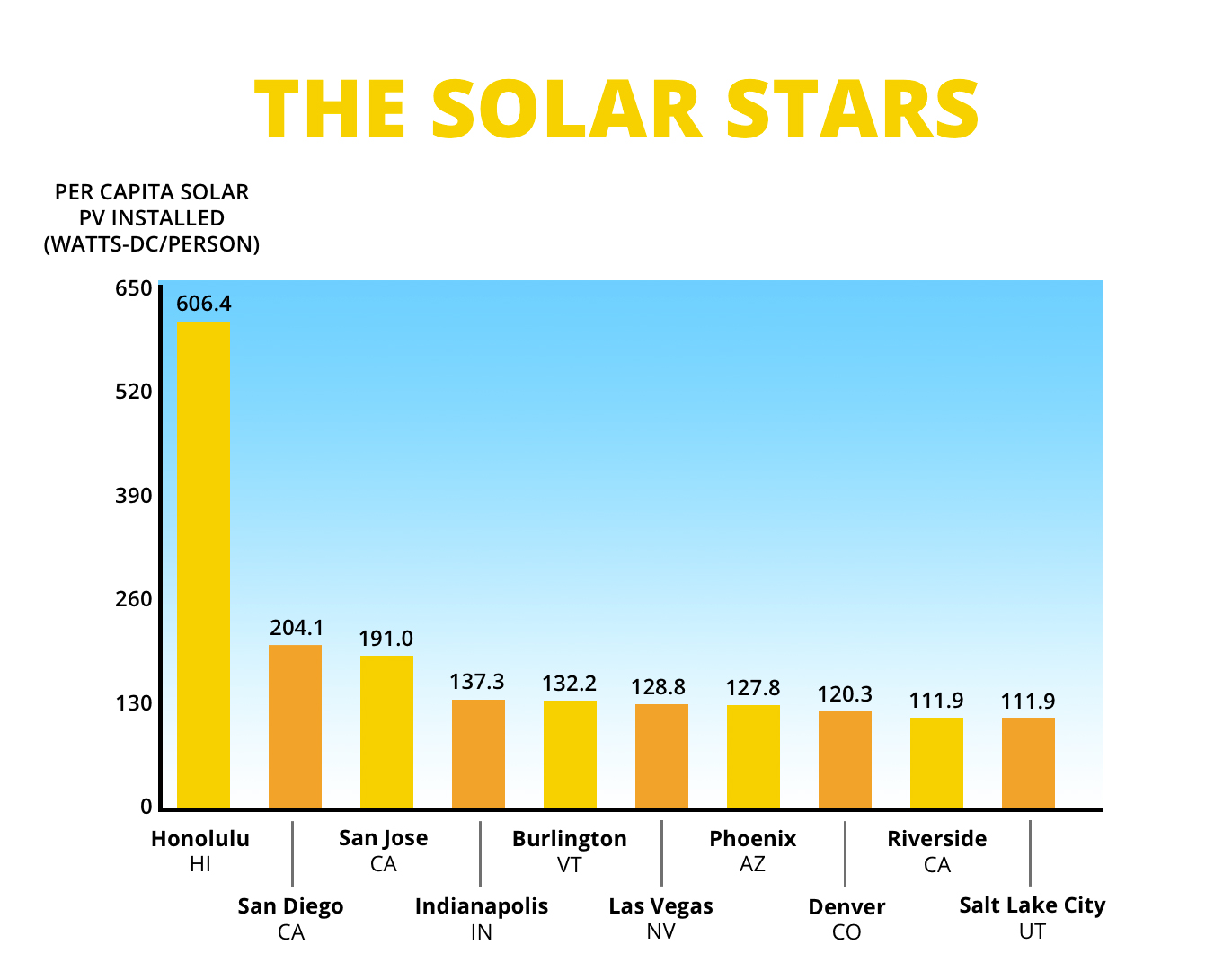 Los Angeles, San Diego, Honolulu, Phoenix, and San Jose were the top five producers of solar photovoltaic capacity in 2017. But the report also highlighted 18 “Solar Stars” — cities that had 50 or more watts of solar installed per person. Honolulu is the shiniest of those solar stars, with three times as much capacity as the next runner up: San Diego. Fresno, California; Santa Fe, New Mexico; and Tucson, Arizona were close behind.

The groundswell of support for renewable energy in American cities is linked to the goals laid out in the Paris agreement. In 2017, Dan Firger (a member of Grist 50 2018) teamed up with former New York mayor Michael Bloomberg and California Governor Jerry Brown to launch a Bloomberg Philanthropies project called America’s Pledge. Since the project went live, 110 cities and have pledged to cut emissions, 13 leading academic institutions have signed on to reduce their environmental footprints, and even local businesses are taking steps to mitigate their impact on the climate. In all, this coalition accounts for half of the spending power in the U.S.