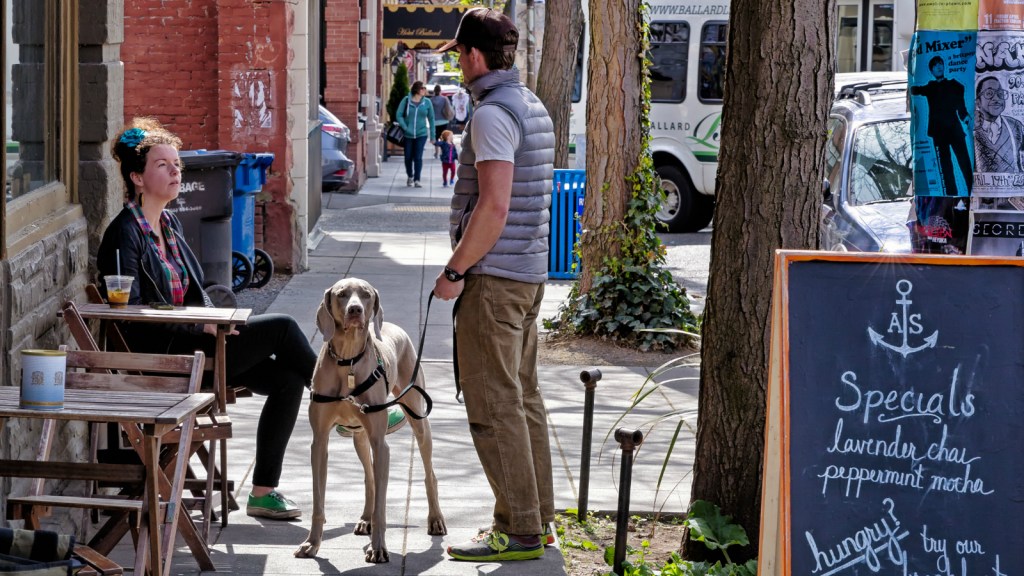 You might think you know what determines whether people will walk or bike around a neighborhood. Does it have complete streets with sidewalks and bike lanes? Does it have safe speed limits for cars and traffic-calming features like median islands? Is it well-lit at night and safe from crime? And, in the metric that Walk Score made famous, are there businesses and transit stops near people’s homes?

But a recent study finds that what we traditionally consider the essential components of walkable urbanism are not necessarily the most important factors to everyone. The paper’s authors, Cynthia Chen and Xi Zhu, a professor of civil engineering and a former graduate student, respectively, at the University of Washington, surveyed residents with both high and low incomes in neighborhoods around Lake Washington in Seattle. For lower-income people, Zhu and Chen found the neighborhood qualities that were associated with more walking were ones you would expect, such as density and convenience. For rich people, those things didn’t matter. What mattered was whether they perceived their neighborhood as attractive.

Zhu and Chen asked survey respondents how much, on a scale of 1 to 5, they agreed with statements about their neighborhood such as, “Stores are within easy walking distance of my home,” and “The crosswalks in my neighborhood help walkers feel safe crossing busy streets.” Zhu and Chen also asked the Seattleites how often they walk or bike.

Some of their key findings, especially relating to lower-income people, are consistent with previous studies from around the country. Here are some of the main points:

The unexpected finding has to do with rich people. Among respondents with higher incomes, only two factors were clearly correlated with walking or biking more: the number of bikes per person in their household and, more interestingly, whether they considered their neighborhood attractive.

This actually makes sense, if you think about it. Unlike some poor people, rich people in Seattle typically have access to a car, so for them walking or biking is a choice, not a necessity. It’s essentially a recreational decision: If walking or biking to a store or a friend’s house is enjoyable, then they’re more likely to do it.

Note that these metrics are not just measuring attractiveness as such; they are also measuring how urban the neighborhood is. You see and speak to other people when walking in your neighborhood if it has other pedestrians. There are interesting things to look at while walking in your neighborhood if it has a mix of uses, of building types or building ages, if you can peek into shop windows, check out street vendors, see people on stoops or porches, take a rest on “street furniture” such as benches, look at public artwork like murals or graffiti on walls, and so on. Even the “attractive buildings” category may get a bump from being in a more urban environment in which buildings are typically easier to see and designed more for the benefit of passersby than solely for the occupants like in Modernist suburbia. Consider the difference, for example, between the exterior beauty and ornamentation of even low-income tenement buildings on Manhattan’s Lower East Side and the boxy, unadorned houses that jut out at odd angles in suburbs like Arapahoe Acres outside of Denver.

The typical suburban neighborhood is not only unconducive to walking because it may lack sidewalks or stores, but because there is little of interest to see. This is even true of many the nation’s richest suburbs. They have attractive homes but they are usually too spread out, set too far back from the street, hidden behind hedges, lawns, driveways, and garages. There are no businesses interspersed, no surfaces for street art, and no street vendors or street furniture.

Both rich and poor will need to walk and bike more and use cars less if we’re going to reduce carbon pollution. That means neighborhoods should be zoned for higher densities and more mixed uses. It also means, if Zhu and Shen’s findings are replicated elsewhere, that neighborhoods should be zoned with requirements that buildings engage the street. That is, they should be built near the sidewalk rather than hiding behind a parking lot. Streets should have things to look at and places to strike up a conversation with neighbors.

New York City’s Department of Transportation has been working on that in recent years. Through its pedestrian plazas program, NYC DOT blocks off sections of roadway and fills them in with planters, chairs, and tables. Seattle, reportedly impressed with the New York program’s success, is looking to do the same thing. Hopefully, it will get some of the city’s well-heeled residents out of their cars.