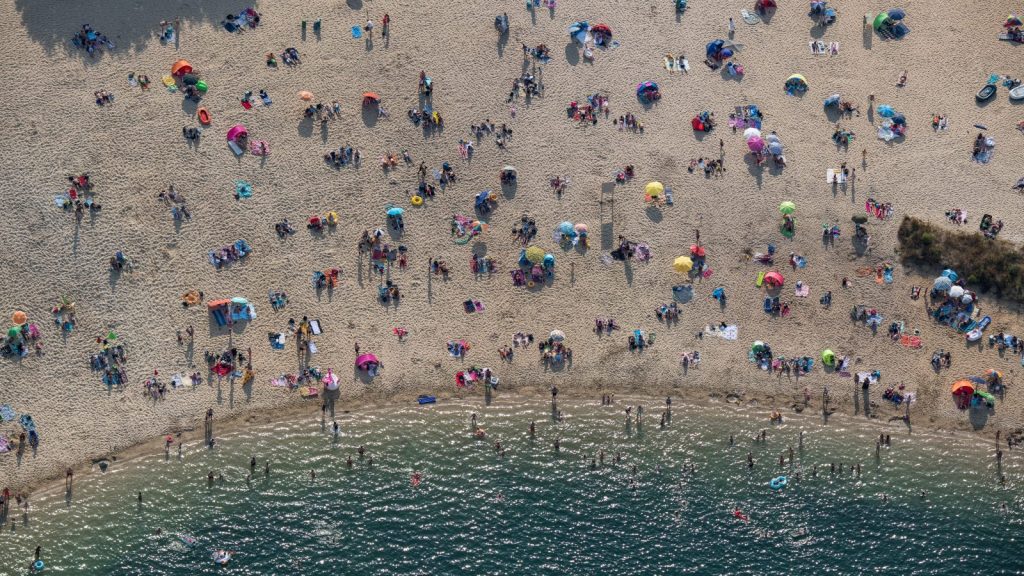 The City of Lights could be the City of Lights Out tomorrow as temperatures approach a record of 107 degrees. And Paris isn’t the only place sweltering in this week’s heat. Cyclists in the Tour de France are wearing stretchy sacks of ice around their necks as they race toward the Alps, while commuters on the London Underground carry spare water bottles, and Spanish firefighters battle wildfires— all thanks to torrid air from the Sahara that got trapped between storm systems over the Atlantic Ocean and Eastern Europe, forming a “heat dome” over the entire continent. It’s similar to the extreme heat that lingered over the eastern United States for a 12-day stretch in July, breaking records and warming the Potomac River to 94 degrees.

The ability to predict the next heat wave is a big deal to meteorologists. That’s because more warning means extra time to prepare cooling centers and swimming pools, shore up the electric grid, and put supplies in place for heat-vulnerable populations and machines. As you might expect, climate change is making heat waves longer and more common. Scientists say that the number of heat waves in 50 major American cities has tripled since the 1960s. Last month was the hottest since record-keeping began 140 years ago.

Today, meteorologists are pretty good at giving us an accurate 10-day weather forecast, but now they’re peering farther into the future by examining an atmospheric phenomenon called the Madden-Julian Oscillation. The MJO erupts over the Indian Ocean every so often and moves eastward across the globe, spreading trouble through the tropics over the course of 30 to 60 days. The oscillation behaves like a high-altitude wave that either amplifies or squelches existing conditions closer to the ground. Think of it as El Niño at 18,000 feet.

According to a recent study in Advances in Atmospheric Sciences, the oscillation contributed to heat waves in California’s Central Valley from 1979 to 2010. “The MJO is an influencer rather than a creator,” says Richard Grotjahn, an author on the paper and a professor in UC Davis’ Department of Land, Air, and Water Resources.

Using computer simulations and weather observations from ships, satellites, and roofs, scientists at the National Center for Atmospheric Research in Boulder are developing a short-term forecast model for extreme summertime heat. For now, they’re looking back in time, working to see how accurately their model captures heat waves globally and in the various seasons, and whether it accurately represents the high- and low-pressure systems created by the MJO.

In North America, says Julie Caron, an associate scientist at the center’s Climate and Global Dynamics Lab, the oscillation causes high-pressure systems that block the movement of cooler air from the Arctic or the Pacific Ocean. “It’s like a traffic jam where the weather systems are stalled out behind,” she says.

One question Caron and her colleagues are wrestling with is how exactly to define a heat wave. Not only do conditions vary from the tropics to the temperate zones, but average temperatures keep creeping upward as the planet warms under heat-trapping greenhouse gases. She is hoping that, by the end of the year, the model will be able to predict the likelihood of extreme heat three or four weeks in advance. But that’s just for research purposes, she cautions, not for local TV weather forecasts.

Officials at the National Weather Service have also been pushing forward their predictions of heat waves in recent years. They’re aiming for the same three- to four-week outlook, according to Jon Gottschalck, operational prediction chief at the NWS Climate Prediction Center in College Park, Maryland. “Right now, on average, we can do pretty well two weeks out,” Gottschalck says.

But looking much beyond that will not be easy, he adds. Tiny measurement errors in temperature, rain, or pressure readings can cause big foul-ups as they are processed in the NWS’s complex global weather computer model. There’s also the inherent weirdness of Earth’s atmosphere.

“There are still things we don’t know,” Gottschalck says. “As you get further out in time, the atmosphere — chaos — takes over. The predictability just drops.”