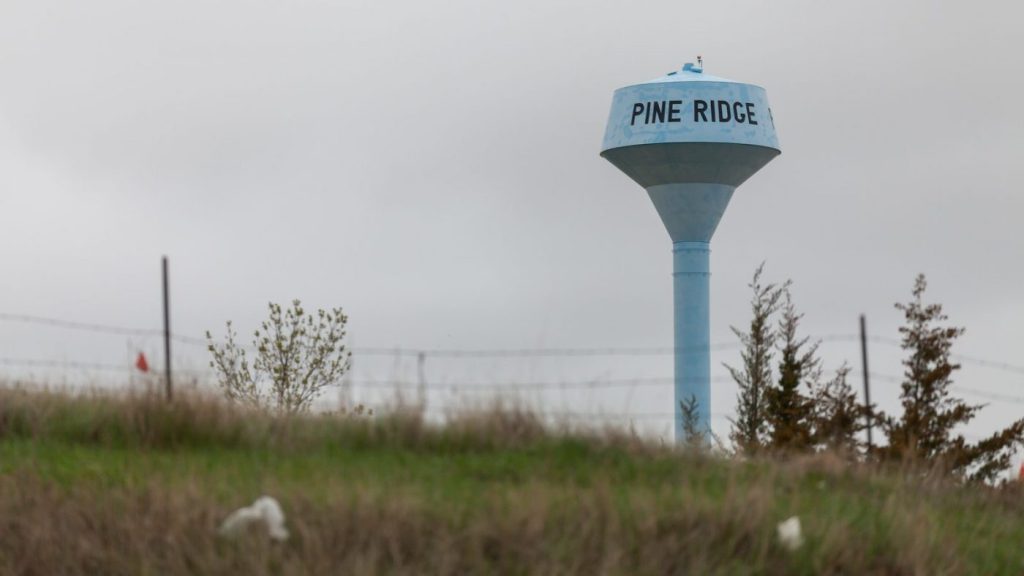 The Oglala Sioux Tribe in South Dakota is facing what the New York Times has called “a humanitarian disaster that seems unlikely to abate soon.” In the aftermath of a blizzard that struck the state this month, severe flooding has inundated the Pine Ridge Indian Reservation and trapped some people in their homes. As of Monday, there have been at least four deaths reported on the reservation as a result of the extreme weather conditions.

Times journalist Mitch Smith wrote over the weekend that the crisis is a “collision of nature, poverty and inadequate infrastructure.”

Tribal employees on Pine Ridge took a boat across a flooded dirt highway. There were people on the other side waiting, but they did not get in. For some, there was an unenviable choice between being stranded at home or being rescued and becoming homeless. pic.twitter.com/SG687H3hgO

Woo that last blizzard really got us here on the Pine Ridge Indian reservation but you know what? There's still people traveling 😂 we are a resilient people #wildoglala #pineridgereservation #proudnative #2019blizzard #blizzard #springtime

Went for a walk to see the effects of the recent floods on my towns local spill way. Prayers to my people who live near a creek! 😶✊✊ #indianreservation #pineridgereservation #prayers #floods #thelandneedsit #struggle

Tribal leaders at the Pine Ridge Indian Reservation, which has a population of about 20,000, declared a State of Emergency the day after the blizzard hit the area, displacing 500 on the reservation. Tribal leaders are working overtime to reach elders and those with urgent medical needs.

After a water main break, thousands of residents were left without running water. South Dakota Governor Kristi Noem said the state had responded to tribal requests by sending equipment and personnel, including about a dozen members of the National Guard to hand out drinking water.

Some critics questioned why Governor Noem took so long to send in troops to the reservation and why she didn’t deploy more national guard members compared to other communities. “We’re here, we’re showing up,” said Noem, who visited the Pine Ridge reservation on Saturday. “We can’t come onto tribal land until the request is made. As soon as they did, we were here.”

The governor and other state officials have clashed with tribes in the past over encroaching pipelines, including the Dakota Access Pipeline and Keystone XL. Noem is expected to sign into law soon two bills creating new punishments for pipeline demonstrators and their supporters, which The Great Plains Tribal Chairman’s Association — including the Oglala Sioux Chairman — has opposed.

I was originally assigned to report on the work @tvalleycdc is doing to address these deep inequities—the long arm of Wounded Knee: genocide.

The situation on the ground here only underscores how heroic their work—and the resilience of all Oglala people—really is.

The disastrous flooding that has been widespread throughout the midwest is not just a worry for this year. Grist’s Eric Holthaus wrote that warmer spring weather is arriving earlier each year as a result of climate change, bringing with it more intense rains and heightened flood risk.

There are efforts underway at Pine Ridge to curb the effects of climate change. The Thunder Valley Community Development Corporation is developing a “regenerative community” on the reservation, which will be able to make its own energy and food. The project also incorporates green job training and hires locally to build sustainable homes and apartments. (Much of these efforts were led by former Thunder Valley director and newly minted Grist 50 Fixer, Nick Tilsen.) But images on Facebook show solar panels barely above flood waters.

The Oglala Sioux Tribe website is the focal point for emergency information and donation collection. And the Pine Ridge Emergency Relief organization is coordinating volunteers.