At a happy hour in Midtown Manhattan, Luis Pineiro and Jose Hernandez have a lively discussion on how to get solar energy to more residents in the South Bronx. Pineiro is an operations manager for OnForce Solar, a company that’s developing so-called “community solar” projects throughout New York City.

Hernandez is a South Bronx home owner and an early OnForce subscriber. He signed up due to the savings he’d get on his utility bill. But he also supports community solar since it provides carbon-free energy that doesn’t cause air pollution and asthma for his neighbors. He calls the concept of community solar a “no brainer.”

In New York, there’s been a groundswell of political and financial support for community solar, which make it possible for people to buy in to solar energy without putting up their own panels. There are eight community solar sites completed in New York City and nearby Westchester County, and nearly 60 more sites in the queue. But with the buzz around the projects comes a bigger issue: How do you get the actual community to buy in?

“Where are you in the neighborhood? You have to come into the community,” Hernandez says to Pineiro. They brainstorm strategies like getting local politicians on board and outreach at farmers markets and subway stations.

Pineiro grew up in the neighborhood, not too far from OnForce’s solar site. It’s been important for him to make sure that local low- and middle-income families can reap the benefits of solar. That’s key, since the up-front price tag of renewable energy can make it out of reach for many Americans.

It can cost between $10,000 to $25,000 to install a solar panel system on a home. And then there are the barriers beyond cost, like being a renter or having a roof that’s too small or shady for panels. These factors mean solar isn’t available to about half of all Americans, according to the Department of Energy. New York is among the top dozen solar-producing states in the U.S., but in 2014, less than 4 percent of solar installations benefited New York households with incomes below $40,000.

That could change if the community solar model catches on. Not only does community solar make renewable energy accessible to more people; proponents say that it has the potential to alleviate energy insecurity. Each month, one in three Americans struggles with choosing between paying their utility bill or for other basic necessities. With the right incentives, community solar can lower utility bills and give communities control over how they produce and consume energy.

Here’s how it works in New York. A group of individuals or a company like OnForce builds a solar farm. The farm feeds energy into the local power grid. People sign up as a member or subscriber. When you join, your utility account gets connected to your subscription. The utility then issues credits to everyone subscribed to the community solar project for the power it produces. 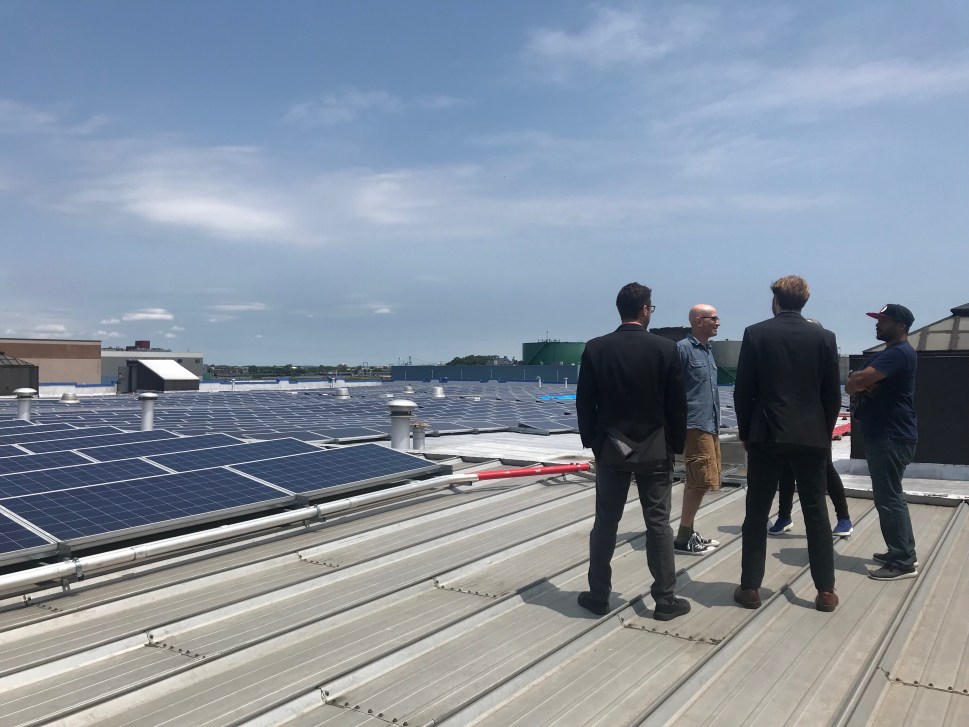 Community solar is nascent, but growing quickly. OnForce’s first community solar site, which came online this summer, includes more than 1,200 solar panels, which can generate enough power for up to 75 homes. Once all of New York’s planned sites go online, they would generate a total of 20.5 megawatts — that’s about 1/30th the output of the typical coal-fired power plant.

Nineteen states and D.C. have policies and programs that encourage the growth of shared renewables and 42 states have at least one community solar project online, according to Solar Energy Industries Association calculations.

In 2015, Governor Andrew Cuomo put community solar on the map in New York when he approved the Shared Renewables Initiative. It set up the system where New York community solar subscribers get credit back on their utility bills — typically lowering their bill by about 10 percent. The following year, he set a goal of getting 50 percent of the state’s electricity from renewable energy by 2030.

But some advocates in New York are concerned about a new state policy that ends net metering, which allows solar subscribers to give unused electricity back to the grid in exchange for credits. Instead, it will look at a host of variables to determine how much money solar subscribers get back on their bill.

“It provides for a unpredictable value structure that doesn’t really provide a guarantee on how much solar will be valued at in different areas or at different sites,” says Kartik Amarnath at the NYC Environmental Justice Alliance, which opposed the change.

It’s a complicated landscape that’s not always friendly to low-income families. Some project developers charge a membership fee for people to buy in, which can be a barrier to families facing energy insecurity.

Plus, the residents who these projects set out to help tend to be difficult to convince, and for good reason. New York has had to crack down on Energy Service Companies (known as ESCOs), independent outfits that promised affordable renewable energy but in fact overcharged subscribers. Piniero and other legitimate community solar developers say they have had to clear solar’s good name as a result.

“Sometimes people don’t really have the information to make informed decisions,” says Diana Hernandez, an assistant professor at Columbia University. “The educational piece is important because this population also tends to be targeted with predatory practices.”

One solution to build trust is to ditch the subscription model in favor of one that turns community members into part-owners. UPROSE, Brooklyn’s oldest Latino community-based organization, is undertaking such an endeavor. They’re in the midst of developing a co-owned solar facility in Sunset Park, Brooklyn — a predominantly working class community of color that hosts three fossil fuel plants within a 15-mile radius.

“Much of the justification for our current fossil fuel-based energy system is that it’s supposed to generate plentiful and cheap energy,” says Basav Sen, the climate justice project director at the Institute for Policy Studies in Washington, D.C. “So even as it overburdens some communities — black communities, poor communities — with pollution, it also doesn’t produce energy that they can afford.”

This sentiment was echoed by UPROSE’s infrastructure coordinator, Ryan Chavez: “[Sunset Park] has struggled both with economic hardships and disinvestment on one hand and a disproportionate share of environmental burdens on the other. As we push New York City and the state to go 100 percent renewable, we need to do so in a way that addresses this legacy.”

According to Chavez, that doesn’t just mean giving local communities a financial stake in a solar farm; it also means giving them a decision-making role in how the facility operates and who receives the benefits.

For now, most community solar projects in New York City follow the subscription model, including the solar farms developed by Piniero’s company. Although residents from any part of the city can sign up to be part of the project, Pineiro hopes that South Bronx residents will sign up. In designing the program, he’s made deliberate decisions — like choosing not to require a credit check and not requiring a contract — to try to make sure that no one would feel it was out of their reach.

“It’s basically helping people save money,” Pineiro says. “You come across someone like a parent that can’t get their kid a Happy Meal. It’s being able to get them 3 extra dollars in their pockets to be able to get that Happy Meal, to get a little toy, or get whatever they need for their day-to-day.”