Single-use plastics (straws, bags, tiaras declaring you are a “Bitchin Bachelorette”) are the eco cause du jour. Except, by my count, this jour never seems to end. On one hand, I recognize that the disposable plastic accoutrements of our daily lives are an environmental scourge with little redeeming value (except in the case of people who physically require straws to drink) and a symbol of our cultural obsession with convenience at all costs. On the other, full-throated self-congratulatory militancy around the smallest of consumer choices makes me want to go to bed forever. While I abhor a polyethylene wrapper, I also despise anti-plastic sanctimony.

Or, at least, I did. Then I learned that the plastic enemy is an unexpected unifier, sort of like White Walkers or carbohydrates. A plastic bag — or straw, or cup lid, take your pick — has fluttered American Beauty-style onto an unlikely patch of common ground shared by Somalian militants, climate-change-denying Senator James Inhofe, and Vogue magazine. The fact that each of these entities — each of whom I loathe — is fed up with single-use plastics makes me pause for some soul-searching.

Let’s start with Al Shabaab, an Islamist terrorist group that has ruled over parts of southern Somalia since 2011. Al Shabaab believes that Jews are their enemy and women should be servile, so as a Jewish woman I am not confident we’d hit it off. There’s also the fact that they have killed, raped, and enslaved thousands of civilians.

At the beginning of this month, the news hit American shores that Al Shabaab had instituted a plastic bag ban across its territories. Apparently, stray plastic bags are rampant in Somalian brushlands, where they clog the stomachs of indiscriminate Somalian cattle.

Haha! So funny! A terrorist group coming to the same legislative conclusion as a Berkeley City Council meeting! This joke, made by approximately 85 internet news sources in the past week, fails to recognize that Al Shabaab’s environmental policies can affect its hold on power, says Bronwyn Bruton, an expert on African insurgencies with the Atlantic Council, an international policy think tank.

For example, Al Shabaab’s charcoal trade has contributed to a loss of some 438,000 trees across Somalia. That, in turn, has been linked to a famine in the country last year. Al Shabaab lost credibility among Somalians after that, Bruton says. The new policy “could demonstrate learning, that they’re trying to be more environmentally sensitive,” she says. “They’re probably thinking about the famine and the impact they’ve had on the environment.”

Al-Shabaab may be bloodthirsty, misogynistic, anti-Semitic vigilantes who enjoy Twitter, but they also have figured out that plastic pollution is a real, actionable problem.

In an equally surprising twist, so has Senator James Inhofe, author of The Greatest Hoax: How the Global Warming Conspiracy Threatens Your Future, who is fond of toting snowballs onto the Senate floor as evidence that justifies his book’s title. Although he does not behead his enemies (to the best of my knowledge), he too hates plastic garbage. Because he loves turtles!

Specifically, Kemp’s ridley sea turtles, who reside on the South Padre Island coast — where the senator has spent a lot of time. Inhofe keeps a painted portrait of a sea turtle in his office, and once helped rescue a turtle who had ingested a plastic bag. He was a primary sponsor of the 2004 Marine Turtle Conservation Act and presided over a congressional hearing on marine debris.

Inhofe is not the only plastic-hating turtle-lover; turtles, as it turns out, play a crucial role in straw awareness. The crescendo of the anti-straw movement first swelled with a viral video of a turtle with a straw in its nose. (Apparently, Kemp’s ridley sea turtles are actually less likely to ingest floating plastic compared to other turtle species, but don’t tell Inhofe that.)

I asked Jeffrey Schmid, Environmental Research Manager at the Conservancy of Southwest Florida: Why the turtle love?

“People just like turtles, and seeing one in harm’s way elicits a very strong response,” he says. Schmid says he finds them fascinating, but it took him a little while; the first time one popped up next to him on a surfing excursion, he thought it was a corpse.

To be honest, he also sounds a little bit baffled by the turtle obsession. “They’re certainly not cuddly if you’ve ever encountered one in the wild,” he says. “Especially the ridleys. They try to bite you, and flap their flippers.”

Hmmm. Perhaps it’s that Senator Inhofe feels more of a personality kinship to the reptiles than sympathy for them, and that’s what drove him to sponsor the turtle conservation legislation.

Me, I fail to relate to congresspeople who spout anti-climate propaganda any more than I do to murderous Islamist militias. So, let’s turn to my personal favorite tool of the patriarchy, Vogue magazine, to which I subscribe despite the fact that its content frequently makes me scream into a throw pillow.

The July 2018 issue showcases the magazine’s most recent deranged approach to sustainability. In addition to profiling billionaire supermodel Gisele Bündchen as “Earth Mother,” the issue includes three personal essays on eco-conscious consumer choices. One author built a “brand new passive house on the coast of Maine.” Hmm. The next: “I will teach my baby daughter to one day slaughter her own meat for dinner.” Alright. Finally: “I haven’t bought a trash bag in two decades.” 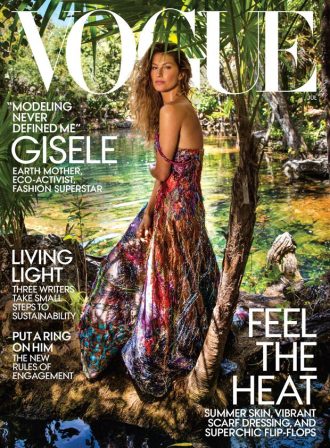 Essayist Sloane Crosley writes that her plastic bag stockpile “had become a personal challenge. I was determined to never throw out an empty plastic bag. I became hyperefficient at reusing every last one of them, expertly compacting both bathroom and kitchen detritus until they formed plastic pillows too stuffed to tie … I was on a personal mission.”

For all the sighs and groans I’ve uttered at acts of environmental asceticism, I realized — maybe for the first time ever in reading an issue of Vogue — this is me. I do this. I hoard plastic bags and takeout containers and every spare Tupperware. I meticulously track the fullness of my apartment’s trash cans, to ensure that the bags are absolutely maximized. It’s a neurosis, maybe. But it’s also a form of protest against disposable consumerism. And that actually does matter to me.

I admit it. Even though anti-straw campaigns drive me to head-banging distress, I too am part of the anti-plastic army. In this case, the enemy of my enemies is not, in fact, my friend. I’ve found the harmonious appeal in the banning of straws, the embargoing of plastic bags. And god willing, I will never write about it again.