The Environmental Protection Agency’s new acting chief, Andrew Wheeler, has gotten a soft reception from the media during his first couple of weeks on the job. The honeymoon phase needs to end now.

Wheeler is benefiting from comparisons to his disgraced predecessor, Scott Pruitt, who was flamboyantly corrupt and unprecedentedly adversarial toward the press. Wheeler keeps a lower profile than Pruitt and has given interviews to mainstream journalists instead of insulting them, so his different style has generated positive pieces and headlines.

But being more sober and civil than Pruitt is a very low bar to jump over. Wheeler doesn’t deserve praise for clearing it.

Wheeler received glowing press just for saying he would listen to EPA employees. “When it comes to leadership, you can’t lead unless you listen,” he said during his first address to agency staff on July 11. That quote was featured in the headlines and introductions of stories in the New York Times and the Washington Post by reporters who had done some of the most aggressive coverage of Pruitt’s scandals and regulatory rollbacks.

But, as Mother Jones reporter Rebecca Leber pointed out, Pruitt had used the exact same line during his first address to agency staff in February 2017: “You can’t lead unless you listen.”

This is a stark example of how journalists have been quick to paint Wheeler as a departure from Pruitt even when he’s doing exactly what Pruitt did.

The media need to stop focusing on the minor stylistic differences between Wheeler and Pruitt and start homing in on substance. The new EPA chief has already implemented his first major rollback of an environmental protection: Wheeler, a former lobbyist for a coal company, signed a final rule that will make it easier for power plants to dump toxic coal ash in ways that are likely to pollute groundwater. And Wheeler has pledged to carry forward the rest of Pruitt’s agenda.

What media got wrong in covering Pruitt

So how should the media be covering Wheeler? To help answer that question, take a look back at how they covered Pruitt.

Journalists at many outlets did excellent reporting on a wide range of Pruitt’s scandals and regulatory moves, particularly the teams covering the EPA at the Washington Post and the New York Times. The problem was that only some of that good original reporting got amplified by other media outlets and ultimately seen by wide audiences, and too often it was the least important stories that got the most attention.

Media Matters analyzed TV news coverage of Pruitt during a period in June in which a number of EPA regulatory rollbacks and Pruitt scandals were revealed. 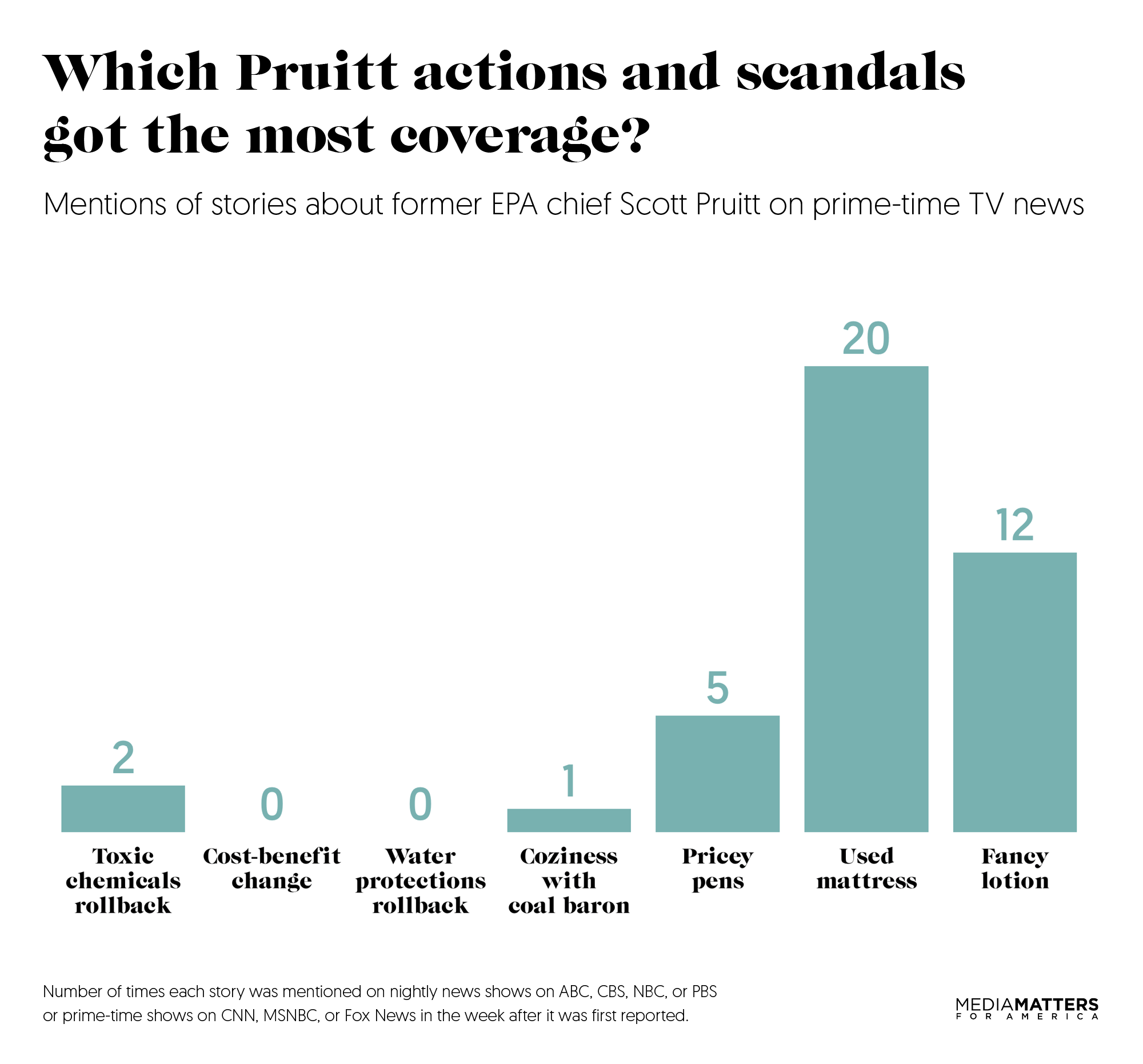 For each of the following stories, we looked at how much coverage major prime-time TV news programs devoted to it in the week after it was first reported:

The first four stories — the ones involving policy changes likely to lead to more pollution — got markedly less attention on TV news than the scandals surrounding Pruitt’s bizarre personal misbehavior.

How the media can do better in covering Wheeler

Pruitt getting the boot opens up an opportunity for journalists to do a better job covering the EPA. Wheeler seems unlikely to suck up all the oxygen by making goofy moves like buying tactical pants or using sirens to speed to his favorite restaurant.

Last month, some reporters on the EPA beat expressed frustration that Pruitt’s scandals were serving as distractions:

While we're all talking about EPA Chief Scott Pruitt's sleeping & eating habits, the agency continues to advance significant rulemaking.
Today's entry represents the 1st step in changing the way the EPA calculates the costs & benefits of its regulations. https://t.co/pBNeyrdVjc

I would rather be writing about EPA policy–like how the EPA today moved to roll back the Clean Water protections it considered excessive from the Obama Administration. I really mean it. Thankfully our colleague @CoralMDavenport had a story on that too https://t.co/EEkD33nH6a

Now they’ll have more time to chase stories about serious ethics questions at EPA and, most importantly, the regulatory rollbacks that could make Americans sick and kill us.

During Wheeler’s reign at the EPA — which could last years — reporters will need to stop comparing him to his predecessor and instead bird-dog the agency’s deregulatory moves and dig for the ethics and corruption stories that aren’t as ridiculous and simple as those Pruitt routinely offered up. We’re counting on journalists assigned to the national environment beat to do just that.

But here’s the potentially trickier part: After original reporting comes out on Wheeler’s actions, other journalists and commentators and TV news producers will need to amplify those stories, writing articles and producing segments to get the news in the public eye. Will they do it now that the EPA is no longer run by an absurd character with a proclivity for dramatic self-sabotage?

While Pruitt’s silly scandals were a distraction for some media outlets, they were a lure for others, drawing their eyes to an agency they might not usually cover often or in-depth. For instance, Vanity Fair — not traditionally a source of EPA news — published numerous pieces that highlighted Pruitt’s scandals and also noted the more important fact that he’d been gutting regulations and suppressing science.

We need Vanity Fair to keep it up during the Wheeler era, and we need NBC Nightly News and CNN’s Situation Room and so many others to join in.

Quiet deregulation and allegiance to industry are easy to ignore in the loud, lewd age of Trump, but everyday Americans who eat, drink, and breathe can’t afford for the media to miss the most important stories about the EPA.