The FDA is confused about the definition of 'milk,' so we talked to a dictionary expert 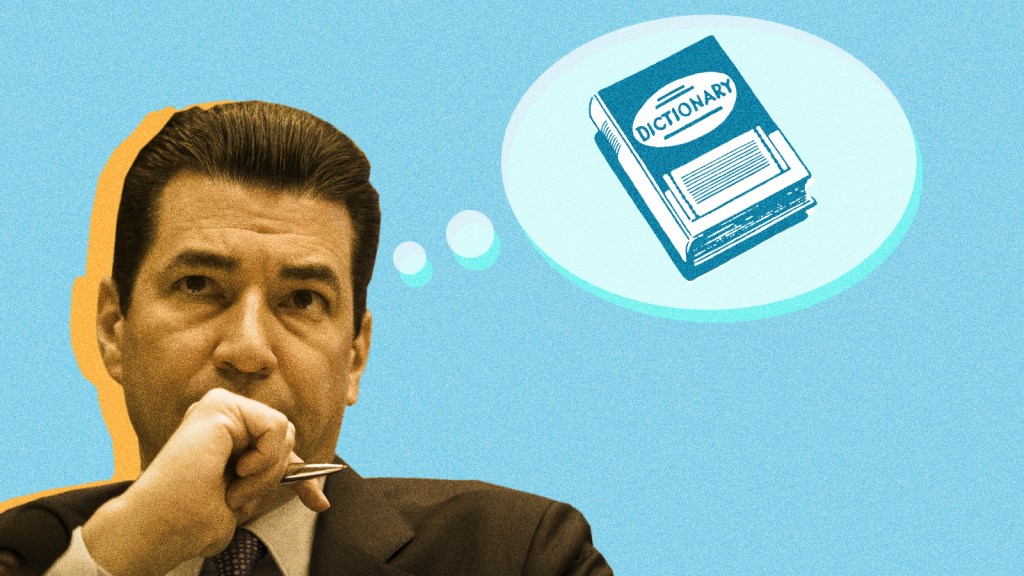 The FDA is confused about the definition of ‘milk,’ so we talked to a dictionary expert

As a young kiddo, you probably looked up from the book you were reading to ask some version of the following question:  “Mommy, what does ‘obnoxious’ mean?”

More likely than not, a lazy adult advised you to look it up in the dictionary. That advice, while annoying, was instructive.

Perhaps the U.S. Food and Drug Administration should take a page from the dictionary, too. The agency has expressed some confusion over the word “milk,” and whether plant-based beverages like almond milk should be labeled as such.

“You know, an almond doesn’t lactate, I will confess,” FDA’s commissioner Scott Gottlieb said at a policy summit earlier this month.

The dairy industry has been begging the agency to address this topic of concern for nearly 20 years in the hopes of getting “milk” banished from the labels of non-dairy, climate-friendlier alternatives like soy, almond, coconut, and oat milk.

Big Lactose’s dreams might finally come true. The FDA released an official statement Thursday saying it was reviewing the question of what’s milk, and what’s not.

“All the lexicographers I know groaned and said, ‘Oh boy, here we go,” says Kory Stamper, lexicographer and author of Word by Word: The Secret Life of Dictionaries.

“The FDA can decide whatever they want, but in terms of common usage, that use of [plant] milk is not going anywhere,” Stamper tells me. “It’s 600 years old.”

That’s right — almond milk actually dates back to the 1400s, according to Stamper.

Milk generally refers to the “fluid secreted by the mammary glands of females for the nourishment of their young,” as Merriam-Webster dictates, as well as milk from an animal “used as food by people.” The next definition, however, says that milk is also “a food product produced from seeds or fruit that resembles and is used similarly to cow’s milk,” as well as “a liquid resembling milk in appearance.”

Earlier this year, France decided to ban vegan foods from borrowing terminology from animal products (that means no more soy milk or vegan bacon). The justification? That consumers might confuse soy milk with dairy milk, for instance. There doesn’t seem to be much real confusion about whether plant-based milks are really milk milk, Stamper tells me.

The FDA seems to be taking a different tack than the French. Echoing the dairy industry, the agency’s statement suggests that when people hear “almond milk,” they might somehow think that it’s nutritionally equivalent to dairy milk. The nutritional comparison is another question in itself.

And the same discussion may soon turn to “meat.” As the debate heats up over what to call cell-cultured meat and meat alternatives, know this: While meat has referred to animal flesh since the 1300s, it was used for the flesh of a fruit or a nut (like the meat of a walnut) just a century later, Stamper tells me.

“It gets tricky when you start dealing with these general vocabulary terms that are really foundational,” Stamper says. “We think they have one clear meaning, but if you look at the history, their meanings are just not that clear. Their use goes back way further than we think.”

Gottlieb, the FDA commissioner, knows he’s up against a challenge. If the FDA decides to take the milk out of almond milk, it could end up embroiled in a legal battle over commercial free speech rights.

The dairy industry’s hope seems to be that if these increasingly popular plant-based milks can no longer be billed as milk, their sales might dip. Whatever ends up on the label, at least one person is likely to keep buying almond milk anyway.

And she’ll probably keep calling it almond milk, just like the rest of us: “Trying to change general usage once it’s well established is pretty impossible, so good luck with that.”