It’s a cloudy gray day in Cully, a neighborhood in northeastern Portland, and the air is thick with the smell of burnt tires. The culprit? An asphalt manufacturing plant, where black rubble is piled into one long heaping mound, waiting to be hauled off to areas across the city to fill in old potholes and pave new streets.

Cully is located in one of the city’s most culturally diverse pockets, but the predominantly low-income neighborhood is regularly subject to industrial pollution. Automobile salvage lots, including one that caught fire and spewed toxic chemicals into the air last year, litter entire city blocks with old car parts and used tires.

Across the street from the asphalt plant, a barren parking lot is cordoned off by a chain-link fence. This was formerly the site of the Sugar Shack, a notorious strip club and adult video store that was torn down less than two months ago. After the owners’ arrest in 2015 for tax fraud and running a prostitution ring, the lot became a meeting spot for neighborhood groups and community members. Now, thanks to a coalition of four local organizations that goes by the name Living Cully, the site will soon be home to a new affordable housing complex: Las Adelitas, named in honor of the women soldiers who fought during the Mexican Revolution. 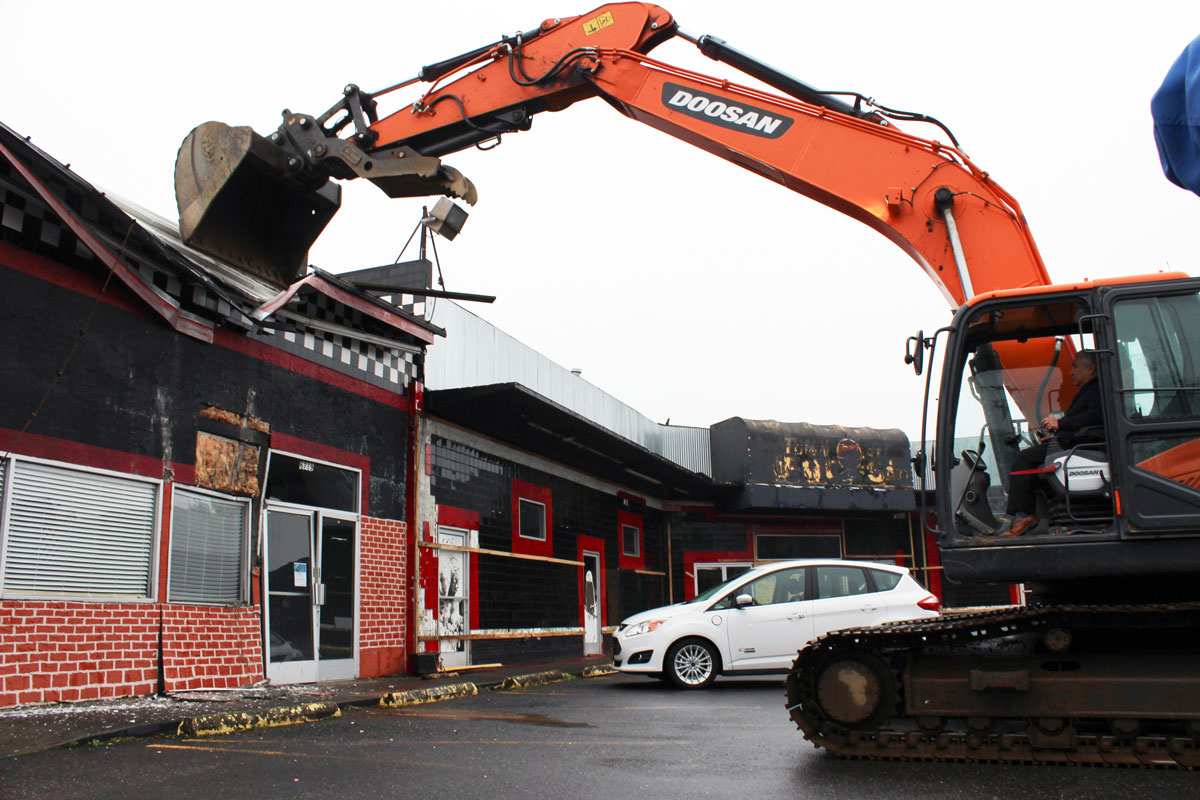 With a large crowd of community members as an audience, the Sugar Shack in Cully neighborhood is destroyed to make room for a new affordable housing development, Las Adelitas. Living Cully

On the surface, this housing complex in one of the most rapidly gentrifying corners of the country will be much like any other development designed to help respond to the national housing crisis. But dig a little deeper, and Las Adelitas has the potential to become a model for much more — a solution not only to the displacement of longtime residents but to the lack of green investment in the low-income communities of color that are already on the front lines of the looming climate change crisis.

Dig deeper still, and Las Adelitas — together with the whole Living Cully framework — begins to look a lot like the much-touted Green New Deal: a preliminary plan touted by Democratic congressional members to create a “green workforce” that will build out green infrastructure and clean energy projects while bringing economic opportunities to vulnerable communities. The long-term success or failure of Living Cully could provide a window into an ambitious national program that’s still in the visionary stage today. 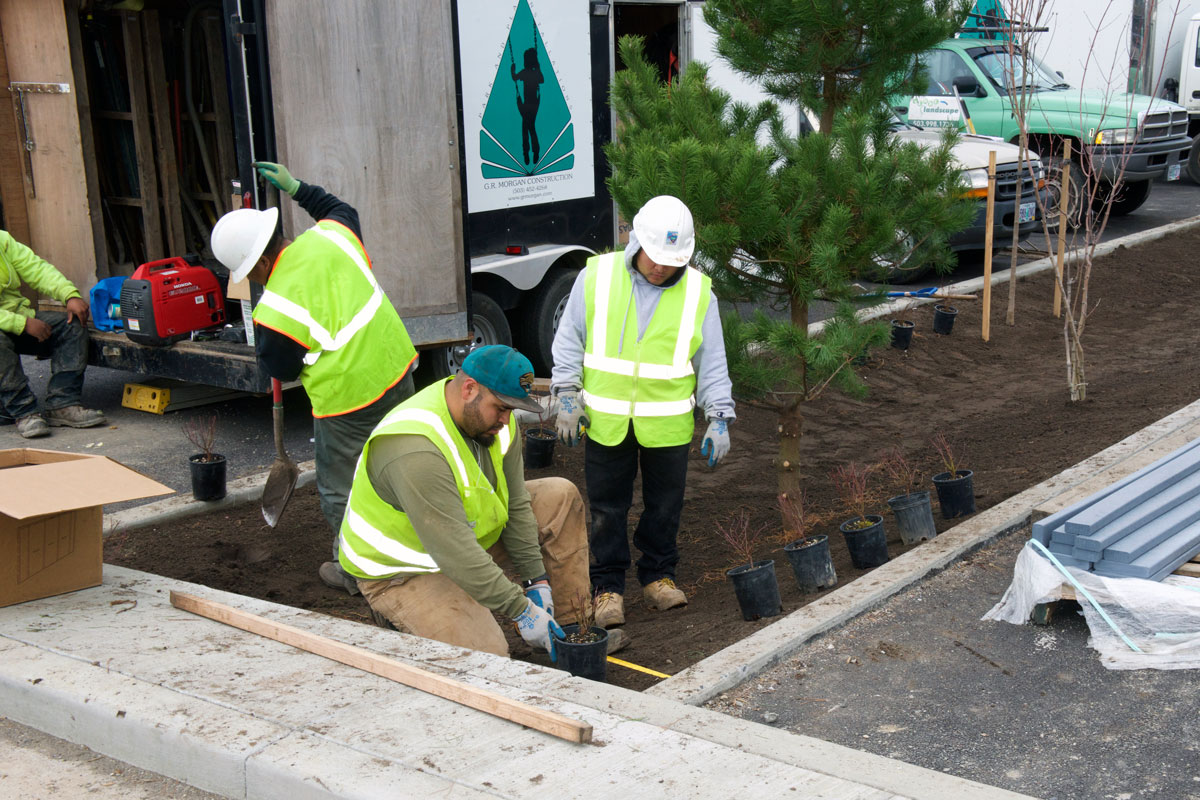 When the Great Recession hit in 2008, Mateo Fletes Cortes, who lives in the town next to Cully, lost his job. Originally from Nayarit, Mexico, Fletes Cortes moved to Oregon with his uncle in 2002, picking up work in construction, building out wooden window frames, installing baseboards, and adding finishing touches to buildings and houses. But when the construction industry collapsed, so did Fletes Cortes’ job stability. He’d heard about opportunities in landscaping work but been reluctant to apply, associating landscaping with unskilled low-wage labor. Then he heard about Verde.

The area nonprofit, which is also the lead organizer of Living Cully, operates a landscaping company called Verde Landscaping. The business was started in 2005 in order to train and employ residents to do sustainable landscaping for affordable housing developments built by Hacienda CDC, a Latino Community Development Corporation. Hacienda is also a member organization of Living Cully, and the owner of Las Adelitas. At Verde, wages start at $13.50 an hour and increase to $18.50 by the third year of employment, with paid training sessions and certification provided, as well as medical and dental benefits. So far, the program has trained over 200 area residents in jobs like stormwater management and habitat restoration, according to Verde’s executive director, Tony DeFalco. Ironically, as the economy has picked up in recent years, it’s become harder to recruit labor for the training program, DeFalco said. “You’ve got historically low unemployment, and so it can be really challenging to be competitive.”

Through Verde’s workforce training program, Fletes Cortes took English classes, received industry certifications, and learned that landscaping was indeed for him. “As fate would have it, I started to work in habitat restoration,” something he’d previously known nothing about, Fletes Cortes said. “I saw that [landscaping] wasn’t just about working a lawnmower.” Rather, it could be about restoring wildlife habitats or redirecting stormwater to hydrate vegetation and native plants and shrubs.

These days, Fletes Cortes spends a lot more time in the office, having been promoted to landscape crew supervisor. Bidding for landscaping contracts and checking on equipment and crewmembers keep him busy. He’s been with Verde for a decade, and today, he manages other employees in the workforce program. When the Las Adelitas project gets fully underway, it will be highly skilled workers like Fletes Cortes who carry out the necessary landscaping and subsequent maintenance work for the planned 140 affordable housing units and ground-level commercial spaces. 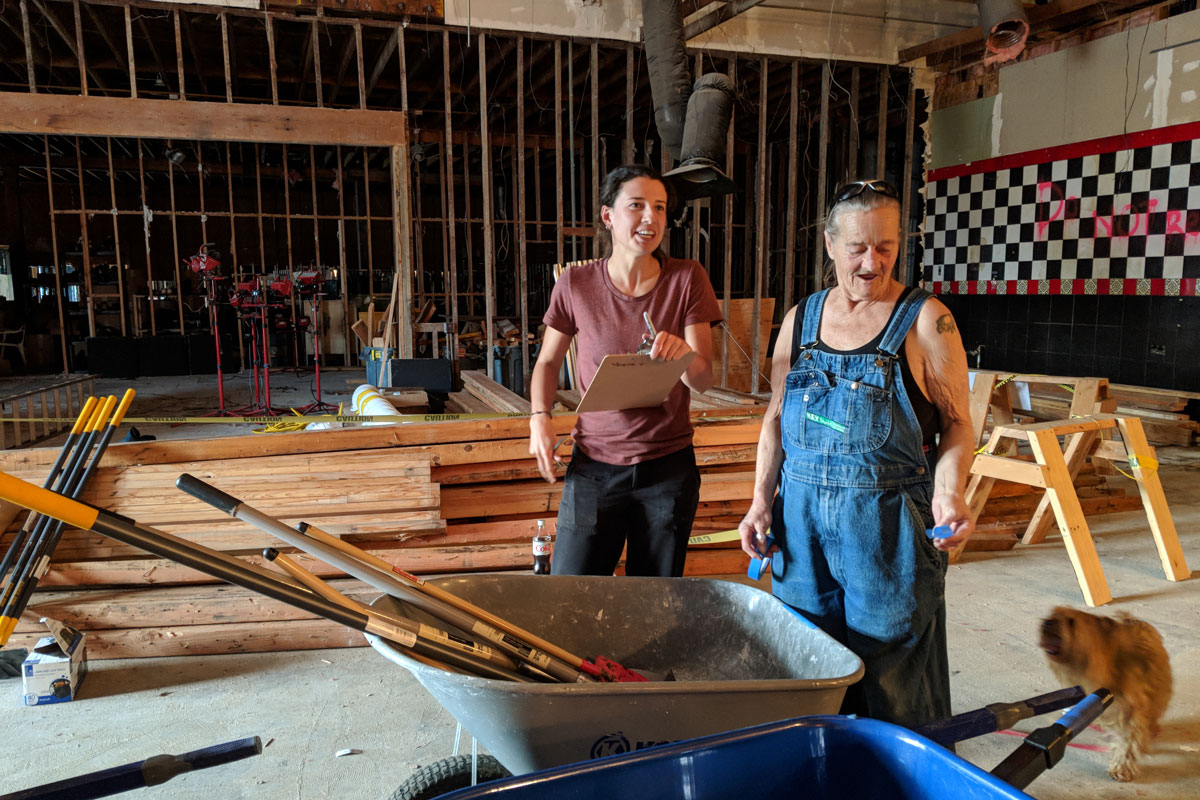 Living Cully’s motto can seem counterintuitive at first: “Sustainability as an anti-poverty strategy.” After all, it’s now widely believed that the more green investments like parks and vegetation appear in a neighborhood, the more desirable (and expensive) that place becomes, often pushing longtime residents out of their homes and neighborhoods. The phenomenon even has its own trendy name: “green gentrification.” This is certainly a challenge in Cully, where, despite anti-displacement efforts, housing prices are in fact rising. But DeFalco believes that pairing housing projects with environmental investments will be key to the project’s success. “[That] is a really simple recipe for proofing the community against green gentrification,” he said.

That experiment is coming together in Las Adelitas: Verde Builds will construct the building’s green features; green roofs and walls, solar panels, water reuse systems are all being considered in the design. Verde Landscaping will provide local skilled workers to build out green stormwater infrastructure as well as sustainable landscaping. The housing project is expected to be completed by 2020.

In addition to Las Adelitas, Living Cully partners are not only creating energy-efficient affordable housing but also preserving existing low-income housing, through initiatives like a mobile home weatherization program that aims to lower bills of low-income residents who pay a disproportionate amount of their paychecks to utilities. And there are other benefits: That weatherization allows low-income residents to lower their energy use and therefore, their carbon footprint. In August, Portland City Council passed a new zoning designation to protect mobile home parks in Portland from redevelopment, thanks to organizing efforts by Living Cully partners and other area organizations.

As Congress continues to figure out what a Green New Deal might look like on a national scale, Cully could become a valuable and tangible model community to turn to for inspiration. “We are at a place now, where — as a nation — we can no longer make an environmental investment without social and environmental justice outcomes,” DeFalco said. “What we’ve been able to do here at a smaller scale is basically to demonstrate how you do that.”