A key factor in the momentum behind the Green New Deal is its promised blend of environmental policy, job creation, and social justice — specifically centering on the experiences and voices of those most affected by climate change and the fossil fuel industry. Speaking at a press conference introducing her new resolution for a Green New Deal on Thursday, Representative Alexandria Ocasio-Cortez called it “a really big day” for social justice and indigenous peoples.

But some critics say the legislation as it’s currently written falls short when it comes to protecting the vulnerable communities key to the heart of the resolution. Instead of calling for a carbon-free economy, the resolution lays out a plan to achieve “net-zero” greenhouse gas emissions in ten years by implementing “clean, renewable, and zero-emission energy sources.”

A Green New Deal that leaves nuclear, carbon capture, on the table

There are two phrases to pay close attention to there: net-zero and zero-emission energy sources.

Basav Sen, climate justice project director at the Institute for Policy Studies, tells Grist that the term “net-zero” is a red flag for many environmental justice advocates who were pushing to eliminate emissions in the first place. In contrast, Sen says “Net-zero” means the resolution would allow high-carbon emitters to continue to operate, but offset their emissions with green projects or use emerging technology that scrubs carbon either from polluting point sources or directly from the atmosphere.

“Net Zero emissions, which equate carbon emission offsets and technology investments with real emissions reductions at source, would only exacerbate existing pollution burdens on frontline communities,” Angela Adrar, executive director of the national Climate Justice Alliance wrote to Grist. Carbon offsets are not always located in the same communities where the emissions are created, resulting in a pollutants concentrating in communities bordering polluters.

“Our communities can no longer be used as sacrifice zones,” Adrar said.

And what about the phrase “zero-emission energy sources?” Turns out that doesn’t necessarily bode well for vulnerable communities either. As Grist’s Nathanael Johnson writes, “In wonk-speak, ‘zero-emission is code for nuclear power or fossil fuels with carbon capture.”

Dallas Goldtooth is a campaign organizer for the Indigenous Environmental Network, which is one of several environmental justice groups who reject the idea of Green New Deal that leaves the door open to an energy mix that includes fossil fuels and nuclear energy. It’s part of a larger movement to keep fossil fuels and uranium, a necessary component for nuclear energy, “in the ground.”

“While we applaud its intentions, we feel that [the resolution] falls short in protecting indigenous communities,” Goldtooth told Grist. “Explicitly talking about keeping fossil fuels in the ground, that’s a critical issue.”

Uranium has a dark history in many indigenous communities. The Navajo Nation is still grappling with the legacy of uranium mining on its land — where 30 million tons of uranium ore were extracted between 1944 and 1986. An ongoing study into Navajo births found traces of uranium in newborns’ systems and recorded high levels of uranium in adults’ urine in nearly 30 percent of its roughly 600 participants. Uranium contamination has been linked to kidney failure and cancer, both of which are prevalent in the community, according to a 2016 NPR report.

Resistance to the Dakota Access Pipeline and other energy infrastructure projects on Native American lands have also been top of mind for adherents of the “keep it in the ground” mantra.

“The last remaining pockets of fossil fuel reserves are typically adjacent or on tribal lands,” Goldtooth says. “So when the Trump administration says he wants to expand fossil fuel production, Indian Country is in the bullseye — it’s the target.”

Goldtooth is quick to point out that after advocating for a more inclusive process around the Green New Deal, the Indigenous Environmental Network was invited to meet with Representative Ocasio-Cortez as she consulted with groups to help inform her resolution.

“We really sincerely hope to be constructive partners as we move ahead and as the language evolves and changes,” he says. He wasn’t surprised that some concessions were made to get folks on board who take a less harsh approach to supply-side policy. “We know how it works in Washington D.C. We know that compromise is the name of the game.”

Check out this message from Rep. Alexandria Ocasio-Cortez. @CJAOurPower was excited to share our vision for a #JustTransition & the #GreenNewDeal with @RepAOC
CJA members shared their solutions and brought the frontlines 2 Capitol Hill.
#ClimateJustice #GreenNewDeal #GND @AOC pic.twitter.com/thV01fWssI

An FAQ on the Green New Deal that was taken down from Ocasio-Cortez’s website the same day the resolution was unveiled, indicates that she supports a transition off nuclear energy and that she prefers natural carbon capture methods like planting trees over man-made ones. But her team writes that an outright ban on fossil fuels, nuclear, and carbon capture, may be too much too soon.

“We set a goal to get to net-zero, rather than zero emissions, in 10 years because we aren’t sure that we’ll be able to fully get rid of farting cows and airplanes that fast,” the page read. “Simply banning fossil fuels and nuclear plants immediately won’t build the new economy to replace it – this is the plan to build that new economy.” After a blizzard of criticism from conservatives over the weekend, however, Ocasio-Cortez distanced herself from statements made in the FAQ and pointed instead to only the language in the resolution itself.

There are multiple doctored GND resolutions and FAQs floating around. There was also a draft version that got uploaded + taken down. There’s also draft versions floating out there.

Point is, the real one is our submitted resolution, H.Res. 109: https://t.co/ZlgWmNQn57

“We are open to whatever works”

Massachusetts Senator Ed Markey, who introduced the resolution alongside Ocasio-Cortez, said on Thursday that while the resolution is “silent” on individual technologies and doesn’t specifically mention nuclear energy or carbon capture and storage, “we are open to whatever works.”

There are plenty of environmentalists who believe that every tool at our disposal should be utilized to avoid a climate crisis — including nuclear energy and carbon capture. Looking at the scenarios that scientists have laid out in order to keep the world from warming below 1.5 degrees Celsius (the benchmark the Intergovernmental Panel on Climate Change identified as necessary to avoid the worst impacts of warming world) there is broad scientific consensus that ending dependency on oil and gas will require expansion of nuclear energy and/or some form of carbon capture.

“You have to be realistic about your political strategy to succeed,” said David Hawkins climate policy director at the Natural Resources Defense Council. “Having carbon capture and storage as part of the policy toolbox makes it easier to adopt those tougher carbon regulations on the power sector.”

Rob Jackson, chair of the Global Carbon Project and Stanford’s Earth System Science Department, says he believes the U.S. needs either nuclear power or carbon capture and storage (for example, paired with natural gas) to provide grid reliability and to reduce energy costs (“That’s blasphemy for some of my environmental colleagues,” he added). Julio Friedmann, a leading expert on carbon capture and storage and a senior research scholar at the Center for Global Energy Policy at Columbia University, says that “the argument shouldn’t be ‘keep it in the ground,’ it should be ‘keep it out of the air.’” He believes the technology to sequester carbon is ready for prime time, and that it just lacks the political will to get the ball rolling.

While the Climate Justice Alliance worries that carbon capture technology will delay the fossil-free future they want to see, Friedmann (who previously worked as a senior research scientist at ExxonMobil) doesn’t see Big Oil and Gas going away any time soon. “The idea that carbon capture and storage is somehow extending a lifeline to a fossil fuel industry that’s dying is ludicrous. We’re still using boatloads of this stuff,” says Friedmann, pointing to a global increase in the use of natural gas.

There are scientists looking for a pathway to meet the 1.5 degrees C goal without expanding nuclear energy or including carbon sequestration. Researchers at University of Technology Sydney’s Institute for Sustainable Futures worked on a climate model that aims to achieve negative emissions using natural climate solutions, such as forest restoration, “along with a transition to 100% renewable energy by mid-century,” according to a press release. Lead researcher Sven Teske told Grist he hopes the model will catch the attention of scientists at the United Nations’ Intergovernmental Panel on Climate Change. But he worries about the model’s reliance on restoring forests as major carbon sinks like the Amazon are becoming more vulnerable to deforestation.

Basav Sen says that calling for an end to resource extraction is “a much harder lift than getting to 100 percent renewable energy.” However, “If we still dig up the stuff and transport it elsewhere… If [people] continue to face environmental impacts from the transportation of fossil fuels, whether it’s pipelines or trains…then we continue to have frontline communities facing serious environmental problems.” 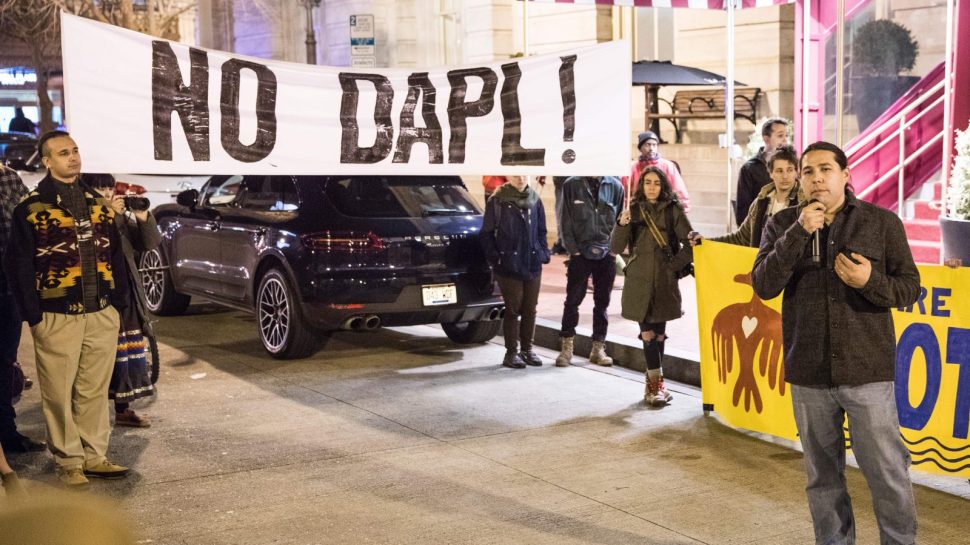 With the health of their homes and families at stake, Goldtooth says his network wants to keep working with Ocasio-Cortez and others on how the Green New Deal’s language will continue to take shape.

“We don’t want to be seen as the black sheep of the climate justice movement,” says Goldtooth. “But we also have a mandate to ensure that we are doing the greatest amount of work to protect our communities and to protect Mother Earth. We want to work with legislative leaders to make the policies that work the best.”