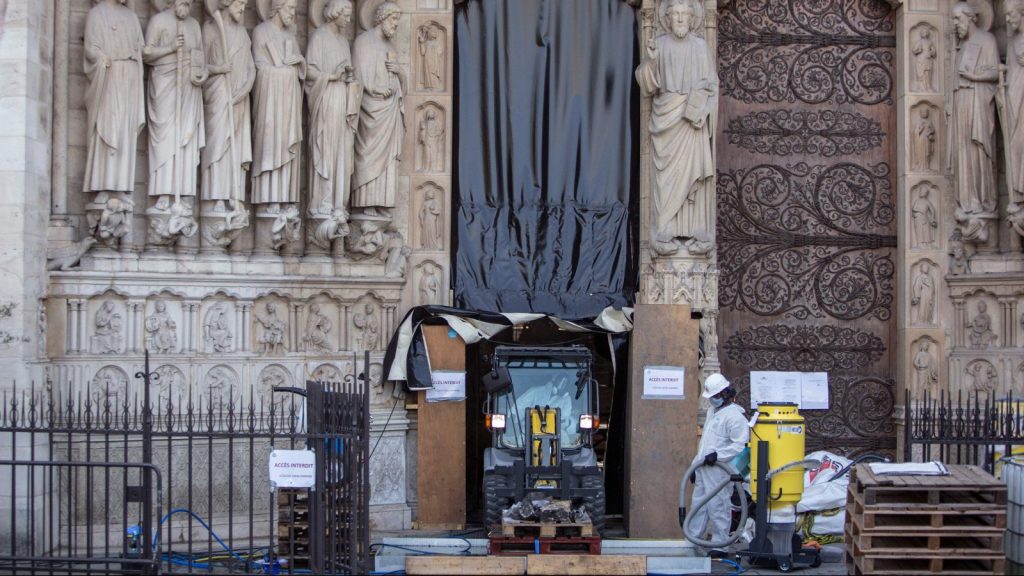 Three months after the devastating fire at Notre-Dame Cathedral in Paris, reports of a new, previously unheeded threat to local residents have emerged: lead poisoning. According to confidential documents leaked to the (paywalled) website Mediapart earlier this month and discussed across French media, locations surrounding the fire-damaged cathedral have registered levels of lead contamination ranging between 500 and 800 times the official safe level. The building’s roof and spire were clad in several hundred tons of the metal, which can be toxic if particles are inhaled or consumed, especially to children. The blaze that consumed the cathedral’s roof liquified oceans of lead and lofted a plume of lead particles across the city.

This month’s lead alert has triggered the indefinite closure of two local schools and a halt to all work on the cathedral site. Yesterday, the French environmental NGO Robin Des Bois announced that it will take the city of Paris to court, accusing it of neglecting public health and even of “deliberate endangerment of people.” The dispute raises some troubling, and not yet fully answerable questions. Why did the city not reveal the possible public health dangers related to the fire sooner? And exactly how badly has the region been contaminated?

Parisian authorities must surely have been aware of the scale of the disaster they were dealing with. When fire attacked the massive medieval structure on April 15, 450 tons of lead that made up the roof’s various layers melted. In temperatures exceeding 800 C (1,472 F), gobbets of fluid metal splashed and contaminated the church’s stonework throughout. As the smoke’s yellow tinge suggested, lead was also vaporized, creating what Robin Des Bois called a “toxic fallout” of lead dust that was deposited downwind.

On May 13 — almost a month after the fire — the city of Paris first tested lead levels at schools and kindergartens near the cathedral, apparently informing principals in the affected area that there was no significant health risk. Meanwhile, advice made public to residents on and near the Île de la Cité by the Ile-de-France Regional Health Agency went no further than advising everyone to clean away dust with a wet cloth, and seek medical advice “if necessary.”

This month’s revelations, however, suggest that the official response fell far short of the mark, and that the city erred in failing to inform residents of potential dangers. They report that lead levels at some schools, which are being used at times during the summer vacation for children’s leisure facilities, have registered levels up to ten times higher than that at which an alert is normally triggered.

The city’s reaction to the allegations has been complex and not entirely reassuring. “All the data that we have been able to collect so far show that the health of the population has been preserved,” insisted the director of the regional health authority on July 19. Lead levels surrounding the cathedral are unquestionably high, but the safe level they exceed — 1,000 micrograms of lead per square meter — is one specified for enclosed indoor spaces. Paris has no official limit on lead contamination levels in public roads, and due to the historic use of lead in building materials, piping, and as a vehicle fuel additive, the average presence for a Paris street is around 5,000 micrograms per square meter.

Meanwhile, local rules state that any school building should be evacuated and thoroughly cleaned if interior lead levels reach 70 micrograms per square meter. While elevated levels are always a cause for concern, the health authority says that “average levels of samples taken in schools are below the standards and do not justify a health alert.”

But that’s only true, say the journalists of Mediapart, if you take an average of readings across a single building. While an overall average may suggest a safe level, lead concentrations in some schoolyards have in places shown to exceed the city’s baseline. Exposure of children in these spaces may not be extreme enough to provoke symptoms of acute lead poisoning — which include reductions in mental capacity, kidney damage, hypertension, anemia, and reduced immunity. But there is, in fact, no threshold below which exposure to lead can be deemed safe. The long-term public health effects of chronic lead exposure on children in low-income urban areas is a topic of much ongoing debate — lead poisoning has been linked to the 1980s crime rise in U.S. cities, for example. The effects of mass exposure on children near Notre-Dame are difficult to anticipate.

This also goes for other areas of the city. Although the city has closed off the area immediately surrounding the cathedral, levels of lead in open areas just beyond the perimeter remain alarmingly high. At nearby Place Saint Michel, for example, they have reached as high as 28,400 micrograms per square meter — almost six times the usual level.

It’s perhaps understandable that the city might wish to get Paris back to normal as quickly as possible after the fire, which struck one of the city’s historic icons. But the ongoing fallout is likely to make the upcoming lawsuit against the city extremely uncomfortable, as their potential negligence will come under scrutiny. “When the fire was raging, the authorities knew that there were several hundred tons of lead between the roof and the spire,” Charlotte Nithart, the director of the Robin Des Bois told newspaper Le Parisien. “They should have immediately taken measures of confinement, or have removed the population.”