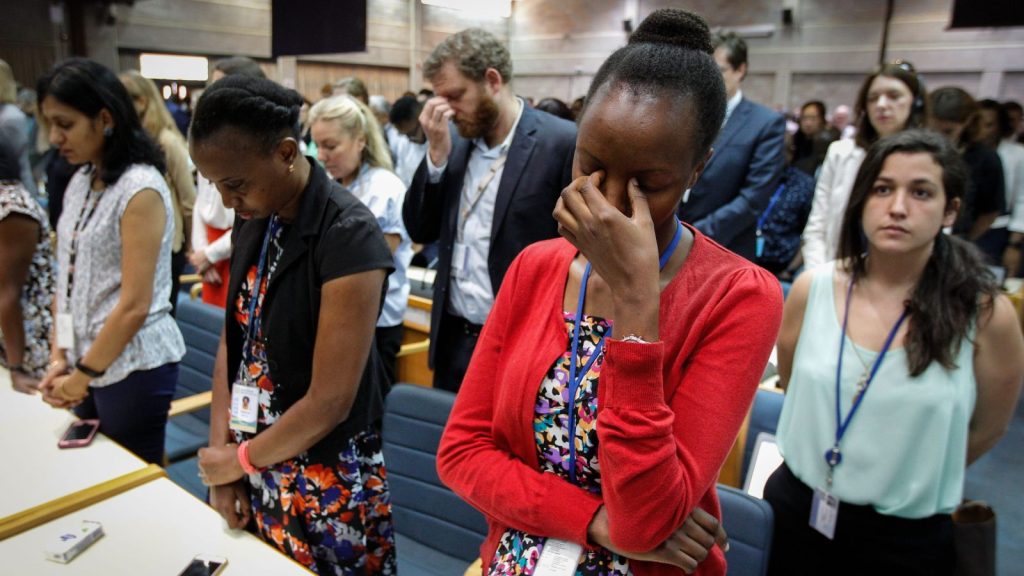 Just six minutes after taking off from Addis Ababa on Sunday, Ethiopian Airlines Flight 302 lost contact with air traffic controllers and went down, killing everyone on board. In that moment, the world lost agents of change across multiple humanitarian and environmental movements. Many of the 149 passengers were headed to the fourth United Nations Environment Assembly in Nairobi. Among them were conference attendants leading work to end global hunger, take on plastic pollution in oceans, and make connections between climate change and gender inequity.

The event, attended by 4,700 people from around the globe, opened on Monday with a moment of silence for those who didn’t make it to their seats at the conference. Flags were flown at half-staff.

“Today we are starting with a somber mood,” said Joyce Msuya, acting executive director of the U.N. Environment, in a video statement. “We have lost our U.N. colleagues and other members of the environment community.”

The environmental community is in mourning today. As we begin the fourth UN Environment Assembly in Nairobi, we came together to remember those we have lost in the crash of the Ethiopian Airlines flight. https://t.co/DEIWdW2tQt pic.twitter.com/WoVagVvxlS

The United Nations lost at least 22 staff members across its affiliate organizations. Seven of the victims worked for the U.N.’s World Food Program. “As we confront this terrible loss, we reflect that all these WFP colleagues were willing to travel and work far from their homes and loved ones to help make the world a better place to live in,” the agency said in a statement. “That was their calling.”

Victims hailed from 35 countries; more than 30 of those on board were Kenyans, including six who worked in the U.N.’s Nairobi office. The United Nations Environment Program is also headquartered in the Kenyan capital.

Joanna Toole, from the United Kingdom, was on the flight to the conference as a representative of the U.N. Food & Agriculture Organization, working in its fisheries department. She described herself on LinkedIn as a specialist in marine conservation and animal welfare who was “passionate about creating sustainable change.” Her recent work focused on the environmental impacts of commercial fishing — especially from discarded fishing gear, which happens to make up a majority of the notorious 79,000-metric-ton pile of garbage floating in the Pacific.

Also on the flight was Sarah Auffret, a French-British environmental agent at the Association of Arctic Expedition Cruise Operators. She was planning to discuss how Arctic expedition cruise vessels can cut down on single-use plastics.

Another victim was Victor Tsang, program officer of the United Nations Environment Program’s Gender & Safeguards Unit from Hong Kong. He leaves behind a son and his wife, who is expecting. “When gender inequalities are so obvious, a business-as-usual approach will surely lead to exclusion and further marginalization of women,” Tsang said in a 2017 interview on the U.N.’s efforts to make gender a key component of its environmental work.

An excellent article – Raise a feminist son – that's why I dressed my son in pink :) https://t.co/2rfTcTnL8N pic.twitter.com/HxmZvf0H63

Delegates to the conference will meet throughout the week to discuss strategies for greening global consumption and production and helping the world achieve the climate goals set out in the Paris Agreement.

Even as global leaders remember the legacies of those lost, they are calling on their peers to take bold action. “We have compelling science that lays out the urgency with which we must act,” said Msuya. “We can no longer grow now and clean up later. We have reached the planet’s limits.”

“In the wake of this tragedy, it has been difficult to navigate how to proceed without showing disrespect to the many lives lost yesterday,” said Maimunah Sharif, acting director-general of U.N. Office in Nairobi and executive director of U.N.-Habitat, in a statement. “As the day and week unfolds, and the world’s global environmental leaders meet to discuss the future of our planet, we will not forget this tragedy, nor those that perished with it.”