This Lakota man is helping indigenous communities flourish -- on their terms 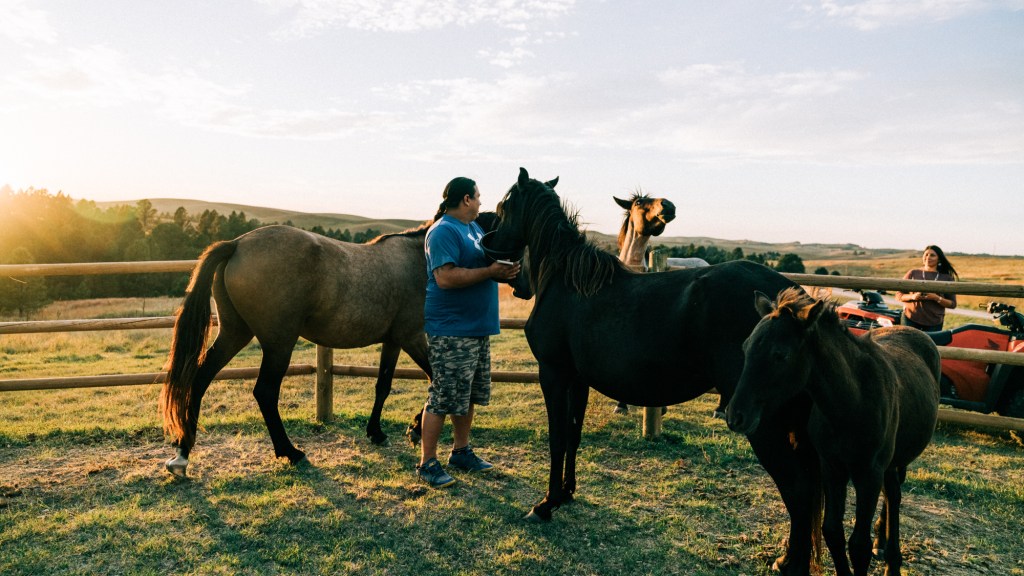 This Lakota man is helping indigenous communities flourish — on their terms

In some parts of the country, the undeniable tragedy of COVID-19 has spurred discussions of reinvesting in our communities — funds, relief efforts, and creative endeavors have emerged all over the world to support frontline workers, keep people connected, and build a path forward. Grist 50 Fixer Nick Tilsen is behind one such effort as the president and CEO of NDN Collective, an organization dedicated to building indigenous power and creating sustainable solutions on indigenous terms.

Tilsen is a citizen of Oglala Lakota Nation and lives on the Pine Ridge Reservation in South Dakota. He describes himself as having grown up in the American Indian Movement. His parents met at the Wounded Knee Occupation of 1973, and Tilsen says he sees the world through the lens of an organizer, which has led him to be an “accidental social entrepreneur.” I talked to him about his work before and after COVID-19, and what he envisions for the future. His responses have been edited for length and clarity.

Q.What does it mean to be an “accidental social entrepreneur”?

A.I played a focal role in starting different organizations like Defenders of the Black Hills, Lakota Action Network, and the Indigenous Peoples Power Project, and then went on to found an organization called Thunder Valley Community Development Corporation. The whole concept was: Could we build a community from scratch with some of the highest standards of regenerative and sustainable development in the poorest place in the country, here on Pine Ridge? Standards like 100 percent water reclamation, 100 percent energy generation, the rebuilding of a regional food system that can feed our people and regenerate our economy.

Thunder Valley became a national model that was beginning to be uplifted throughout Indian country, and even outside of Indian country. As that national model was being lifted up, I was contacted by a lot of different tribes — 70-plus indigenous nations — who said, “Hey, we want to do the same thing that you’re doing, but within the context of our own culture, climate, and spirit of place.” My reaction to them was: “One, we’re barely pulling this off! Secondly, don’t do what we’re doing, how we’re doing it. I really wouldn’t wish that madness on anybody!”

Q.Did you feel a lot of pressure to grow and expand your impact?

A.We had close to 50 philanthropic partners at that time at Thunder Valley. And of course, they started licking their chops, as philanthropy likes to do — no offense to the people who are in philanthropy — and started talking about scale. And I said, “Well, I don’t know what scale would look like in this particular situation, because our cornerstone of the indigenous rights movement is about tribal sovereignty and self-determination.” Meaning, I’m not going to go into Akwesasne, I’m not going to go into Dene territory, or Lumbee, or Chumash and tell them what they should do — just like I don’t want them coming into my community telling me what I should do.

Q.How did you respond?

A.I looked at the data of the extreme underinvestment in native communities and I said, “I’ll launch an organization that is movement infrastructure by and for indigenous people, to challenge the power structures that exist in the investment community and in the field of philanthropy.”

We have to create indigenous-led and people-of-color-led institutions that have lived experience, practitioner-based knowledge doing this work on the ground. That’s when NDN Collective was born.

Q.How are you doing philanthropy differently?

A.One goal is to build a $50 million annual grantmaking fund, which would be the biggest philanthropic fund ever dedicated by and for indigenous people. Obviously, our people need more than $50 million of grantmaking. But, all of a sudden, who’s setting the dinner table, and disrupting the power structures that exist, and who has the moral high ground to set the trends of philanthropy as it relates to indigenous people? That’s the theory of change, right there. That’s the shift of power.

For us to do that successfully, it means that people in positions of power, and the people who have been doing wealth-hoarding and who have been causing many of the problems that we’re trying to fight, actually have to give up some of that money and some of that decision-making power to impacted people.

A.We’re in an uphill battle, but it’s a new system that we believe in, that we’re fighting for. We’ve created a couple of awesome grantmaking programs that are fundamental to catalyzing this work.

One of them is a community renewable-energy grant program, funding work in multiple indigenous communities that are doing a just transition away from the fossil fuel industry. We have an Indian Changemaker Fellowship program that is an investment into indigenous leaders and changemakers to radically think about how they believe change happens in the world and how they see themselves in it. And we have a self-determination grantmaking program of six-figure grants to indigenous-led organizations, so that they can build out their organizations to create impact and change. A lot of trickle-down philanthropy has resulted in project-based funding in Indian country, as opposed to building strong institutions.

We also have a lending arm, an investment arm called the NDN Fund. As people divest from the fossil-fuel industry, divest from the prison-industrial complex, divest from the shitty things that are destroying the environment, they can invest into an indigenous-led fund that is able to take projects to scale. We go to the places that banks don’t go.

Q.Cultural change and art are central to NDN Collective. What’s the role of art in spurring big change?

A.The artists, culture-bearers, storytellers — they’re the interpreters of everything that we see. When you start leading with them, and integrating them into processes, it changes the entire process. Period. And it makes it more robust, it makes it more resilient, it actually brings out the creativity of the people who don’t even think of themselves as creatives.

Q.What about activism? Like the Standing Rock movement and other pipeline battles that you’ve been involved in? Not everyone thinks of those as paired — the idea of protests and solutions as being two sides of the same coin.

A.I call it “two frontlines” — we have to be pushing on both fronts. NDN Collective is an ecosystem that is built to do that.

The tension between frontline activism and development work is the gem of where the work happens, because it creates a different kind of accountability. If we’re going to be developing renewable-energy systems, creating social enterprises to build community wealth over here; in the same house, we’re creating nonviolent direct action strategies to shut down the fossil fuel industry, right over there. When that stuff is happening in the same house, you end up shortening the distance between those two things. What happens is you start keeping those things accountable to one another.

Q.How does that play out during this time of COVID-19?

A.The pandemic has begun to take off in these already extremely under-invested, poorest, most isolated communities in the country. There’s a lot of immediate response that’s needed. We’ve launched a goal of creating a $10 million COVID response, with two sides. The first $5 million of it is dedicated to this immediate response, to fund things like PPE, water access, food delivery, all the sort of immediate-response things that people need. The second $5 million is dedicated to this idea of making our communities more climate-resilient for the future, the development of local and regional food systems, that kind of stuff.

Of the $10 million goal, we’ve raised $4 million so far. The cool thing is, we’ve already deployed over $2 million to frontline indigenous communities throughout the country. This is the biggest indigenous-led COVID response strategy that’s taking place in the nation.

Q.Can this pandemic period also be a time to build a better future?

A.Do we want to go back to the old? The way things were, pre-COVID? Or is this a world that we’ve been trying to architect and build that’s more connected to our values? We see this as a pivot moment. We act like the world has realized many of the things that some of us have been talking about for generations: that we need to democratize the energy system, build local and regional food economies that decrease the footprint on the climate and improve the health of the community, get away from bailing out corporations and corporate structures, and build community wealth and structures aligned with the values of the people. In other words, actually create a better world and make us more resilient.