This low-income Houston neighborhood was recovering from last year's flood. Then Harvey hit. 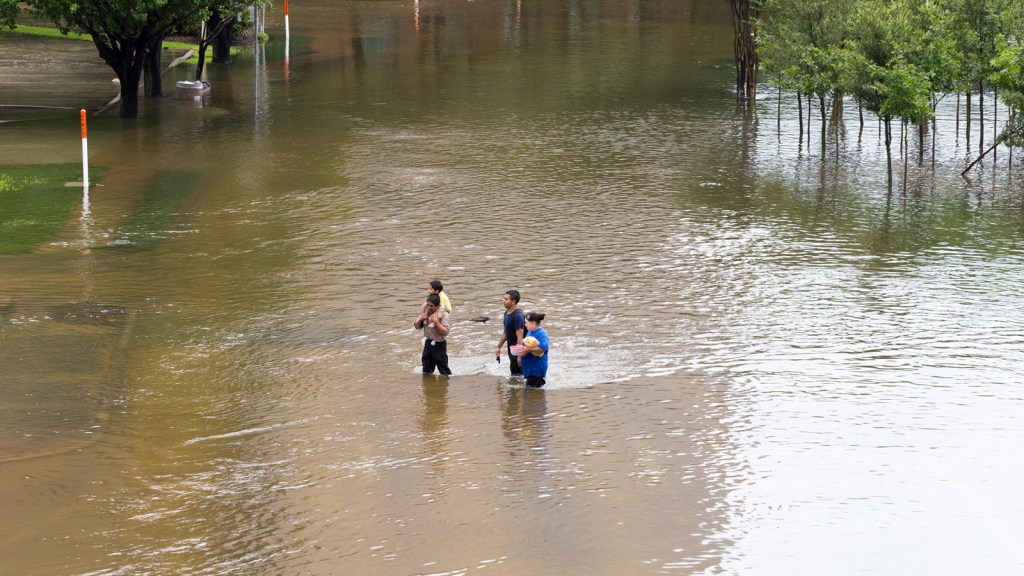 This low-income Houston neighborhood was recovering from last year’s flood. Then Harvey hit.

Tropical Storm Harvey dropped more than 50 inches of rain in Houston and the surrounding area, which has caused “life-threatening” flooding. Thousands of people have been rescued from their flooded homes and at least 30 people have died. But for residents of the Greenspoint community, the unprecedented storm hits them when they have still not yet fully recovered from another catastrophic deluge last year.

In April 2016, during a storm that was dubbed the Tax Day Flood, the Houston area saw 15 inches of rain in 24 hours, with most of it falling within a 10-hour period. Hundreds of people were rescued from the floods and eight people were killed. The devastation was citywide, but Greenspoint — an impoverished community with more than one of three residents living below the federal poverty line — bore the brunt of it. Alarmingly, 72 percent of Greenpoint’s multi-family housing is in a flood zone, so during the Tax Day Flood around 2,000 of those apartment homes flooded — some were still waiting for repair when Harvey struck.

Poor people are more likely to live in places that are especially vulnerable to flooding and Houston is no exception. The city has no environmental zoning laws, so property owners decide how the land is to be used. In wealthier neighborhoods, residents have the political clout to invest in flood protections such as dikes to keep the water out; poorer residents do not. Several months after the flooding last year, residents of Greenspoint were still living in water-damaged and moldy units. Many residents didn’t have the resources to move.

By Sunday morning, the same neighborhood that had flooded last year was flooding again. While officers from the Houston Police Department used boats to help residents at the Arbor Court Apartments evacuate, the water on the surrounding roads had already reached neck-deep levels.

Elsewhere in the community, residents struck out on their own to assist with rescue efforts.

Residents have tied two kayaks to a speed boat to try to rescue people stranded in Greenspoint's floodwaters. pic.twitter.com/8Up4l0hUrX

Reports showed that the water was reaching the same level as street signs by Sunday afternoon.

The water here near #Greenspoint is rising slowly as the showers alternate between light and heavy. Lots of cars stranded along BW8. #KHOU11 pic.twitter.com/HVJPHNvKkU

By Tuesday, the Red Cross shelter in the area was running out of supplies and space.

Greenspoint offers affordable housing, which is one reason families have remained in the community and newcomers move in, despite how vulnerable it is to flooding. The federally subsidized but privately-owned Arbor Court Apartments are reserved for families of four making $34,600 a year. The 900 low-income families who live there must pay about one-third of their income in rent, and the government pays the rest.

For privately-owned buildings, the government does not consider whether the building is in a flood zone before it decides to subsidize rent. The Department of Housing and Urban Development began subsidizing rent for the Arbor Court Apartments in 1991, which was six years after the Federal Emergency Management Agency listed the property in a flood zone.

After the Tax Day floods, Houston officials suggested the idea of a buyout for the Arbor Court apartments, which included demolishing the building and turning it into a flood detention basin, but the plan never materialized.

To complicate matters, low-income people do not possess the resources necessary to evacuate safely during a disaster: cash for food, gas for travel, and some place dry to stay. And rebuilding can be an even more monumental task, as can be seen by the slow recovery from last year’s flood. This year, some residents evacuated while others chose to stay.

Nora Martinez, a 46-year-old Greenspoint, resident initially told the Houston Chronicle on Saturday that she wasn’t afraid of Harvey. However, when she thought about the last year’s storm she changed her tune. “I’m a little scared,” she said. “Because I already went through this.”