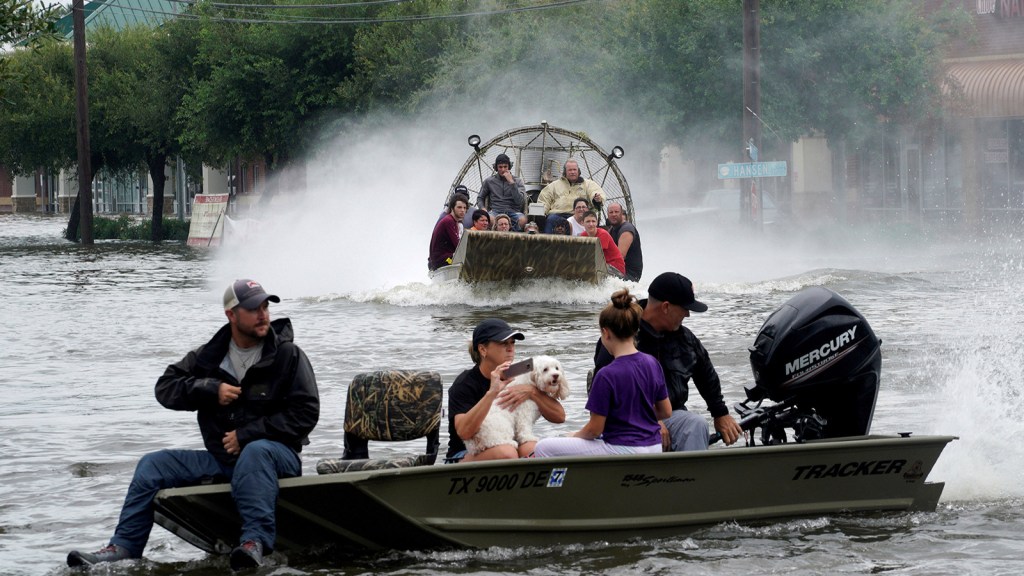 Sitting in my Seattle office, I’m 2,300 miles away from rising flood waters brought on by monster storm Harvey. But my heart is with my home state of Texas.

I’m glued to Facebook Live as friend after friend broadcasts their dire situation on the Gulf Coast to the world. One former coworker walks down the road in front of her home, water up to her waist and an old VW bus sitting partially submerged in the driveway. “We’re trying to fix it up,” she explains. “But we just haven’t had a chance to.”

A college acquaintance goes live from her Houston neighborhood in knee-deep water; a helicopter hovers to move an elderly neighbor from her flooding home. I text and call my family frantically to ask: Is there water in the house? Not yet, they say. Our house sits on eight-foot stilts, but the water is only inches away from getting inside. That’s never happened before.

As I spend several days staring at the devastation, want to know the one thing furthest from my mind right now? Climate change. And that’s pretty strange for a guy who spends his days running social media for an environmental news website.

Harvey is officially the most extreme rain event in U.S. history, dumping up to 50 inches on parts of Houston and the surrounding areas. FEMA has pledged to be in the region for not months, but years. “Unprecedented” doesn’t even begin to describe the destruction. And with unprecedented weather, comes climate talk — and the usual spats over bringing it up.

It’s predictable. Both sides of our extremely divided country will find time to bicker, but they mostly play to their respective audiences. We’re stuck in a social media feedback loop that serves no one — especially those stranded on their roofs waiting for rescue.

Right-wing media foams at the mouth to call out people for “blaming” Hurricane Harvey on climate change. Breitbart, the Daily Caller, Gateway Pundit, Newsbusters have all published articles critical of the climate link. False accusations are flying, intertwined with junk science and snark aimed at “liberals” who tie the larger story of climate change to Hurricane Harvey.

Heck, even President Trump’s EPA is criticizing scientists who link the storm to climate change.

And then there are the Trump-weary folks who feel a little glee at devastation in a red state. A University of Tampa professor was fired after public backlash over a tweet that suggested Harvey hit Texas as “instant Karma” for the state’s GOP DNA. Like clockwork, right-wing media swooped in.

There’s a narrative from conservative media that progressives don’t care about the people of Texas suffering right now, only making a political point. Insensitive comments and well-intentioned think pieces that leave out the effected people only feed into this sentiment. Of course, not everyone in Texas is conservative — Houston is one of the most diverse places in the United States. But given the state’s right-wing zeal, progressives have their work cut out for them when it comes to winning the hearts of the “nation’s bellwether.”

Right about now, you might be wondering if I believe both sides have valid arguments. I don’t. Scientists and progressives have the research and facts to back them up. The links are present and documented. Sea surface temperatures have steadily increased in the region and atmospheric moisture content helped create a stronger, wetter storm that moved slowly because of the lack of prevailing winds. These were the perfect conditions to create the worst hurricane in recent memory.

But there are risks involved with serving up climate talk without nuance or compassion during a natural disaster. To an audience that already distrusts mainstream, well, anything, you can easily come across as callous and uncaring toward victims of the storm.

“This is science!” you are yelling to yourself right now. I know, I know.

“We’re trying to warn people that their actions are changing the climate and increasing the strength of weather events. We aren’t uncaring! We care so much!”

Believe me, I get it.

Having grown up in the rural community of Danbury, Texas, about an hour’s drive south of Houston, I am without a doubt Born on the Bayou — as the Creedence Clearwater Revival song goes. But I’m also someone who cares deeply about our changing climate.

And talking about it with an unreceptive audience is notoriously tough. Research has shown that simply reciting facts won’t sway anyone who doesn’t already believe humans are fueling climate change. We also know that there is a “hope gap” when we talk about the devastation of climate change without giving people tangible solutions.

As climate scientist Katharine Hayhoe explains in the video above, information about climate change can sway minds if it is tied to something people already care about. She suggests starting conversations about climate over a genuinely shared interest or value with whomever you are talking to — from hunting and fishing to being a parent or sharing the same faith.

I tried to talk with climate scientist Michael Mann about this topic last weekend over Twitter, and I got blocked. Looking back, I don’t blame him. Twitter is not the best place for a nuanced conversation, and only so much can be said in 140-characters. But here’s what I would have said to him had communication not broken down so quickly: Let’s lead with compassion.

Yes, we should be having the conversation about climate change and Hurricane Harvey, and anyone who tells you otherwise probably has ulterior motives. But before we go there, we need to show the people of the Gulf Coast that we genuinely care about them. Could our shared value be the lives of Texans who are hurting?

As David Roberts of Vox (and formerly Grist) expertly laid out, although it’s irresponsible not to mention climate change, it’s not the most important point right now.

“The story that most matters about Harvey right now is the effect it’s having on lives and land in Texas and the efforts underway to prevent more suffering,” he writes. I couldn’t agree more.

If you truly care about mitigating climate change, playing “I told you so” while people are dying and losing their homes isn’t the way to do it. That approach only plays into right-wing talking points.

Texans are strong and loyal people. Show them you care and even the climate deniers among them just might surprise you. I called up a Trump-voting family member on the phone over the weekend to check on her. I asked how she was and whether she needed any supplies or help. We usually avoid talking about climate change, so I was surprised when, 30 minutes into the conversation, she mentioned “those 500-year storms sure are coming around very often. Something isn’t right.”

I saw my opportunity, and I took it. “Well, I think it could have a lot to do with climate change …” She sighed and we carefully waded into a conversation about the water and what comes next.