This new bike bottle fills itself with water 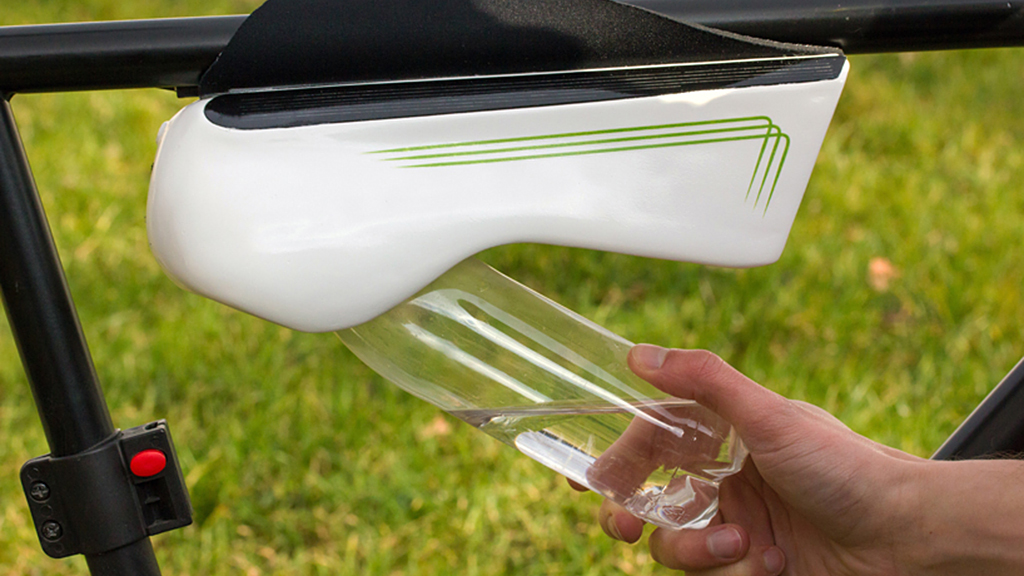 Designboom
All the humidity that's fit to drink

This new bike bottle fills itself with water

It took Austrian designer Kristof Retezár more than 30 different trials in his bathroom, where he tinkered with temperature and humidity to mimic different climates, before he perfected his newest creation — a self-filling water bottle that could be a game-changer for bikers and water-scarce countries alike.

Christened the “Fontus,” Retezár’s solar-powered water bottle is meant to attach to a bike frame. Depending on how hot and humid conditions are, it can generate up to 17 ounces of water by absorbing humid air as it passes over a two-piece mechanism that converts it into cool, drinkable water. Right now it’s also competing for a James Dyson Award, the Academy Awards for design engineering.

It works a little bit like this, CityLab reports:

When a cycle is in motion, air is funneled into the top holster and distributed over a “condensing structure.” A solar-powered cooling element then turns it into moisture that drips down a pipe into a detachable water bottle. (Any kind of half-liter PET bottle will work.)

At first glance, the Fontus is perfect for lengthy bike tours; it eliminates the need for pit-stops or finding safe freshwater to drink throughout the journey. But for the billions of people who live in hotter, more humid countries afflicted by severe drought or water scarcity, this water bottle could be a real lifesaver.

In less than 20 years, some scientists predict that almost half of the world’s population could be living under “severe water stress” — a scary thought, given that we’re already seeing black markets and water wars springing up in states plagued by severe drought, like California.

Humidity has never felt so good.