Four million children develop asthma every year as a result of air pollution from cars and trucks, equivalent to 11,000 new cases a day, a landmark study has found.

Most of the new cases occur in places where pollution levels are already below the World Health Organization limit, suggesting toxic air is even more harmful than thought. 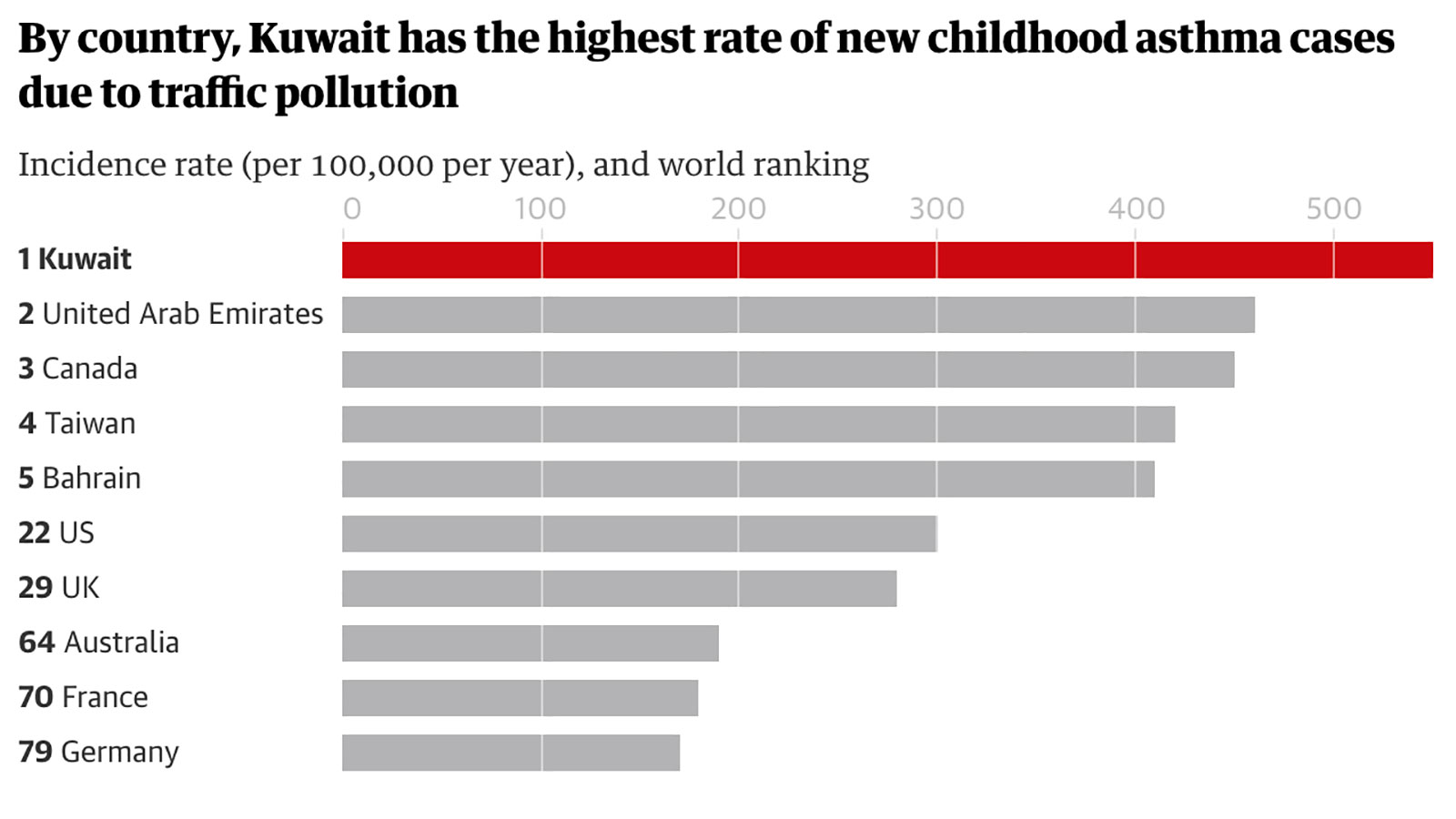 The damage to children’s health is not limited to China and India, where pollution levels are particularly high. In U.K. and U.S. cities, the researchers blame traffic pollution for a quarter of all new childhood asthma cases.

Canada has the third highest rate of new traffic-related asthma cases among the 194 nations analyzed, while Los Angeles and New York City are in the top 10 worst cities out of the 125 assessed. Children are especially vulnerable to toxic air and exposure is also known to leave them with stunted lungs.

The research, published in the journal Lancet Planetary Health, is the first global assessment of the impact of traffic fumes on childhood asthma based on high-resolution pollution data.

“Our findings suggest that millions of new cases of pediatric asthma could be prevented by reducing air pollution,” said Susan Anenberg, a professor at George Washington University. Asthma can cause deadly seizures.

The key pollutant, nitrogen dioxide, is produced largely by diesel vehicles, many of which emit far more than allowed on the road even after the Dieselgate scandal. “Improving access to cleaner forms of transport, like electrified public transport, cycling and walking, would reduce asthma, enhance physical fitness, and cut greenhouse gas emissions,” said Anenberg.

“This landmark study shows the massive global burden of asthma in children caused by traffic pollution,” said Chris Griffiths, professor at Queen Mary University of London and the co-director of the Asthma U.K. Center for Applied Research, who was not part of the research team. “Asthma is only one of the multiple adverse effects of pollution on children’s health. Governments must act now to protect children.” 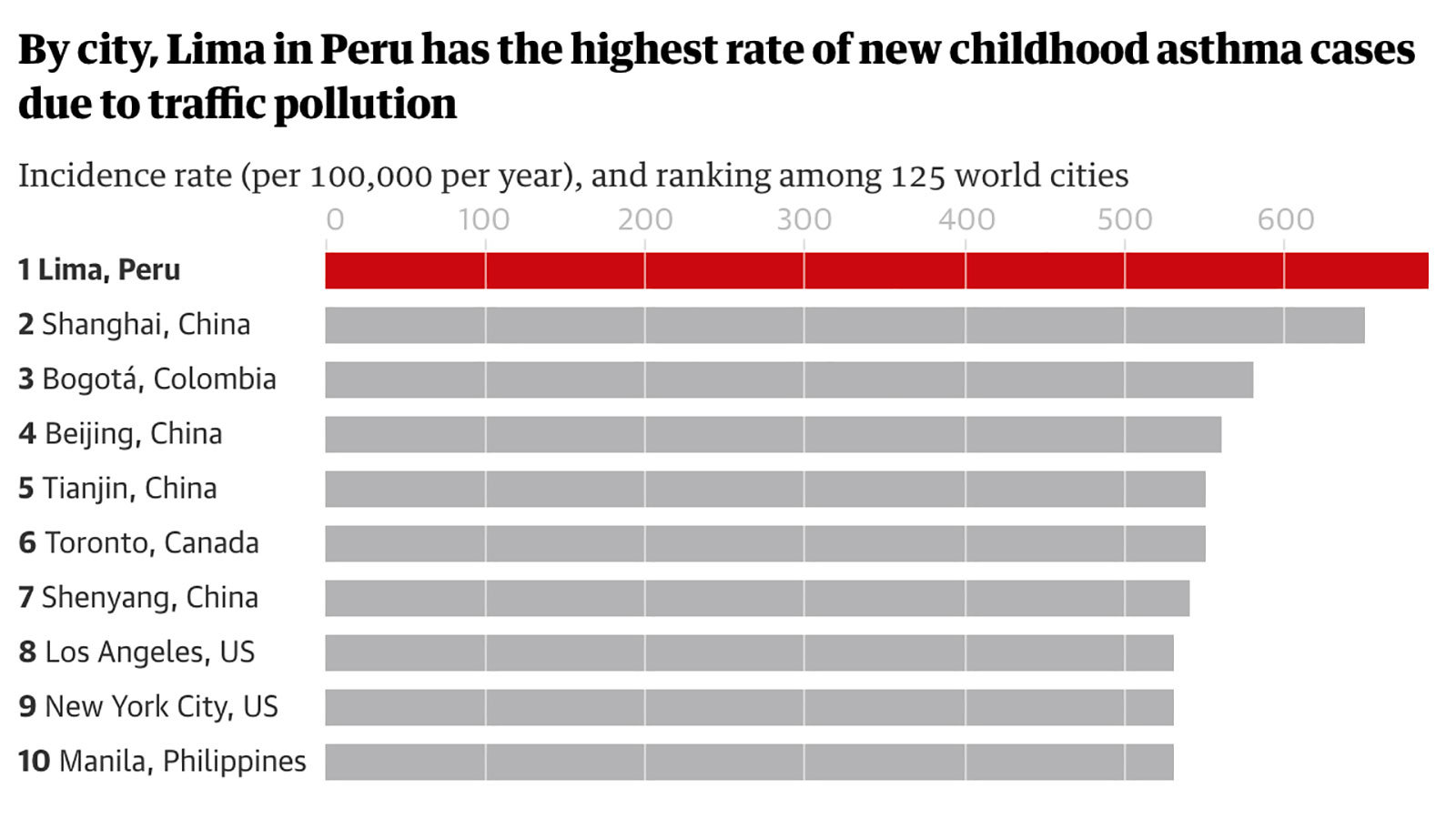 The new study combined detailed NO2 pollution data with asthma incidence rates and population numbers. Many large studies have already shown a strong link between traffic pollution and childhood asthma and that pollution causes damaging inflammation. This data on risks was used to calculate the number of new cases around the world.

The epidemiological evidence for NO2 being the key pollutant is the strongest. However, researchers cannot rule out that other pollutants also pumped out by vehicles, such as tiny particles, are also a factor as it is not possible to experiment directly on people.

“Childhood asthma has reached global epidemic proportions,” said Rajen Naidoo, professor at the University of KwaZulu-Natal in South Africa, and not involved in the study. It indicates that 1 in 8 of all new cases is due to traffic pollution. “An important outcome from this study is the evidence that the existing WHO standards are not protective against childhood asthma.”

The country with the highest national rate of childhood asthma attributed to traffic pollution is South Korea, with almost a third of all new cases blamed on vehicles. Japan and Belgium are in the top 10, along with six Middle Eastern nations, including Saudi Arabia.

Due to their high populations and pollution levels, the top three countries for the total number of new children getting asthma each year are China (760,000), India (350,000), and the U.S. (240,000). The scientists said their research may underestimate the true levels in many poorer nations where asthma often goes undiagnosed.

“While it is important for parents to try to reduce individual exposure, maybe by avoiding highly congested roads as much as possible, not everyone can do this,” said Achakulwisut. “So it is important to call for policy initiatives to tackle pollution at city, state and national levels.”

“The good news is that a transition to zero-emission vehicles is already underway,” she said. Some countries and cities are pledging to phase out internal combustion engines and policies such as London’s new ultra-low emission zone are being rolled out. “But this transition needs to become global, and it needs to happen faster. Each year of delay jeopardizes the health of millions of children worldwide.”

Penny Woods, chief executive of the British Lung Foundation, said: “We used to think the only real danger roads posed to children was the threat of a car accident. However, now we can see there’s an equally deadly risk: breathing in air pollution. Rightly, there’s been a huge effort to reduce road accidents and we need to see an equal commitment to reducing toxic air.”