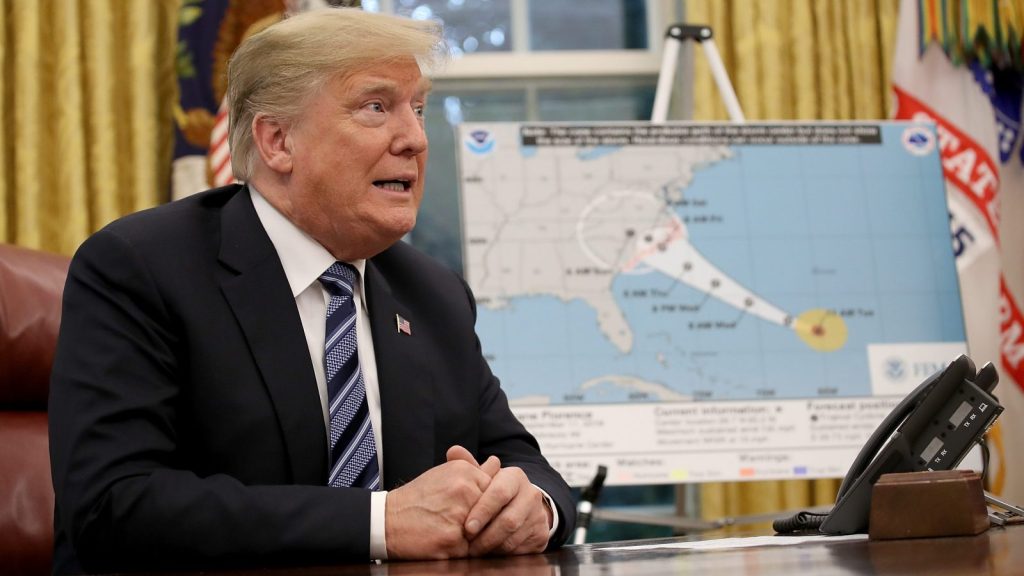 With Hurricane Florence set to pummel the East Coast, President Donald Trump took to Twitter on Wednesday to brag about his administration’s widely criticized response to last year’s Hurricane Maria, which devastated Puerto Rico. Trump’s comments drew outrage, with critics pointing out that Maria led to the deaths of nearly 3,000 people. But Trump hasn’t been able to let the matter go. On Thursday, Trump insisted in a pair of tweets that the official death toll was concocted by “Democrats” as part of a conspiracy to “make me look as bad as possible.”

3000 people did not die in the two hurricanes that hit Puerto Rico. When I left the Island, AFTER the storm had hit, they had anywhere from 6 to 18 deaths. As time went by it did not go up by much. Then, a long time later, they started to report really large numbers, like 3000…

…..This was done by the Democrats in order to make me look as bad as possible when I was successfully raising Billions of Dollars to help rebuild Puerto Rico. If a person died for any reason, like old age, just add them onto the list. Bad politics. I love Puerto Rico!

In fact, the Puerto Rico numbers were collected over months by researchers at George Washington University’s school of public health, at the request of the territory’s governor. As the New York Times explained in August:

At issue has been how to assess the severity of a storm whose devastating impact on fundamental needs — water, electricity, communications, and medical care — seemed to rival or exceed that of the deadliest recent storms to hit the United States, but whose official fatality count until now was far less severe. By comparison, Hurricane Katrina, which struck the Gulf Coast in 2005, is thought to have killed anywhere from 1,000 to more than 1,800 people.

The government’s latest revision brings to a close a year of debate and scientific scrutiny over fatality estimates that had seemed to vary widely — in some cases by thousands. Governor Ricardo Rosselló faced constant political challenges over the disparity between the official death toll, released within weeks of the disaster, and what was apparent to most scientific researchers and reporters who investigated deaths. The inability to provide a reliable death count seemed, to many critics, to echo the dysfunction apparent in the island’s lack of preparation or any swift, effective response from the local and federal governments.

The report came nearly a year after a much-maligned visit to Puerto Rico by Trump two weeks after Maria, where he implied that residents should be “proud” that the official death toll at the time was just 16 people, far lower than that of a “real catastrophe, like Katrina.” That statement ignored the difficulty of counting deaths after the hurricane decimated the island’s infrastructure. In fact, by the time Trump got on his plane to return to Washington, that official death toll had already doubled.