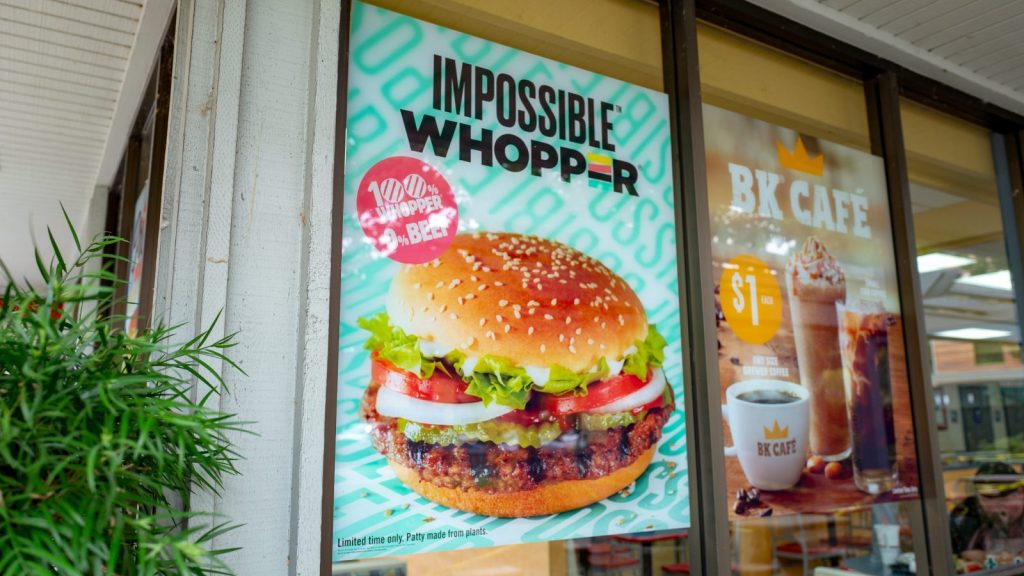 Hamburger-chomping Americans have proven to be stubborn defenders of their meaty diets. But there’s evidence their defenses are starting to crack. A full 95 percent of Americans who ordered veggie burgers at fast-food restaurants also bought a beef burger in the last year, according to a new report from the marketing research company NDP Group. So either meat-eaters are taking an interest in the variety of fake meat appearing on fast-food menus, or maybe vegetarians aren’t super strict about their diets (hey, no judgment!).

Fast-food mainstays like Burger King and White Castle as well as chains like Red Robin have recently started offering burgers and sliders with patties made from soy protein and coconut oil disguised as meat meat — Impossible Burgers. Meanwhile, Carl’s Jr and Del Taco are offering competing Beyond Meat products, made out of pea protein. And of course, many places still offer the old garden-variety garden burger.

Sales of such plant-based proteins grew 10 percent in the last year, while the conventional meat industry grew just 2 percent, according to a new report from the Good Food Institute, a nonprofit think tank that promotes meatless alternatives.

Not all fast-food companies are on board. Some are pushing in the opposite direction. Arby’s, the folks who brought us those thunderous “We have the meats” ads, announced earlier this year that it would never add veggie meats to its menu. It’s even developing a weird line of products called Megetables™– basically, meat dressed up as vegetables, like the “marrot,” carrot-shaped turkey meat. Sadly for lovers of floppy, fleshy carrots everywhere, this product isn’t yet available — the chain says it’s “in the early stages of exploring the Megetables concept.”

For its part, the conventional meat industry has been trying to tweak the rules around marketing plant-based alternatives. Several states, including Missouri, Lousiana, and Mississippi, have passed so-called “Truth in Labeling” laws, which would prevent the new crop of foods from being labeled with words like “burger” or “sausage.” Ostensibly, this is because shoppers might be mixing up veggie meat and meat meat. And that’s less far-fetched than it used to sound.

Plant-based meats are becoming so close in flavor and texture to the real thing that some Burger Kings in Sweden are submitting its customers to a taste test. If you order a Whopper or chicken burger from the chain’s new “50/50 menu,” you could get the original … or a meatless alternative. About 60 percent of costumers have guessed what they ate correctly, a handy measure of food engineers’ success.

Since conventionally raised beef is one of the most carbon-intensive foods you can eat, it’s good news for the climate that people are beginning to mix things up when it comes to their burger habit. And if Americans can be convinced to buy fake meat burgers, what’s next? For Impossible Foods, the answer is Asia, where nearly half of the world’s meat is eaten.