Most Republicans once liked the Green New Deal. And no, you’re not reading climate fiction. This was reality just a year ago.

Some 64 percent of Republican voters initially supported the package of climate and green jobs policies, according to a poll from the Yale Program on Climate Change Communication. This was in December of last year, when those polled weren’t familiar with the name “Green New Deal.” Some 82 percent of them hadn’t even heard the phrase, let alone any nonsense about banning hamburgers. (For the record, that’s not part of the resolution introduced in Congress.)

Bipartisan support for the policy was short-lived, thanks in large part to a TV network that rhymes with “Lox Blues.” A new study published in Nature Climate Change found that the more Republicans heard about the Green New Deal, the less they liked it. Among those who watched Fox News more than once a week, support for the GND plunged from 54 percent in early December to 22 percent by early April. In other words, the majority of Republican voters supported what was in the package then changed their minds once they heard Fox’s talking heads seize on the ambitious scope of the program and trash it. On Tucker Carlson’s show, it was rebranded as the Green New Mess, as well as an excuse to usher in socialism. 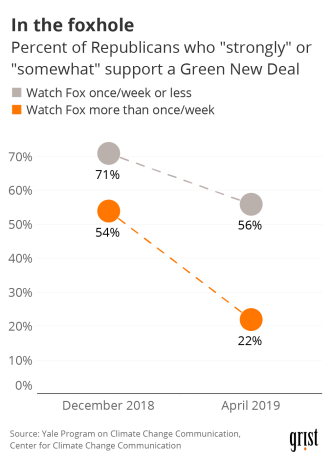 The resolution was introduced by Representative Alexandria Ocasio-Cortez from New York City and Senator Ed Markey from Massachusetts in February, then shot down by the Senate in March. After its introduction in Congress, the Green New Deal was covered by Fox more frequently than other networks, and some of that coverage included straight-up lies. Analysis from media watchdog Media Matters found that more than half of Fox’s segments on the Green New Deal in mid-February didn’t even bring up climate change. Most of the discussion centered on political wins or losses rather than on how the resolution might work or what problems it would address.

By April, only 4 percent of Republicans who had heard a lot about the resolution backed it, compared to 96 percent of Democrats. Fast forward to now, and it’s hard to believe that the idea — and before that, the political will to take on climate change more generally — ever had bipartisan support.

The environment wasn’t always so polarizing. President Richard Nixon established the Environmental Protection Agency in 1970, after all. But over recent decades, Republicans and Democrats have been driven further and further apart from each other on not just political opinions but on basic facts. That’s the case with climate change along with immigration, gun laws, and other issues. The so-called “Fox News effect” is a part of that story.

The good news? Younger Republicans now sound nearly identical to Democrats when it comes to a federal carbon tax, further restrictions on methane emissions, and a national renewable energy standard, according to a recent survey from Ipsos and Newsy. (Label them as part of the Green New Deal and results may vary.) The surge of environmental concern among young conservatives could bring big changes to the GOP in the years ahead.