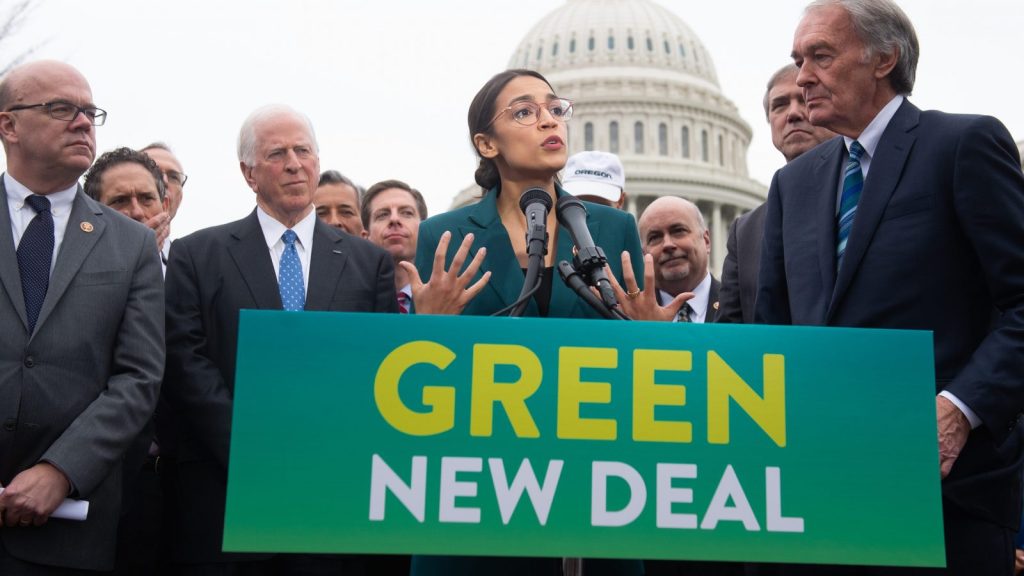 Climate change coverage in much of the mainstream media was abysmally low in 2018. It’s been tilting upward in the first quarter of 2019, thanks in large part to the Green New Deal. The ascending trend is a positive development overall — it’s about time media started paying more attention to the existential crisis of our time! — and yet some of the coverage has been weak, and some has been a total mess.

Climate coverage in 2018 plunged 45 percent from 2017 levels on the national broadcast TV networks, we at Media Matters found — and it’s not like coverage in 2017 was anything to brag about. In 2018, the major nightly news and Sunday morning political shows on the national broadcast networks spent a combined total of just 142 minutes on climate change, and almost a third of that came from a single climate-focused episode of Meet the Press on December 30.

Without that one show, 2018’s coverage would have fallen 64 percent from the previous year — an astonishing decline when you consider the horrific extreme weather last year, the harrowing climate science reports released by the United Nations and 13 U.S. government agencies, the Trump administration’s ongoing assault on climate protections, and the ever-increasing urgency of the climate crisis.

Analyses of other media trends in 2018 also pinpointed shortcomings. The watchdog group Public Citizen examined coverage of extreme weather events in a number of U.S. newspapers, online sources, and cable and broadcast TV networks last year and found that “the proportion of pieces that mentioned climate change was disappointingly low.” Just 7 percent of stories about hurricanes incorporated climate change, while the figures were higher for other kinds of weather disasters — but still not as high as we need them to be.

Many of the journalists who served as moderators in 2018 midterm election debates neglected climate change too (just as they had in 2016). Only 29 percent of key debates last year in competitive Senate and gubernatorial races included a question about climate change.

But the 2018 election ultimately triggered a change in climate coverage and in the broader national conversation about the need for climate action — because it brought us AOC.

Hey, look: The media is paying a little more attention to climate change this year

President Donald Trump drove climate coverage (or the lack of it, rather) in the last couple of years, but so far in 2019, Representative Alexandria Ocasio-Cortez, a Democrat from New York, has taken over the driver’s seat.

When she and Senator Ed Markey, a Democrat from Massachusetts, introduced their Green New Deal resolution on February 7, they kicked off a firestorm of climate coverage. Whether you love the Green New Deal, hate it, or want to quibble over its specifics, you can’t deny that it’s spurring more discussion of climate policy than the U.S. has ever seen.

The Green New Deal inspired the Washington Post to dedicate five consecutive days of editorials to substantive discussion of a comprehensive climate plan (handily compiled into one online piece). It got the major Sunday morning political shows talking about climate change with more fervor than they did during most of last year. It prompted an unusual amount of prime-time cable climate coverage. It sparked MSNBC’s Chris Hayes to host a special event with Ocasio-Cortez — after he said last year that climate coverage was a “palpable ratings killer.” And it propelled young Americans to march in the streets and confront their senators, thereby pushing their messages into the press.

The Green New Deal has even spurred a handful of Republican members of Congress to cough up some of their own milquetoast ideas for addressing aspects of the climate crisis — like Senator Lamar Alexander from Tennessee, who went on NPR’s All Things Considered to tout his climate plan, and Representative Matt Gaetz from Florida, who gave an interview to Vice to promote his.

Presidential hopeful Jay Inslee, the Democratic governor of Washington state, is helping too by making climate change the central issue in his campaign and discussing it on ABC’s This Week, CNN’s State of the Nation, and even Fox & Friends, Trump’s favorite show. The other Democratic presidential candidates are also talking about climate change and the Green New Deal.

So the quantity of coverage is up, but how about the quality?

Some of the climate coverage we’ve seen so far this year been informative and constructive. See: the Washington Post’s editorial series and Chris Hayes’ AOC special. Some of it has been superficial. See: TV talking heads. And some of it has been a mess of lies, mockery, and fearmongering. See: Almost everything on Fox News.

When the major networks’ Sunday morning political shows discussed the Green New Deal the weekend after the resolution was unveiled, “most of the discussion was superficial and narrowly focused on whether the Green New Deal will cause intra-party fighting among Democrats or end up benefiting Republicans, not on whether its policy ideas are good approaches for fighting climate change,” as Media Matters’ Evlondo Cooper pointed out.

Carlos Maza at Vox looked at a broader selection of TV coverage and found the same thing, as he described in a video:

I have watched hours of segments about the Green New Deal and none of them actually explained how it might work. Instead, they focus on the politics. Is it gonna pass? Does Pelosi like it? What did Trump tweet about it? Everything except: Is it a good idea?

This kind of narrow, horse race-style coverage of policy proposals is one of the climate-coverage pitfalls we need to be on the watch for in 2019.

Another problem is that some coverage of the Green New Deal doesn’t even mention climate change. More than half of Fox News’ segments on the plan in the days after it was released didn’t include any discussion of climate change. Fox personalities and guests often talked about the proposal as though it were a pointless scheme to oppress the masses, not a plan to address a major looming threat. CNN and MSNBC weren’t nearly that bad, of course, but they also ran segments that failed to bring up climate change and often discussed the Green New Deal as a political football.

One of the biggest problems with coverage of the Green New Deal is that there’s a lot more of it on Fox and other right-wing outlets than on mainstream and left-leaning outlets — and in many cases, Fox and its ilk are straight–up lying. Fox aired more than three times as many segments about the Green New Deal from February 7 to 11 as did CNN and MSNBC combined. With their heavy coverage and repetition of misinformation — like completely bogus claims about sky-high costs — right-wing media are distorting the national dialogue just as it’s getting going.

Sean McElwee of the progressive think tank Data for Progress explained how this is playing out in a recent New York Times op-ed:

According to data shared with The Times from Navigator, a progressive polling project, 37 percent of Republican viewers of Fox News had heard “a lot” about the Green New Deal, compared with 14 percent of all registered voters.

He concludes that “the Republican propaganda machine has already reshaped the narrative.”

We don’t expect Fox to improve (some news outlets are beyond redemption), but mainstream and progressive news organizations can do better. They need to cover the Green New Deal and climate change more often, to provide a counterweight to the bunk coming from the right. And they should cover it not as a political story (who “won” the day when Mitch McConnell held a stunt vote on the Green New Deal?), but with substantive reporting and discussion about how to implement climate policies that are fair, effective, and commensurate with the enormous size of the problem.