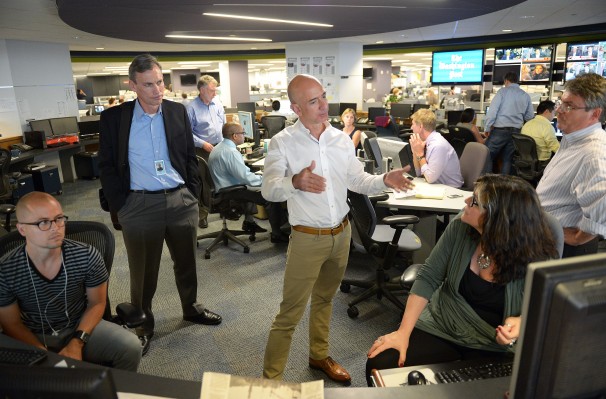 The Volokh Conspiracy, a blog of climate conspiracy theorists, is now part of the Washington Post.

When Amazon CEO Jeff Bezos took over the Post, some climate activists hoped he would close down the Post’s editorial support for climate-science deniers such as George Will and strengthen the influential paper’s focus on the climate threat.

But it was not to be.

The Volokh Conspiracy bloggers are aptly named, as many of them have promoted conspiracy theories about anthropogenic climate change and the scientists who study it.

“As these stories make clear, several of the scientists whose e-mail and other documents were disclosed engaged in both unethical and illegal conduct.”

“JunkScience.com, run by the Cato Institute’s prolific Steven Milloy, is a year-round antidote to the unscientific panics incited by big government and the scientists who love it.”

“Whatever the exact state of climate science, the marriage of the authority of science and the authority of the United Nations plainly corrupted a non-negligible number of the climate scientists. Not, let us be clear, that it took very much to sway scientists who were offered what appeared to them to direct global economic policy and win Nobel prizes.”

“All of their examples of people supposedly ‘reinventing’ the climate change debate were people who were convinced that we needed to do something now to stop or reverse global warming, which is pretty much what that side of the debate has wanted all along. . . . We may well be causing climate change, but it’s not clear there’s anything we as individuals or we as a country are really equipped to do about it.”

“Hoffer is correct that we now have enough data to know that most prior climate models are wrong.”

“Remember, people are usually at least somewhat circumspect in writing emails to professional colleagues around the world. Thus, is it likely that the corruption in this subfield of climatology is LESS serious or MORE serious than the scientists would disclose to their colleagues in their own emails?”

“While the wider world is just beginning to realize that the subfield of paleoclimatology is in shambles (and has been for the last decade), scientists in related disciplines are increasingly fighting back against the shoddy work and orthodoxy that was foisted on them.”

“The other moment in the debate that struck me as quite strange was Biden’s comment that he is certain that all global warming is manmade and that manmade global warming is what is melting the polar icecap . . .

Palin’s answer was much more nuanced and consistent with science (not to mention being absolutely correct about what to do it about it as a policy matter, focus on the impacts and the mix of policies to respond to climate change) . . .

It is obvious that there are cyclical temperature changes on the planet (in addition to other natural variances, such as sun spots, cloud cover, etc.). We have had ice ages and tropicl [sic] periods. I have tried to find some nuance or qualification in Biden’s statement that he understands the difference between ‘all’ and ‘most’ or the possible role of natural causes, but I don’t see it. He seems to just be wrong about his understanding of what the science actually says on this point.”

It’s really hard to imagine how Bezos thinks this kind of conspiratorial, anti-science blather will help the Washington Post.