We fixed the ozone layer (sort of). Can we fix the climate? 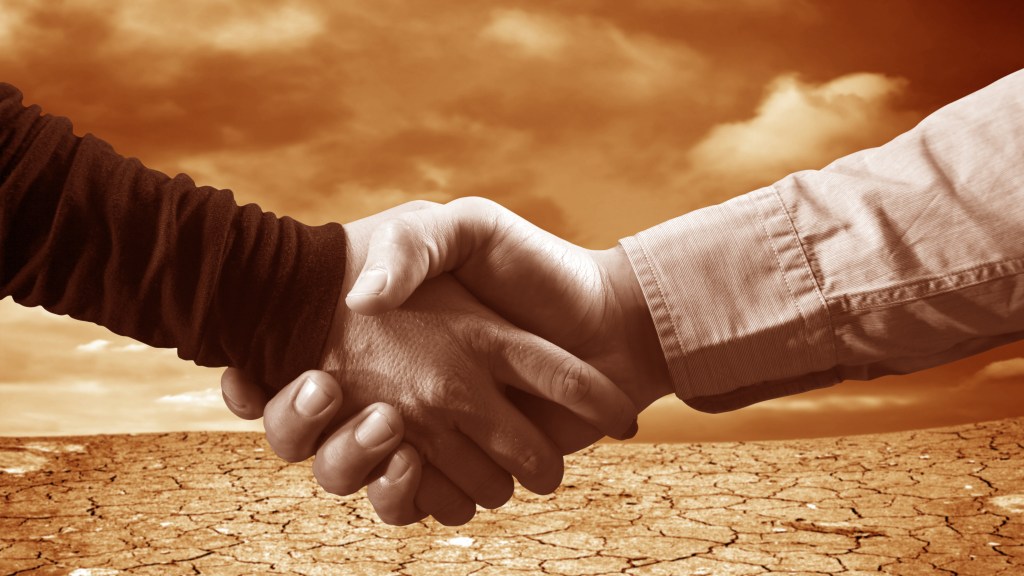 We fixed the ozone layer (sort of). Can we fix the climate?

So 300 scientists working for the United Nations Environment Program are claiming that the ozone — that blanket of O3 in the stratosphere — is back on track to keep nasty ultraviolet radiation at bay for generations to come. Everyone’s rightly giving all the credit to the Montreal Protocol, an international agreement created in the 1980s to produce and consume fewer ozone-depleting substances.

For the moment, let’s ignore how dubious the optimism of the recent U.N. report is. This is big news: an example of international action to resolve a global atmospheric problem that really works!

George Monbiot makes the easy connection in The Guardian, arguing that governments need to collaborate on climate change the same way. He’s not the first one to ask what the ozone-protecting treaty means for global climate agreements; the question has been posed seemingly every time world leaders get together.

But Monbiot is realistic about the state of the world, admitting that such purposeful international action isn’t possible nowadays due to the extreme market fundamentalism that dominates politics today. This doctrine does not allow governments to intervene with big corporate profits, even to save the climatic conditions that allow the survival of humans (and big corporate profits, for that matter).

When the Montreal Protocol was written, this neoliberal agenda was just beginning to infiltrate the political world. As for the improbability of re-creating such cooperation now, Monbiot smartly speculates:

[W]ere the ozone hole to have been discovered today, governments would have announced talks about talks about talks, and we would still be discussing whether something should be done as our skin turned to crackling.

The differences between addressing global warming and the ozone holes go beyond political conditions and ideologies, though. Solving the ozone problem meant agreeing to stop using a few ozone-depleting chemicals, and replace them with some differently harmful alternative chemicals. To stop disrupting the climate, nations will have to all agree to remake our energy systems, redesign our economies, stand up to powerful corporate interests, and get over the weird fetish for growth and more.

That’s not all. Making all these changes will inevitably mean those who have the most power in today’s world will be less powerful in the climate-stable future world — yes, that’s you, America. If transforming the world as we know it doesn’t sound difficult enough to you, remember that the nation-states and mega-corporations with the most power have decision-making bodies by the balls.

Speaking of world power structures, the simple fact that there’s no longer one big, scary global hegemon has slowed climate talks, according to Hannes Stephan of the University of Stirling. Mat Hope of The Carbon Brief reports:

The Montreal protocol was agreed at a time when the US was considered to be the world’s dominant superpower. That allowed the US … to cajole other countries into taking action, Stephan says.

This is no longer the case. In the international climate negotiations there are at least four major players that don’t see eye to eye: the US, China, India and the EU.

To further complicate matters, Hope also points out that ozone science is easier than climate science:

In CFCs case, it was clear their use was creating a hole in the atmosphere and scientists could present this in a simple, startling way … [b]ut when it comes to climate change, the impacts are more complex. Greenhouse gas emissions cause multiple impacts across the world at different times. It’s an environmental challenge that encompasses the whole planet.

Holes in the ozone layer mean our skin burns to a crisp right now and then we get cancer later on. Even though the age of climate consequences has clearly arrived, the most extreme repercussions of global warming are in the future. (And the worst effects will always lie ahead of us while we keep increasing emissions. Think about it.) “Now” and “cancer” hit harder than “weather events” and “the future.”

I’ll add one more possible explanation for our failure to address climate change, even while we apparently fixed the ozone hole. The most visible effect of ozone depletion is skin cancer, a disease that preys predominantly on the epidermises of white people. Climate change, on the other hand, promises to ravage the whole world, disproportionately affecting those who have emitted the least, can least afford to escape or alleviate the damage, and, crucially, have the least political power to demand global action.

Is it really surprising that the powers-that-be reacted swiftly and decisively to an environmental issue that threatens their own? Or that now they’re hemming and hawing at an impending doomsday that they can’t avert without giving up some of their power?

To sum up, even if we pretend that the ozone layer really is recovering smoothly thanks to the great success of a global treaty (an iffy conclusion at best), extending this method of success to the wicked problem that is climate change lies a few more leaps and bounds away. That Kyoto thing sure didn’t work.