Remember when climate change hit the runway at New York Fashion Week? Luka Sabbat’s apocalypse-ready collection was, for better or worse, just the beginning of this year’s trend in climate a-wear-ness (see what I did there?).

This time around, the fashion influencer is a climate scientist. Ed Hawkins, a professor at the University of Reading, set out to design an easy-to-grasp, easy-to-replicate visual of our planet’s warming temperatures over the past century. The result: these stripes, each one representing the average global temperature for a single year. As the years march on, the bands of color shift from blue (colder years) to red (hotter years).

The design is now available in the form of flip-flops, leggings, tote bags, and other merchandise from Zazzle, an artsy online marketplace. 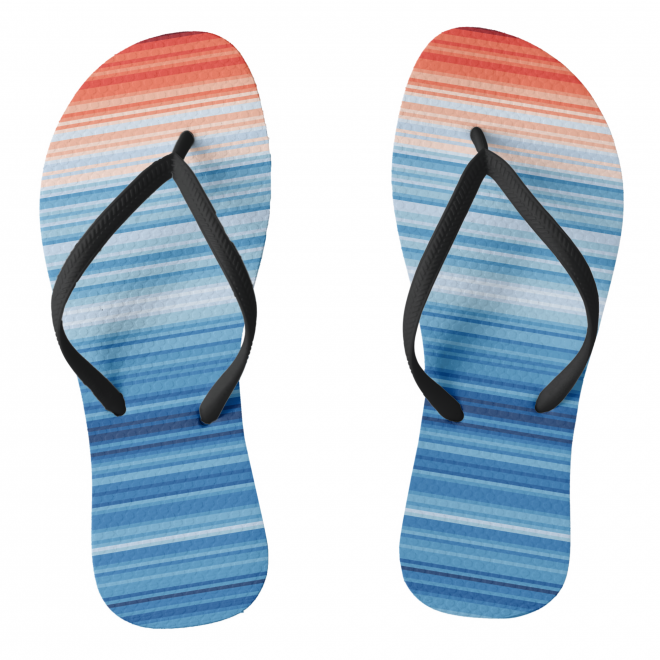 Of course, climate change and fashion have a flawed relationship, to say the least. The environmental toll of the fashion industry has been well documented — it takes about 200 tons of water to produce one ton of fabric, and the carbon emissions are off the charts — whereas the impact of spreading awareness through green garb remains largely theoretical.

“There seems to be a certain irony in putting these on cheap plastic footwear,” remarked one Twitter user who goes by the moniker “FitandFunemployed.” Besides, flip-flops hardly seem like the best way to spark conversations about climate change, since slipping on the shoes means hiding the stripe pattern with … your feet.

Hawkins, for his part, makes no pretense that flip-flops are going to save the planet (though they might just save our soles). “We have to find a very wide range of ways of communicating about this,” Hawkins told Vox. “This graphic is not the one answer.” Hawkins and his team also created this spiral animation in 2016, which was highlighted in the climate-themed opening ceremony of the Rio Olympics.

It’s an encouraging sign when we see climate-consciousness showing up in fashion and the arts (and maybe someday, every other field). Leggings manufacturers shouldn’t necessarily be excluded from that. But before you discard your Lululemons and rush to replace them with climate stripes, remember that buying less stuff is one of the cheapest, easiest lifestyle changes we can all make to combat climate change on an individual level.