What does it mean to take responsibility for our waste? 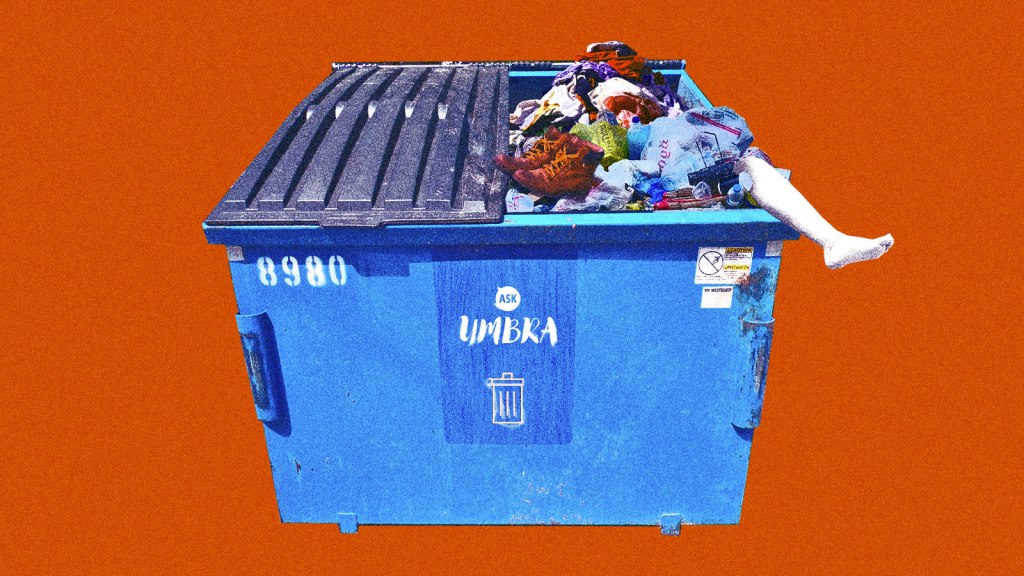 What does it mean to take responsibility for our waste?

Is there a way to take responsibility for all the garbage we produce? Food, clothes, packaging, the dead…

We have to distinguish among the categories you’re naming, I think. Disposing of a bubble mailer from Amazon is a very different process from burying a body, unless you’re Tony Soprano. That’s because humans tend to have deep emotional attachment to other humans, which is what separates us from robots and psychopaths, and we want to honor the people we love even as the bodies that housed them decompose. We build beautiful parks and monuments and even palaces to honor dead bodies! (Although those practices are changing, with growing consciousness of the environmental impact of conventional burials.)

But imagine if we did that for our trash! It would be insane. I’m not advocating for people to treat their garbage as they would their deceased loved ones — I don’t even like it when people refer to their pets as “children.” It feels disrespectful to human life, however you may feel about human life.

That said, there’s certainly a spectrum of consideration to be had for the things that leave our lives. It’s clear that entrusting disposal to external services — the Department of Public Works, for example — means that we don’t have to think about it that much. You toss a plastic wrapper in the container under your kitchen sink, and then you empty that container into a larger one on the sidewalk, and someone you’ll probably never meet comes and throws the contents of that container into a giant truck, and the truck carts it all off to a place you’ll probably never see.

This whole process is considered a triumph of modern civil engineering. Like sewer systems and municipal morgues, garbage collection has been instrumental in curbing early mortality, epidemics, and general human suffering.

But the out-of-sight nature of modern garbage collection has also made it the scapegoat of so many environmental gripings. In a wealthy, industrialized country, we rarely have to think about our waste, so we just don’t.

You say you want to “take responsibility.” That’s a fairly amorphous concept. Does it mean you pay some price for what you’ve thrown away? (You do already, when you pay for garbage disposal services either directly or through taxes.) You allow yourself to be publicly crucified on a stage constructed out of the contents of your recycling bin? You simply acknowledge your role in creating waste, pointing out with a tweet or an Instagram post that you played a part in the current global trash crisis? Or, do you personally take on the task of properly disassembling or disposing of all the waste you create?

The whole reason that municipal waste systems were put into place — as recently as 200 years ago, here in the United States — was because humans have historically been very careless about how they dispose of gross stuff. One particularly apt example, for our purposes, comes from the work of historian Joel Tarr. At the turn of the 20th century, garbage collectors had to contend with the scourge of horse carcasses that littered the streets, because horses were regularly used for transportation and hauling purposes and they’re, well, mortal creatures. And enormous dead mammals are very heavy and attract disease-vectoring insects, so they’re a pain to dispose of, to say the least.

So you can imagine that the advent of the automobile was considered a big step forward, in the context of waste management. However! That very innovation is in no small part responsible for the climate crisis we have today. We don’t have to step over horse parts in the street anymore, but we do have to contend with the fact that carbon emissions from automobiles are threatening the fabric of every ecosystem on Earth.

The difference between dead horses and carbon emissions, of course, is that a dead horse is extremely hard to ignore. It’s the conclusion of a very clear sequence of events: You have created waste, and here it is rotting horrifically in front of you. That “rotting horrifically” bit is one reason that I’m not particularly interested in going back to pre-modern-waste-services time, and I don’t think you are either.

But there’s something to be said for a trash crisis to snap people into reassessing their own role in it.

A micro-example: In February, Seattle had a huge snowstorm. The streets became sheets of ice, and trash collection was both literally and figuratively frozen. The dumpsters behind my apartment building overflowed into the parking lot, raccoons showed up and wreaked even more havoc (as they are wont to do!), and it was just really unpleasant. I started intentionally conserving my household trash so as to not add to the problem.

A macro-example: China’s big-deal rejection of a lot of American recyclables. Since a great deal of American municipalities spent years and years sending most of our trash overseas and calling it a day, we didn’t have to contend with the implications of said trash. Now we do. Last week, I received a mailing from the City of Seattle explaining how to deal with household recycling in detail, with the number one recommendation being reducing waste altogether.

To sum up: It’s hard to think about reducing one’s trash until it’s rotting on your doorstep. You could challenge yourself to not remove any trash from your house for three weeks — a completely arbitrary period of time that I made up, for what it’s worth — and see if that changes your habits. You might buy a household composter, because food is the part of garbage with the greatest penchant for rotting; better, you might petition your city council to institute municipal compost!

You might find that spending more time with your trash inspires you to produce less of it — by buying staples in bulk, patronizing vendors who reuse packaging instead of forcing you to dispose of it (like dairies that wash and recirculate glass milk bottles, or the new Loop Store that’s available in the mid-Atlantic), or just generally buying less stuff that you don’t really need. That especially applies to food, I think you’ll notice: Instead of grocery shopping for a worst-case zombie apocalypse scenario that never happens — and then tossing what you don’t use — I think everyone could benefit from buying supplies for just a few meals at a time.

I wish that I had a better answer for you than “force yourself to come face-to-face your own waste, and you will change your life.” But I think that’s what they say about death, too.