What HAS Leonardo DiCaprio done for climate change? Grist investigates. 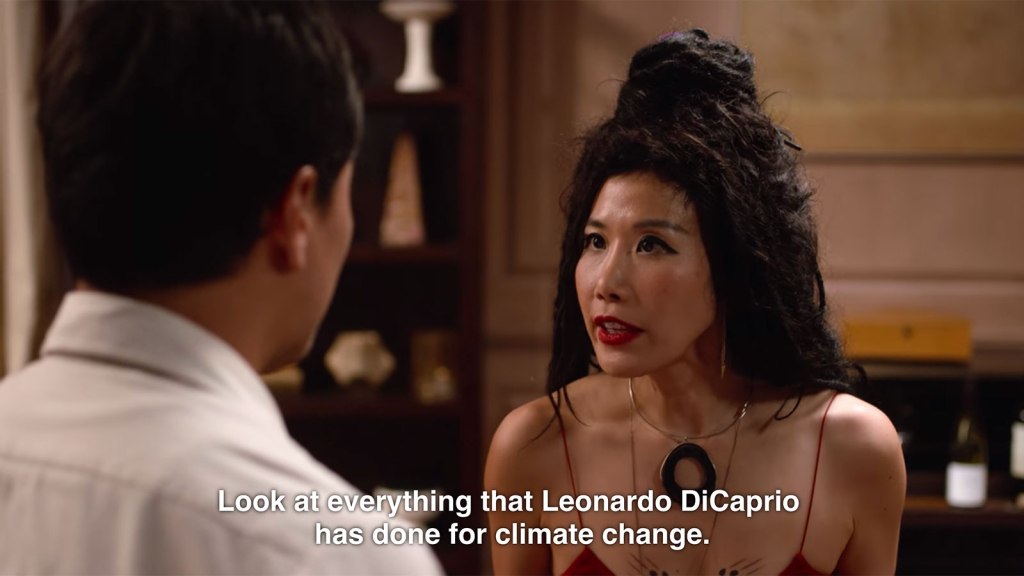 Netflix
ALWAYS BE MY MAYBE

What HAS Leonardo DiCaprio done for climate change? Grist investigates.

Instead of going out this weekend, I stayed in and watched Always Be My Maybe, the new Netflix romcom featuring stand-up comedian Ali Wong and actor Randall Park (I regret nothing, thanks for asking). The flick follows two childhood sweethearts who grow apart … until fate brings them back together. Will they end up living happily ever after? The movie answers that question but raises another: What has Leonardo DiCaprio done for the environment?

Allow me to explain. One of the funniest scenes takes place at Keanu Reeves’ house. Reeves, who plays himself, Marcus (Park), Sasha (Wong), and Marcus’ girlfriend, Jenny (played by Vivian Bang), are playing a game called IceBreaker. One thing leads to another and Reeves ends up smashing a glass vase over his own head and putting Park in a choke hold.

As Marcus prepares to leave, a little worse for wear, his girlfriend informs him she’s staying behind to talk to Reeves. “You can’t change the world without influential people,” she says. “Look at everything that Leonardo DiCaprio has done for climate change.” Irritated, Marcus asks, “What has he done for climate change?” “He’s working on it!” Jenny replies, exasperated.

But what has DiCaprio done for the environment? His environmental organization (named the Leonardo DiCaprio Foundation, in case there was any confusion about whose initiative it is) has been around since 1998. That’s 21 years! If we assume that Jenny’s hypothesis — that we can’t change the world without influential people — is true, then I want to see proof that DiCaprio has actually moved the needle somehow. This is a Grist investigation.

The Leonardo DiCaprio Foundation (LDF) has funded more than 200 projects since it was founded in 1998, awarding $100 million in grants to 132 organizations across 50 countries. That’s something, right? Probably! But you’ll have to take their word for it.

LDF is a donor-advised fund, a type of charity that’s increasingly popular with celebrities. A donor-advised fund means it allows the funder to make a contribution, get a tax deduction back immediately, and then make grant recommendations. People love these funds because they’re efficient, reduce overhead costs, and deliver a super-fast turnaround on those handy tax-deductions. But there’s a tradeoff.

Donor-advised funds aren’t required to file disclosures about how their money is spent. In 2016, a watchdog group called CharityWatch noted that LDF did not provide financial statement disclosures that would help outside groups determine how efficiently the group was raising and spending its money.

“In CharityWatch’s opinion, charitable funds like LDF that are soliciting the public for donations should not be permitted to be structured as [direct-action funds] since that allows them to avoid the financial and other transparency requirements that must be met by stand-alone charities,” the watchdog wrote.

But what about his movie? DiCaprio recently released a documentary in collaboration with National Geographic titled Before the Flood, in which the actor appears to play a newer, better-looking version of Al Gore circa An Inconvenient Truth — a lot of staring out of airplane windows and earnest pleas for change. The camera crew follows DiCaprio around as he flies to five continents and the Arctic to see the effects of climate change with his own eyes. Did the Wolf of Wall Street succeed in saving his brethren? Nope, as far as I can tell everything is still dying.

Look, it’s tempting to stand at the bow of the Titanic, lean into young Leo, and just trust that he’s going to save the elephants. But the planet is fucked six ways to Sunday. I want the goddamn receipts, Leo! Until then, my investigation ends on a solid: Maybe?