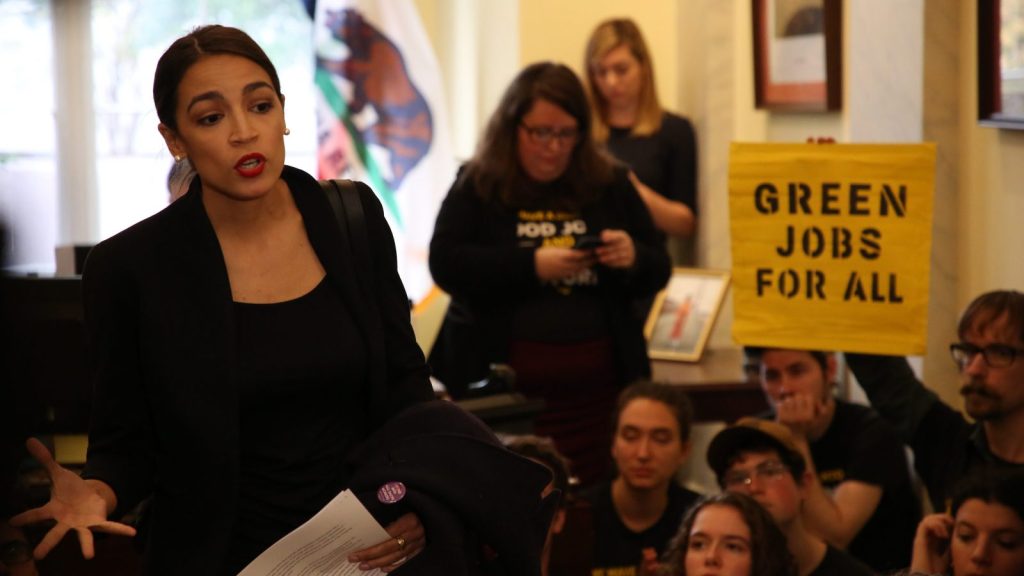 Democrats successfully flipped the House last week, and they’ve set their priorities for January: reforming voting, government ethics, and campaign finance laws. Surprise! Climate change isn’t on the list. Not exactly a shocker considering that Democrats don’t even have an economy-wide plan to tackle climate change yet.

Guess who does? Young people and newly elected Democratic Representative Alexandria Ocasio-Cortez. A group of 150 youth activists held an hour-long sit-in in House Minority Leader Nancy Pelosi’s office in D.C. on Tuesday. Their goal was to get Democrats to embrace a sweeping plan called the Green New Deal, and they came prepared with a draft resolution.

The protestors are members of a climate group called the Sunrise Movement and a progressive organization called the Justice Democrats. Two of Sunrise Movement’s leaders, Evan Weber and Varshini Prakash, have been on the Grist 50 — our annual list of up-and-coming changemakers. The activists were joined by Ocasio-Cortez, who voiced support for the Green New Deal — a plank of her campaign platform. But what is this “Green New Deal,” anyway? This video tells all:

It’s unlikely such legislation would fare well in the Republican-controlled Senate. Even some Democrats might hesitate to back it: After all, many of them are still taking oil money to try and win elections, as representative-elect Lizzie Fletcher did in Texas’ 7th District.

Nancy Pelosi was quick to respond to the protestors, saying that her office was “inspired” by their advocacy. Pelosi has indicated she intends to revive a committee on climate change that was established back in 2007 and disbanded in 2011. Unimpressed, the Sunrise Movement tweeted that Pelosi’s plan is akin to “bringing a squirt gun to a wildfire.”

There is new evidence that a Green New Deal would be embraced by voters, according to a new nationwide poll from survey group YouGov. As Alexander Kaufman of HuffPost reports, around half of folks who cast ballots in the midterms either “strongly” or “somewhat” support charging companies pollution fees and giving unemployed Americans green jobs.