While hurricanes struck, Scott Pruitt was up to some interesting activities 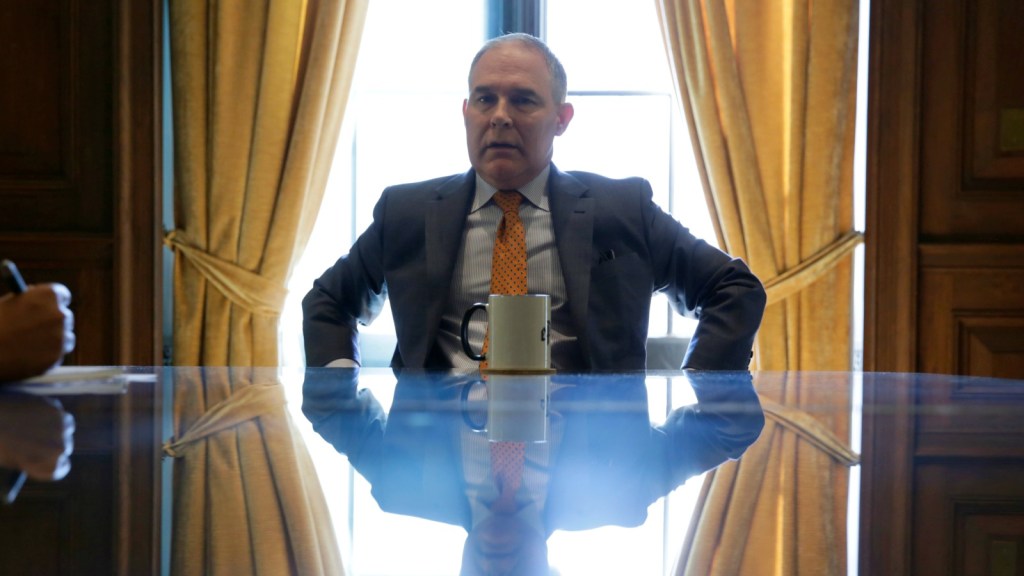 While hurricanes struck, Scott Pruitt was up to some interesting activities

The devastation from hurricanes Irma and Harvey, the two weeks of catastrophic flooding, and the toxic aftermath should have been opportunities for the head of the EPA to snap into action. Had Scott Pruitt done so, it would have been in stark contrast with his tenure so far, which has mostly consisted of making the case that the regulatory power of the EPA should be undermined and advocating that his agency be made smaller in size and scope, be deprived of a robust budget and enforcement power, and shift focus to what he likes to call “regulatory certainty” for polluting industries.

In the past, the EPA’s job in the aftermath of storms has been to help ensure that victims do not return to homes and neighborhoods that are toxic cesspools. The environmental aftermath of Harvey and Irma has been particularly devastating, with Superfund sites that have flooded, pipelines that have have leaked, forced evacuations because of explosions at the Arkema chemical plant, and a hazardous mix of floodwaters and sewage.

A week ago, George W. Bush’s EPA administrator, Christine Todd Whitman, wrote a scathing assessment in the New York Times of how Pruitt has been performing on the job. “The agency created by a Republican president 47 years ago to protect the environment and public health may end up doing neither under Mr. Pruitt’s direction,” she noted. When reflecting on Pruitt’s performance during Hurricane Harvey, she added that the EPA’s recent actions, including the EPA’s attack on an AP reporter, “are only the latest manifestations of my fears.”

Whitman may have missed some of Pruitt’s other activities. During the two hurricanes, the EPA administrator has appeared in far-right media, blasted the Obama administration and the mainstream media, disparaged discussions about climate change, and rolled back more regulations. Here are some noteworthy Pruitt sightings that took place during the recent weeks when severe weather battered the United States:

Aug. 28: Harvey’s deluge was in its fourth day, the death toll had risen to nine, and parts of Texas had already seen nearly 40 inches of rain when Pruitt had an interview with the right-wing media site Breitbart. At the end, host Alex Marlow pressed Pruitt on his response to coverage that connected the hurricane to climate change. What he didn’t mention was the growing consensus among scientists that climate change will worsen the severity of these storms. A discussion about “a cause and effect isn’t helping the people of Texas right now,” Pruitt replied. “I think for opportunistic media to use events like this to, without basis or support, just to simply engage in a cause-and-effect type of discussion, and not focus upon the needs of people, I think is misplaced.”

Over the course of the two storms, Pruitt would have several opportunities to repeat this observation.

Pruitt explained what the EPA was doing to respond to Harvey: First, he praised his fast response to Texas’ request to waive gasoline mix requirements to avert shortages. He then mentioned a refinery monitoring center that is working “with industry, private-sector folks to ensure that things are secure.” Finally he added that the EPA is observing drinking-water quality and any potential contamination from landfills.

Aug. 31: The Arkema chemical plant exploded near Houston. The same day, six Senate Democrats sent a letter to Pruitt asking him to respond to a series of accusations about how he’s limited transparency and public information access at the EPA. “At your direction, the political leadership of the U.S. Environmental Protection Agency is taking deliberate steps to thwart transparency,” the senators wrote. “It is essential to the functioning of our democracy that our government does its business in the open. Yet according to recent press reports, you are taking measures to conceal your official actions.”

Sept. 3: The Associated Press reported that the EPA was not on the scene to survey the Houston area’s Superfund sites that were underwater and found seven sites flooded. (The EPA later estimated from aerial imagery that there were actually 13.) In response, the EPA put out a statement accusing one of the bylined reporters of inaccurate reporting because he was in Washington, D.C., and not in Houston, despite the fact that the AP had a reporting team on the scene. The EPA went on to link to conservative press to prove its point, and Pruitt’s Twitter account shared the press release.

Sept. 8: Harvey had quieted, but now, eyes were turned to Irma’s growing strength and its unclear path toward Florida. The Arkema explosion occurred just one week before Pruitt appeared on an ABC News podcast to discuss Harvey’s aftermath. In it, he defended delaying a regulation that lays out the specific information chemical companies like Arkema are required to provide first responders in the event of chemical explosions similar to the one in Houston. When asked about the “hype about climate change,” Pruitt answered, “Will there be a time and place to perhaps discuss that and debate that? Sure,” he said. “But not in the midst of the storm, not in the midst of the responses, because there’s enough to say grace over right now.”

Sept. 6: On the day that Hurricane Irma — which was at certain points a Category 5 storm — reached Puerto Rico after leveling some islands in the Caribbean, Pruitt, along with Rick Perry and other Cabinet members, were scheduled to accompany Donald Trump on a visit to an oil refinery in North Dakota, where the president delivered a speech on taxes. Pruitt didn’t attend, an EPA spokesperson confirmed, but Trump still gave the agency a shoutout in the aftermath of Harvey: “We’ve ended the EPA intrusion into your jobs and into your lives. And we’re refocusing the EPA on its core mission: clean air and clean water.”

Sept. 7: Pruitt gave a phone interview to CNN in which he repeated the same line he used with Breitbart when asked about climate change. “To use time and effort to address it at this point is very, very insensitive to this people in Florida,” he said.

The most vulnerable areas of Florida, Georgia, and South Carolina were busy engaging in the evacuation of nearly 7 million people, but that didn’t stop Miami’s Republican mayor from discussing climate change in relation to the storm.

“If this isn’t climate change, I don’t know what is,” Mayor Tomás Regalado said two days later, after he declared a Sept. 8 State of Local Emergency in his city.

Sept. 11: On Monday, Pruitt gave a wide-ranging interview to the Washington Examiner from his EPA office in Washington. The stories reported that Pruitt went after Barack Obama’s environmental record and his other adversaries:

“I’ve got to say this to you: what is it about the past administration?” Pruitt said. “Everyone looks at the Obama administration as being the environmental savior. Really? He was the environmental savior? He’s the gold standard, right? Well, he left us with more Superfund sites than when he came in. He had Gold King [the 2015 mine wastewater spill] and Flint, Michigan [drinking water crisis]. He tried to regulate CO2 twice and flunked twice. Struck out. So what’s so great about that record? I don’t know.”

“If Chancellor Merkel … really cares about reducing CO2 in this world, why is she going away from nuclear?” Pruitt asked. “It’s so hypocritical for countries to look at the United States and say, ‘You need to do more.’ Really? So, we’ve reduced our pollutants under the Clean Air Act [criteria pollutants and CO2].”

Sept. 12: Irma had already flattened Barbuda, leaving 95 percent of the buildings destroyed and 1 million people in Puerto Rico without power for what could be months. Seventy-five percent of Florida was without power in the aftermath of the weekend’s storm, and the U.S. death toll had risen to 22. That’s when the EPA announced a two-year delay for a 2015 rule that set the first limit on toxic metals that can be discharged into wastewater from power plants. “Today’s final rule resets the clock for certain portions of the agency’s effluent guidelines for power plants, providing relief from the existing regulatory deadlines while the agency revisits some of the rule’s requirements,” Pruitt said in a statement.

This delay only adds to Irma victims’ challenges: Not only do they have to rebuild, but the Trump administration’s EPA isn’t doing much these days to make their water and air safer.