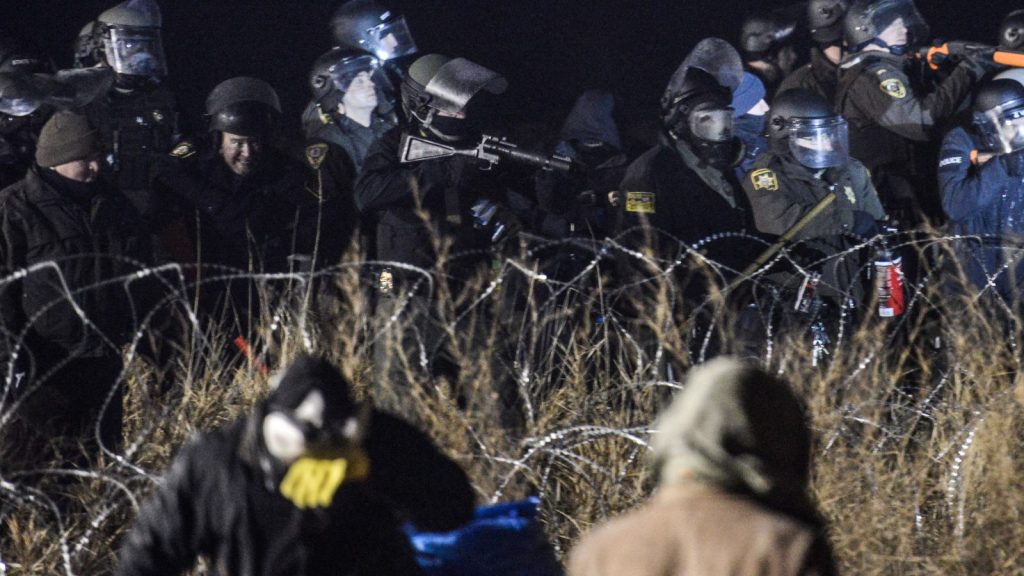 Police in North Dakota turned tear gas, rubber bullets, and water cannons on 400 Standing Rock protesters Sunday night as temperatures dipped into the mid-20s. At least 167 protesters were injured and seven were taken to the hospital. Activists at Standing Rock and beyond are wondering why President Obama has yet to speak about the incident.

“Standing Rock is the moral center of the nation right now,” said 350.org founder Bill McKibben. “The real question is why there’s no response from the White House to the kind of abuses that would make us protest loudly if they happened abroad.”

The clash started on Sunday when about 100 protesters, who call themselves water protectors, tried to clear a police barricade from a bridge between the Standing Rock encampments and Bismarck, the nearest large city. The pair of burned out military vehicles that make up the barricade have blocked the main route to Bismarck for three weeks, forcing emergency vehicles and other traffic to take a 20-mile detour.

“Attempting to clear the road was met with police spraying people with water cannons in 26 degree weather — that’s deadly force, it’s freezing outside,” said Tara Houska, national campaigns director for Honor the Earth, in a statement. “They want to kill people for clearing a road?”

Observers from the National Lawyers Guild at the site confirmed that multiple protesters were left unconscious or bleeding and that one Native elder went into cardiac arrest. One law enforcement officer was also injured.

The Standing Rock Sioux and other groups have called on President Obama to respond to the more aggressive tactics and also to issue an executive order halting all construction of the Dakota Access Pipeline.

With construction on the pipeline stalled as talks between the government and the Standing Rock Sioux continue, Obama has made few comments about the standoff. In an interview earlier this month, however, he said his administration would let the situation “play out for several more weeks and determine whether or not this can be resolved in a way that I think is properly attentive to the traditions of First Americans.”

But unless either Obama or the Army Corps of Engineers acts soon, any resolution will likely come after President-elect Trump takes office. Trump has vowed to speed up the approval of energy projects. He also has between $500,000 and $1 million personally invested in the pipeline. Kelcy Warren, chief executive of Energy Transfer Partners, the company behind the pipeline, contributed $100,000 to the Trump Victory Fund.

“President-elect Trump has no regard for the environment and cares even less about those of us trying to protect it.” said Kandi Mossett, an organizer for the Indigenous Environmental Network. “The Obama administration, now more than ever, has to step up and either rescind the permits, call for a full Environmental Impact Statement or flat-out reject the Dakota Access Pipeline project from moving forward.”