With or without the U.S., the world's going to move forward on climate change 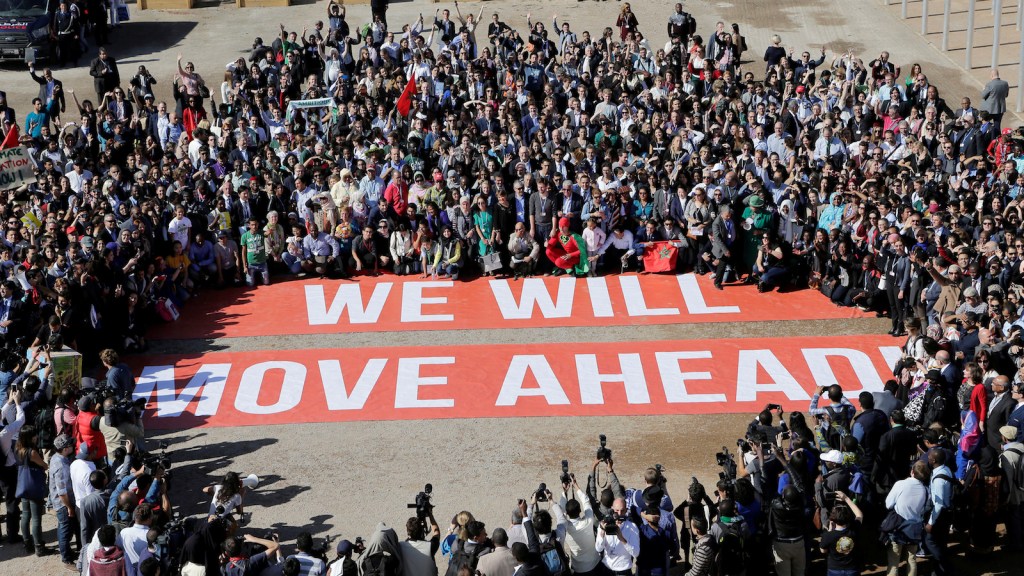 With or without the U.S., the world’s going to move forward on climate change

The last time Marrakech, Morocco, hosted an international climate conference in 2001, negotiators were coming together to discuss how to carry out a climate change treaty, the U.S. had a Republican president, and the new administration had “no interest” in implementing a deal that had been signed by a Democrat.

Negotiators, back in Marrakech for COP22, faced a similar crisis the last two weeks: They began work on the eve of the U.S. election to discuss implementing the climate change agreement reached last year in Paris. Then the election results came in and sent shock waves through the proceedings, as Donald Trump has vowed to yank the United States from the agreement.

But the Marrakech conference’s outcome serves as a reminder that the world isn’t exactly where it was 15 years ago. Working early into the morning Saturday, international delegates aimed to send an unambiguous signal with the final text: countries will push forward.

“Country after country here in Marrakech made it crystal clear over the last week,” said Alden Meyer, director of strategy and policy at the Union of Concerned Scientists. “They intend to implement and strengthen the Paris Agreement.”

Negotiators agreed on a time frame to map out a rulebook that moves forward on Paris. There were more pledges to remain committed to climate action — the usual fanfare — and some signs that countries, cities, and private companies will stay the course on climate action.

Still, negotiators pushed off essential decisions on finance and transparency until their 2018 meeting in Poland, when Trump administration officials may or may not be there to derail talks.

For the time being, global progress on climate change seems like it’s best measured by diplomats’ plans to make plans.

The conference in Morocco technically included the first Meeting of the Parties to the Paris Agreement, because the agreement entered into force in early November, years earlier than expected. For climate negotiators that was reason enough to celebrate in Marrakech.

“This COP is first and foremost about a celebration of the entry into force and convening of the first meeting of the parties,” said Elina Bardram, head of the European Union delegation. That excitement yielded the Marrakech Proclamation, a document that basically says countries will follow through on promises, and the Marrakech Partnership for Global Climate Action, an alliance of private and public parties to drive action in the years leading up to 2020. Both passionately reiterate the global commitment to the Paris Agreement.

After delegates quit popping champagne and quaking over the U.S. election, they agreed on a few preliminary commitments to work on for the next two years.

If the U.S. quits the Paris climate deal, or even the United Nations climate change body at large, it will leave a leadership vacuum. At COP22, there were already signs other countries are prepared to fill the void. Notably, China has stepped forward. Last week a Chinese foreign minister in Marrakech rebuked Trump’s claim that China invented the climate change hoax, pointing to leadership from Ronald Reagan and George H.W. Bush on international climate talks before China was even involved. The head of the E.U. delegation also said at the conference that European nations would rise to the occasion, as they did when the U.S. dropped out of the Kyoto Protocol.

Cities and and the private sector will also continue to play a major role in global climate efforts. In the last days of the conference, 365 companies promised climate action even if the U.S bows out. Separately, more than 100 companies met at COP22 to discuss steps like making low-carbon investments and reducing emissions from manufacturing to market. The number of businesses making commitments has more than doubled since Paris last year. More than 7,000 mayors — governing over 8 percent of the world population — also announced efforts to drastically cut emissions.

“[We’ve] had a set of truly impressive activities taking place in and around the COP to mobilize business, the finance sector, subnational governments, and other climate leaders,” said U.S. climate envoy Jonathan Pershing in Marrakech. “This COP is about much more than negotiations; it’s an important signpost on the pathway to a low-emission, climate-resilient economy, and the world is accelerating on that pathway.”

Countries agreed to consider transferring a pot of money meant for small projects that’s tied to the Kyoto Protocol to help implement the Paris Agreement. Over the past two weeks, four countries promised to fill the fund’s coffers with $81 million. A fund that helps poorer countries access climate technologies brought in another $23 million. According to Joe Thwaites of the World Resources Institute, that “sends a really strong signal” about the future of climate finance.

But the biggest monetary decisions have been punted until 2018. The United Nations has promised to mobilize climate adaptation funds to the tune of $100 billion a year beginning in 2020, and they’re still a long ways from that goal.

A plan spearheaded by Australia and the U.K., released ahead of the COP, details how rich countries could raise the $100 billion a year. But analysis from organizations like WRI and Oxfam suggest that even if countries meet those pledges, they’ll still need to be scaled up in the future.

“Developed countries are resisting any decision which really compels them to step up,” says Tracy Carty, Oxfam’s COP22 climate policy lead. “This needed to be the COP that turned a corner, but instead it looks like the issue is going to be kicked along the road to the next COP.”

Firm details on transparency, like how countries will monitor and report their progress on climate goals, may also have to wait for 2018. While countries such as Germany and Canada pledged $50 million to a transparency initiative to help countries report progress, the parties are still working on a program for sharing information.

As the Paris rulebook comes together, countries have vowed that transparency will be baked into measuring, reporting, climate finance, and technology development.

Countries agreed to hash out a system before 2018 to increase emissions cuts in future years. The United States, Germany, Mexico, and Canada released mid-century decarbonization strategies — a goal set in the Paris Agreement.

On the last day of the COP, a group of nearly 50 of the world’s most vulnerable countries also announced plans to convert to 100 percent renewable energy as soon as possible.

More incremental progress is expected at COP23 in Fiji next year, but 2018 will be the “year to watch for,” said WRI’s Yamide Dagnet. The meeting in Poland could be as significant as last year’s in Paris. It’s the deadline for parties to set all the implementation strategies for making good on their Paris promises. It’s also the year when countries will reevaluate their commitments and hopefully increase their ambition.

But the swift entry into force of the Paris Agreement has diplomats negotiating a slippery balance. “They want to make sure they don’t rush decisions,” said Thwaites, “that they allow as many countries as possible to join the agreement and be part of that decision-making process.” At the same time, many of the most vulnerable nations want to see action as soon as possible, with no backsliding.

In the end, parties seemed satisfied with the Marrakech negotiations. “COP22 has been what it needed to be,” said U.N. climate chief Patricia Espinosa, “a COP of action that has accelerated progress under the Paris Agreement across finance, new initiatives, ambition, and solidarity.”

Though U.N. officials may be encouraged by their progress, they’ve got a lot more hard work to come if there’s to be any chance of limiting warming to 2 degrees C — let alone 1.5 degrees — above pre-industrial levels. Neither the Paris nor Marrakech negotiations get us remotely close to that goal, so now the focus turns to the the 2018 conference. Over the next two years, it will become clearer whether the 2016 Marrakech meeting was the point at which climate action swelled to meet and exceed the ambition of Paris — or another year in which U.S. politics stalled progress, again.