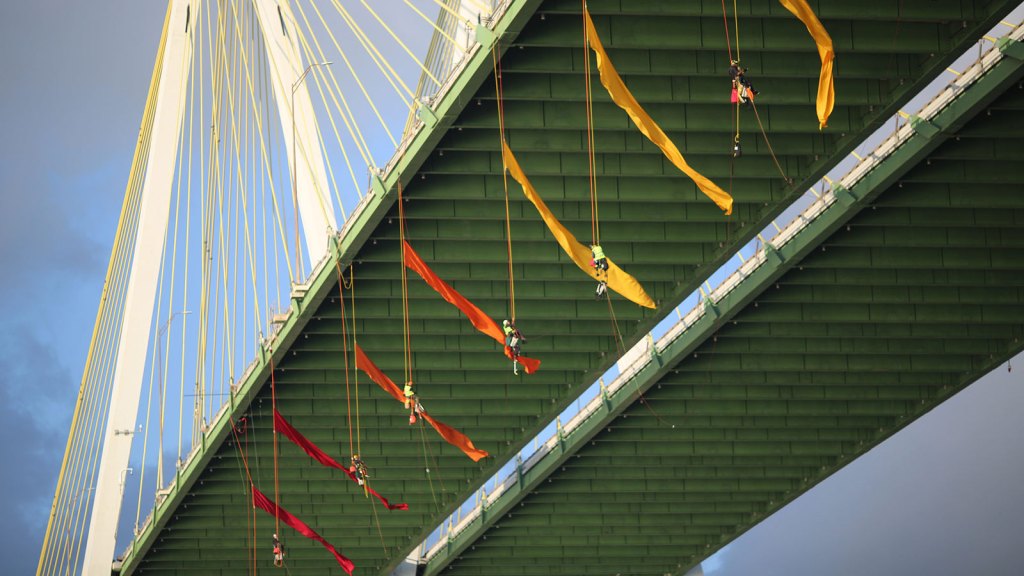 Greenpeace USA climbers form a blockade on the Fred Hartman Bridge in Baytown, Texas Greenpeace
Hanging in the balance

It was early in the morning last Thursday, and Jonathan Butler was standing on the Fred Hartman Bridge, helping 11 fellow Greenpeace activists rappel down and suspend themselves over the Houston Ship Channel. The protesters dangled in the air most of the day, shutting down a part of one of the country’s largest ports for oil.

More than 700,000 barrels of oil passed through the Houston Ship Channel last year, accounting for a third of U.S. crude oil exports. From the bridge, Butler could see the labyrinth of refineries on both sides of the channel — the type of facilities which Texas had recently passed a law to protect. The law was one of a wave of so-called critical infrastructure bills that state lawmakers have enacted across the country to punish protesters who interfere with oil and gas operations.

Butler and roughly two dozen other activists planned to end their protest 24 hours after it started. But before they could, the Harris County Sheriff’s Office arrested the Greenpeace activists and charged them with a felony — obstructing critical infrastructure — making them the first people to be charged under the new law. It makes knowingly damaging so-called critical infrastructure a third-degree felony, on par with indecent exposure to a child. If convicted, they could spend two years in prison.

Nicole Debord, a Greenpeace attorney, called the charges “an unusual test case” and said she looks forward to challenging the law. “This arrest didn’t have to happen,” she said. “The protest was scheduled to end at a certain time, and if law enforcement had just let the protesters be, they would have ultimately just ended the protest and everyone would have walked away.”

The Harris County District Attorney’s office also charged the protesters with obstructing a highway and trespassing, a misdemeanor that carries up to 180 days in prison and a $2,000 fine. Of the 26 protesters, 22 have been charged with a federal misdemeanor for obstructing navigable waters, which could mean as much as one year in prison and a $2,500 fine. They were all released over the weekend after spending two nights in custody.

In the years after protests against the Dakota Access Pipeline captured national attention, states have rushed to pass laws that levy hefty jail terms and fines for protesting near pipelines, compressor stations, refineries and other infrastructure deemed “critical.” So far Texas and seven other states across the Midwest and South have put these laws on the books. Similar legislation has been introduced in at least a dozen others, according to the International Center for Not for-Profit Law, a group that has been tracking legislation criminalizing protest around the country.

Proponents of such laws — many with ties to the fossil fuel industry — have argued that they’re necessary to deter rogue activists who might damage oil and gas facilities and put lives at risk. Their opponents point out that laws already exist to punish such activities and that the new wave of laws criminalizes free speech.

The laws are modeled after legislation circulated by the American Legislative Exchange Council, a conservative nonprofit backed by the Koch brothers. The group has been pushing such laws in state legislatures, touting its successes in newsletters. The Texas lawmakers behind the state’s critical infrastructure bill attended ALEC conferences in the last few years.

After Louisiana passed one such measure last year, at least 16 protesters have been arrested and charged under the state’s “critical infrastructure” law. Three of them, who were trying to block construction of the Bayou Bridge Pipeline, are now fighting the charges and challenging the law in a U.S. district court, claiming it violates their free speech rights.

Brianna Gibson, a Greenpeace activist arrested and charged last week alongside Butler, said the group had picked the Fred Hartman Bridge in part to highlight the disproportionate burden the fossil fuel industry places on black and brown communities in East Houston. Residents in those neighborhoods deal with poorer air quality and a higher risk of cancer than on average in the city.

Gibson, who lives in Chicago and was one of the 11 who rappelled down the side of the bridge, said she felt a responsibility to act because “my family, my community, and the people I love are deeply impacted by issues like environmental racism.”

Dane Schiller, a spokesperson for the Harris County district attorney’s office, said that the case will be presented to a grand jury, which will decide whether there’s sufficient evidence for a felony indictment. “Prosecutors could be personally sympathetic to their message and their cause, but these individuals knowingly and deliberately broke the law,” he said.

Although parts of the Houston Ship Channel were shut down for 22 hours, the economic impact appears minimal. Petty Officer Kelly Parker, a spokesperson for the U.S. Coast Guard, told Grist that sections of the ship channel are routinely shut down when fog makes it hard to see. As a result, long lines to pass under the bridge are common, and most operators factor in delays.

Parker estimated that about 300 vessels pass under the Fred Hartman Bridge every day, the vast majority of which are smaller towing and pilot vessels. “Obviously we don’t want to shut down any part of the ship channel, but it does happen fairly frequently due to weather,” he said.

Both Gibson and Butler worry about what happens if they get a felony conviction. Gibson, a first generation college graduate, is helping support her mother and brother’s children. Butler said that life was “difficult enough” as a black and queer person and a conviction would make life “a lot more difficult.”

Still, Butler believes the protest was worth it. “The impact of climate change is happening now, and it’s going to continue to happen if we don’t take bold action. That’s what it really comes down to.”