In 2016, Zaria Forman got the opportunity of a lifetime. Officials at NASA reached out to the Brooklyn artist — who hand draws massive, pastel landscapes depicting polar ice — and invited her to join their IceBridge operation.

According to Forman, as part of IceBridge, NASA scientists have flown over the same parts of the Arctic and Antarctic each year for the past decade, mapping the geography of ice with lasers, infrared sensors, digital photography, and a gravimeter (which measures gravity). The survey helps the researchers estimate the magnitude of sea-level rise. 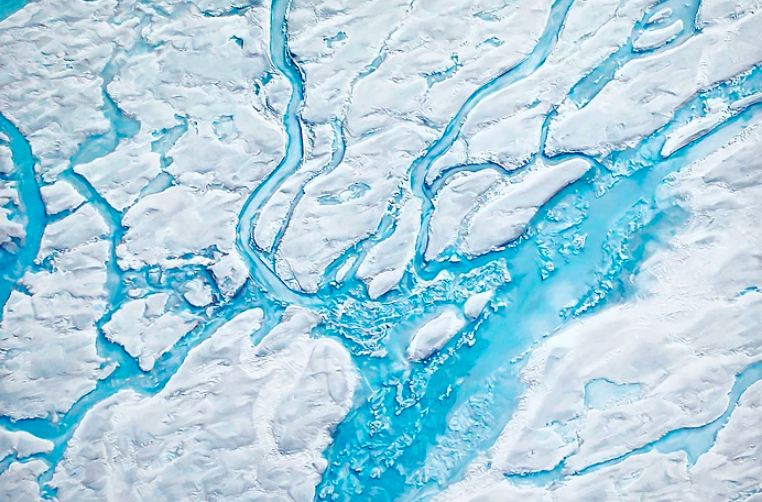 “When they emailed and said, ‘Hey, we love your work. Would you like to come fly with us?’ I was like, ‘Excuse me? This has to be a hoax,’” Forman tells Grist, as she sits in front of a massive mural depicting Greenland’s Jakobshavn Glacier, which was installed on the side of a building in Telluride, Colorado, for this weekend’s Mountainfilm festival.

Grist caught up with Forman at Mountainfilm to discuss how climate change became the subject of her work and the role of art in communicating the scope and seriousness of warming. This conversation has been edited and condensed for clarity.

Q. How did you get started making art about climate change?

A. I went to Greenland in 2007 with my family. My mother was a landscape photographer, so we traveled to really remote places once a year for about a month my whole life growing up. Thatʼs what instilled a love of landscape in me, and thatʼs why I started drawing landscapes.

In 2007, climate change was not a topic of discussion in the United States like it is now; but in Greenland, it was an everyday thing. The people visiting were either scientists coming to study the ice, or newscasters coming to write about it, or government officials coming to learn. The locals have to deal with it on a daily basis and adapt their lifestyle in order to survive. Thatʼs what opened me up to recognizing how massive, on a global scale, the climate crisis is. At the same time, I was looking for a more specific purpose to focus my work. I felt like that was a conversation that needed to be addressed in art.

Q. And this mural of the Jakobshavn Glacier — that must have come out of your NASA experience. What’s significant about this particular glacier?

A. Itʼs probably one of the most famous glaciers in the Arctic. Itʼs one of the largest, fastest-moving glaciers. And the speed at which it’s moving has sped up significantly in the last 10 to 20 years. The face of the glacier has been retreating an exorbitant amount. It dumps so many icebergs into the ocean that they make up about 10 percent of all the icebergs in the Arctic. So, it’s a huge factor in terms of what we can expect for sea-level rise.

And it has a more personal meaning for me. Like I said, I visited Greenland for the first time with my family in 2007, and that’s the first time I ever saw a glacier — this glacier, actually. And I was planning a trip with my mother to go back five years later to the same location and travel farther north. And while we were planning the trip, my mother ended up getting brain cancer and passing away before we were able to carry it out. I ended up carrying out the trip in her honor, and she asked me to spread her ashes into the fjord where this glacier dumps its icebergs. So it’s a very special place for me.

Q. How do you make your drawings look so realistic?

A. Time plays a big part in my work. Itʼs that one moment where the light looks stunning, with the fog in the background and the waves, and the little penguin leaps into the water. There are these really short moments — even if itʼs five minutes or the one second that my shutter clicks. Then I go back into the studio and take that one moment and draw it out, both literally and figuratively, into several weeks or sometimes months.

Itʼs a way for me to connect these places that I love very much, and I hope that connection will translate to the viewer and allow them to have a piece of that as well. 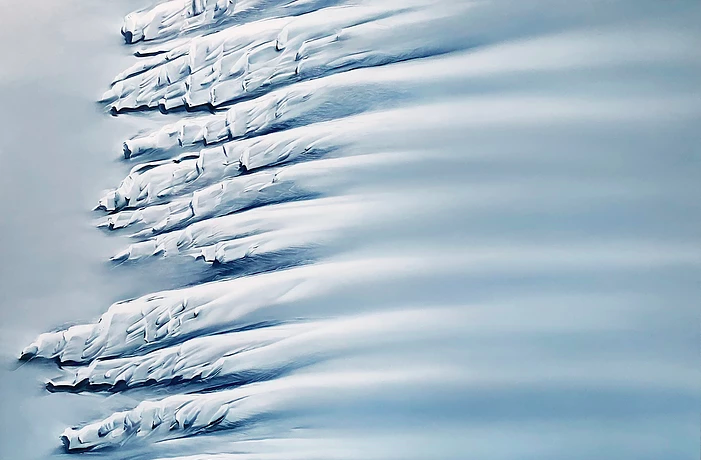 Q. What do you hope people take away from your art?

A. Art has a special ability to tap into people’s emotions. I think it’s harder for scientific facts, graphs, and numbers to achieve that same emotional effect. I’m trying to connect people with this massive crisis on an emotional level. Because what’s happening in Greenland — these places at the forefront of climate change — is pretty far from most of our everyday lives.

I’m trying to recreate these landscapes in all of their minute detail. That’s why I draw them at such a large scale, so that I can imbue them with as much detail as I possibly can and show people something they’ve never seen before, but that does affect their everyday lives in a more abstract way. I try to portray the beauty of these places, not the destruction, so we can fall in love with how insanely gorgeous these places are. The hope is that seeing the work will help make an emotional connection and spur positive action.

Q. Why do you think NASA reached out, beyond admiring your work?

A. It was interesting to me that NASA was reaching out to me, a little artist in Brooklyn, to come flying with them and spread the word — like my little social media following is something they need. NASA is huge, and it was shocking to me to understand that they needed help communicating their message. The more I learned, the more I realized, “Oh right, we’ve been studying this for years and still half of our general public doesn’t really understand or believe what’s happening.”

We are still faced with this challenge of how to communicate the importance of the changes that are occurring, the importance of what this massive mission is doing, and the funding that they need to continue studying what’s happening so that we can prepare for the future. It confirmed for me that what I was trying to do is actually important. Once NASA put their stamp on it, I was like, “OK, this is important, I’m on the right path.”

Q. Sometimes we need that outside confirmation to realize the point of what we’re doing.

A. I think as an artist, and even as just one human being in this massive world, it’s like, “What difference can I make?” But really, any little difference matters. I’ve built up somewhat of a following, so I have this group of people who are listening to what I do, and I feel like I have a certain voice. But I feel like I’ve learned that if you’re really inspired by what you’re making, it will come out in the work — and that’s what people are moved by.