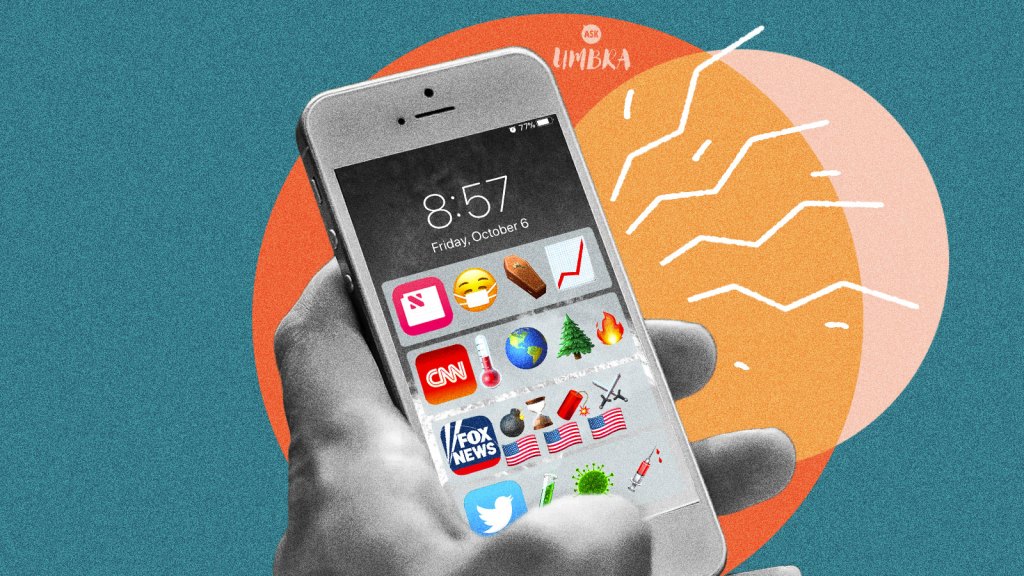 Grist
Down With Digital

Every time I feel hopeful about the state of the world, a terrible news story knocks the wind out of my sails. How do you deal with good news/bad news whiplash?

The world has long been a contradictory place full of simultaneous hope and dread. But I put most of the blame for your current predicament on how we typically absorb information about the world — from the internet. Specifically, from social media.

Let’s consider the design of social media platforms: You have family members, clothing brands, college friends, sports teams, and exes, all hollering for your attention on one emotionally chaotic feed. Your cousin’s baby! A truly grisly football injury! A banal statement from an underwear brand on racial equity! Your college roommate’s latest multi-level marketing scheme! It is a wonder that anyone who spends more than a few minutes a day online is still standing.

Digital media was designed to draw you in and keep you scrolling by triggering one emotional response after the other. You are shown so many fires at once that you become convinced that if you stop watching even for a moment, one or another will burn your house down. But ironically, you are so glued to monitoring these risks that you’re not actually doing much of anything to prepare for your house burning down in the first place.

In her recent book How to Do Nothing, artist and writer Jenny Odell cautions against succumbing to what she terms “the attention economy,” the barrage of feeds that seem to have become very built in to daily life. (I mean even “feed,” when you think about it, is such a gross word, like we’re farm animals gorging on tidbits of terrible information.) “I believe that capitalism, colonialist thinking, loneliness, and an abusive stance toward the environment all coproduce one another,” she writes. “It’s because of the parallels between what the economy does to the ecological system and what the attention economy does to our attention.”

The problem, she says, is that people taking lots of time to be with themselves and process their emotions and positions on the state of the world is not profitable to any industry. As a result, social media companies and other digital platforms have an interest in conditioning us to take in one story immediately after the other without reflection or critical thinking. That structure makes existing on the internet an emotional rollercoaster, and that’s not even getting into the actual news driving your emotional whiplash!

I would like to say the news feels worse than it is, but it is in fact quite bad. I don’t want to dwell on everything that’s going on, but it really is a bit much to have a violent insurrection, a global pandemic with an unprecedented death toll, and an increasingly polarized society all against the constant, threatening backdrop of climate change!

Say you’re trying to focus on just one of those catastrophes. We’ll pick climate change, since this is a column about climate change, and in the last week there actually was a significantly promising development for meaningful climate legislation here in the United States: Democrats won a majority in the Senate as a result of surprising party victories in two runoff races in Georgia. For many advocates of voting rights, environmental justice, and reproductive access, it was a moment to celebrate. But then, later the very same day, pro-Trump rioters stormed the Capitol to try to overturn the results of the presidential election. So yeah, that victory glow faded pretty quickly.

So why don’t good news feelings and bad news just feelings … cancel each other out? It turns out the human brain tends to respond more strongly to negative information than positive. “When equal measures of good and bad are present, however, the psychological effects of bad ones outweigh those of the good ones,” wrote psychologist Roy Baumeister and his co-authors in a famous paper titled, provocatively, “Bad Is Stronger than Good.” They argue there’s an evolution-based psychological theory for that: From a survival standpoint, the human brain should respond more strongly to perceived threats than to indicators of well-being. Learning that someone is coming to murder you, for example, requires a more urgent response than getting confirmation that your crush really likes you back.

I asked Ethan Kross, director of the Emotion and Self-Control Laboratory at the University of Michigan and author of the book Chatter, if he felt that theory applies to the news landscape — meaning that any positive news development would seem to be erased by a bad one. “I think that is a reasonable inference to make,” he said. “Certainly people may be more drawn to that negative information, because it has more potential importance for their well-being.” As someone who works for a digital news publication, it brings me no pleasure to tell you that the very structure of digital media inherently makes you especially vulnerable to frazzled feelings. And the entire social media industry is basically impossible to separate from news media at this point, as one in five Americans says social media is their primary pathway for political and election news. Eep!

Alison Holman, a health psychologist and professor of nursing at the University of California, Irvine , has devoted years of research to the impacts of traumatic news media on mental health, and says that it all points to one conclusion: Limit your intake. There is no benefit to being plugged into the news cycle all day every day, as laudable as it seems to be “on top of” everything that is going on. Because you will not, in fact, be on top of it — you will be crushed by it, and you won’t have any more control over what’s going on than you will if you check a couple of select, trusted news sources once or twice a day.

Holman also recommends the tactic of giving your brain something nourishing to focus on immediately after taking in some kind of upsetting news: music, a walk, a comforting book. “Do something immediately to sort of nip [those feelings] in the bud,” she says, “just because the longer that negative stuff can sit there in the mind, you start ruminating, and the longer that goes on, the harder it’s going to be to stop.”

So there you have it! You, a human, are simply wired to dwell on bad news, and that’s an unfortunate fact of our biology but what you can control is how much bad news you take in. And it does not have to — should not, in fact — be a constant, soul-crushing stream. It’ll ruin your ability to focus, your mood, even your physical health — to say nothing of your sense of hope for a better future.

So I won’t be offended if you stop reading this! Go take a walk. And don’t log on “just to check what’s going on” again until tomorrow morning — the same news will still be there.