It’s Monday, May 10, and Southern California is cracking down on warehouse pollution. 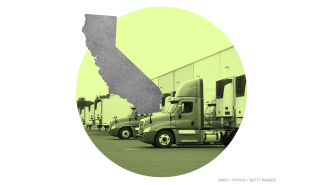 The air pollution agency for more than 18 million people in Southern California, which has the nation’s worst air quality, voted on Friday to implement a new rule that will force warehouses to cut emissions from the trucks that service them.

The plan will affect 3,000 of the largest warehouses in the area, which has the highest concentration of warehouses in the country. Trucks coming and going from these facilities are major contributors to nitrogen oxide and particulate matter air pollution, which are linked to heart and lung disease.

The new rule adopted by the South Coast Air Quality Management District mandates that warehouses either reduce emissions from the trucks they use or take other action to improve air quality in Orange County and parts of Los Angeles, Riverside, and San Bernardino Counties. The rule is projected to result in 300 fewer nitrogen oxide related deaths and up to 5,800 fewer asthma attacks in the region between 2022 and 2031. The public health benefits of the plan are estimated to be around $2.7 billion — three times as much as the plan will cost.

The plan could also help accelerate the electrification of delivery trucks, a significant step toward reducing American carbon emissions. The regulation follows California’s landmark 2020 rule requiring more than half of all new trucks in the state to be zero-emissions by 2035.

The Colonial Pipeline was shut down after a cyberattack on Friday and has yet to be restarted. The pipeline is the largest in the U.S. and delivers gasoline, diesel, and jet fuel from Texas refineries to the East Coast, providing nearly half of the region’s transportation fuel supply.

New data show that deforestation in the Brazilian Amazon rose by 43 percent last month compared to April 2020, continuing the trend of skyrocketing deforestation under Brazilian President Jair Bolsonaro. Bolsonaro has promised to end deforestation by 2030, and the Biden administration is leading an international pressure campaign to hold him to that commitment.

Indiana Governor Eric Holcomb has signed a bill that will prevent local governments in the state from developing codes, ordinances, or regulations that ban the use of fossil fuels or mandate energy savings measures. The bill is similar to preemptions that were lobbied for by the gas industry and passed in many other Republican-led states over the past year.

DuPont gets transparent about plastics