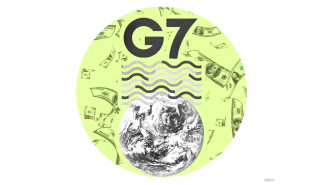 Ahead of the Group of Seven (G-7) summit that will take place from today until Sunday, investors managing a combined $41 trillion are asking world leaders to get serious about climate change. DWS Group, Legal and General Investment Management, and 455 other asset managers wrote a letter to the G-7 heads of state asking them to stop subsidizing fossil fuels, commit to net-zero emissions by 2050, strengthen 2030 emissions reduction targets, and phase out coal-fired power plants.

G-7 is an organization of the seven countries with the largest industrialized economies: Canada, France, Germany, Italy, Japan, the U.K., and the United States. The annual G-7 summit is being held in the U.K. this year.

The letter, organized by a net-zero advocacy group called the Investor Agenda, emphasizes that money from signatories will flow to countries that take on climate change. “Those who set ambitious targets in line with achieving net-zero emissions, and implement consistent national climate policies in the short-to-medium term, will become increasingly attractive investment destinations,” they wrote. “Full implementation of the Paris Agreement will create significant investment opportunities in clean technologies, green infrastructure and other assets, products and services needed in this new economy.”

The summit is being held five months ahead of the 26th United Nations Climate Change Conference in Scotland, where signatories of the 2015 Paris climate accord will review their promises to cut emissions and are expected to set more ambitious goals.

A new report from 50 of the world’s leading climate and biodiversity researchers shows that some climate policies can have negative consequences for biodiversity. Conversely, policies to shore up biodiversity are largely also helpful for climate mitigation efforts. The report urges world leaders to tackle both simultaneously.

Lake Mead, one of the Western U.S.’s two crucial reservoirs on the Colorado River, has dropped to its lowest level ever as drought continues to dessicate the West. Tribes, farms, and seven Western states depend on the Colorado River for water, but a years-long period of aridification threatens to cause major disruptions in the region.

Remember when the COVID-19 pandemic forced the price per barrel of oil to plummet? The oil industry is recovering from that hiccup just fine. On Friday, the International Energy Agency estimated that global oil demand will surpass pre-pandemic levels by the end of 2022. Demand is projected to exceed 100 million barrels per day by then.