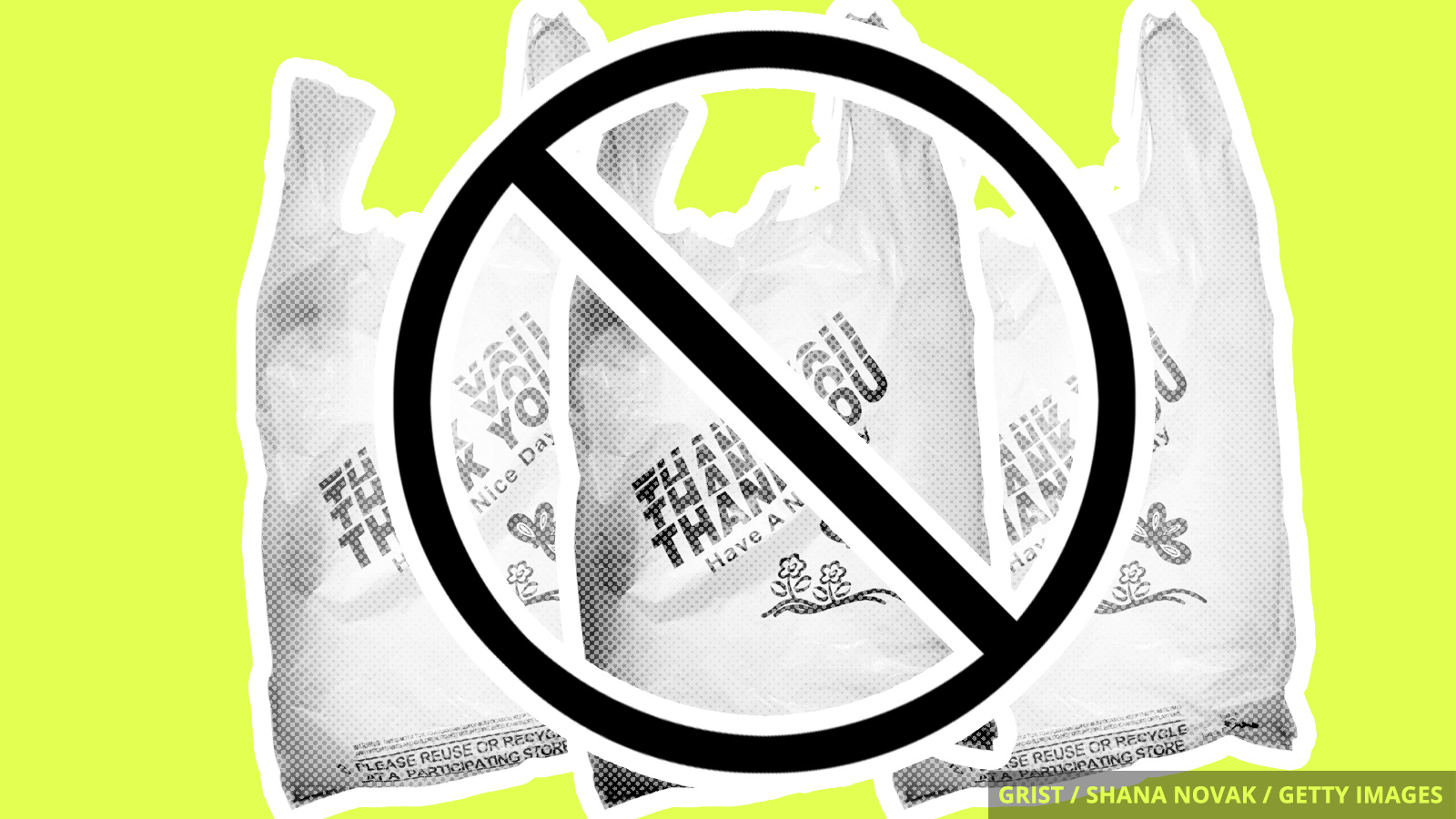 Chances are, you’ve probably shopped at a store owned by Kroger. The Ohio-based grocery chain owns regional classics like QFC, Harris Teeter, Ralphs, Fred Meyer, Food 4 Less, and more. Kroger has been around since 1883, but it’s no dinosaur! In response to growing concern about the effect of plastic on the environment, the company has decided to ban plastic bags at all of its stores by the year 2025. It’s the first major U.S. retailer to do so.

The decision, announced yesterday, means the 6 billion plastic bags sent home with customers at Kroger checkout counters every year will no longer end up in a landfill. The plastic bag phaseout will begin next year in the Pacific Northwest (Grist’s hometown, Seattle, already banned plastic bags in 2017). Kroger also announced plans to reduce the 123 million pounds of waste it sends to landfills annually by 90 percent in the next two years. That means the chain will have to recycle four times the amount of stuff it currently recycles (we hope it has a good plan in place given the recycling crisis we’ve created with China).

Instead of plastic, shoppers can choose paper bags, purchase a reusable bag for a dollar a pop, or *gasp* bring their own bags from home. Although, and it brings me no joy to tell you this, your massive tote bag collection is ruining the planet too, pal.

The plastic ban announcement is sure to put pressure on other major grocery chains to take similar steps. And more and more cities and states are churning out legislation that cuts down on plastic in big stores.

How will the 9 million people who shop at Kroger stores cope without their plastic bags? I truly don’t know, but Kroger thinks we’re ready.

Hurricane Lane, one of the strongest hurricanes on record in the Central Pacific, has brought heavy rain and landslides to Hawaii — even though it’s still roughly 200 miles away. The Category 2 storm has already dumped 31 inches of rain at one field station. Though Lane may weaken as it approaches Hawaii, the storm’s center is expected to come very close to some islands, and the government is urging residents to take precautions. Hurricanes in Hawaii are pretty rare — over the past 60 years, only two have made landfall there.

It’s been a hot summer, and farmworkers who spend long hours outside in that heat are at risk of illness and even death. Between 1992 and 2016, an estimated 783 farm laborers died from heat — and that could be a low estimate. Because many are undocumented, Mother Jones explains, they are less likely to report violations or go to the doctor because of deportation fears. Heatwaves are expected to continue to get worse, but only a few states currently spell out rules on protecting workers from the heat. Some groups — like United Farmworkers, Farmworker Justice, and Public Citizen — are working to change that by petitioning for national guidelines that require breaks for water and shade.

Saturday marks one year since Hurricane Harvey made landfall, but some Texans — disproportionately people of color and low-income folks — are still feeling its effects. Three in 10 Texas Gulf Coast residents say that they’re still experiencing disruption from the storm, according to a recent survey of 1,651 people from The Kaiser Family Foundation and the Episcopal Health Foundation. Sixty percent of black residents say they aren’t getting the aid they need, compared to 33 percent of white respondents.

It’s time to meet the next generation of climate activists