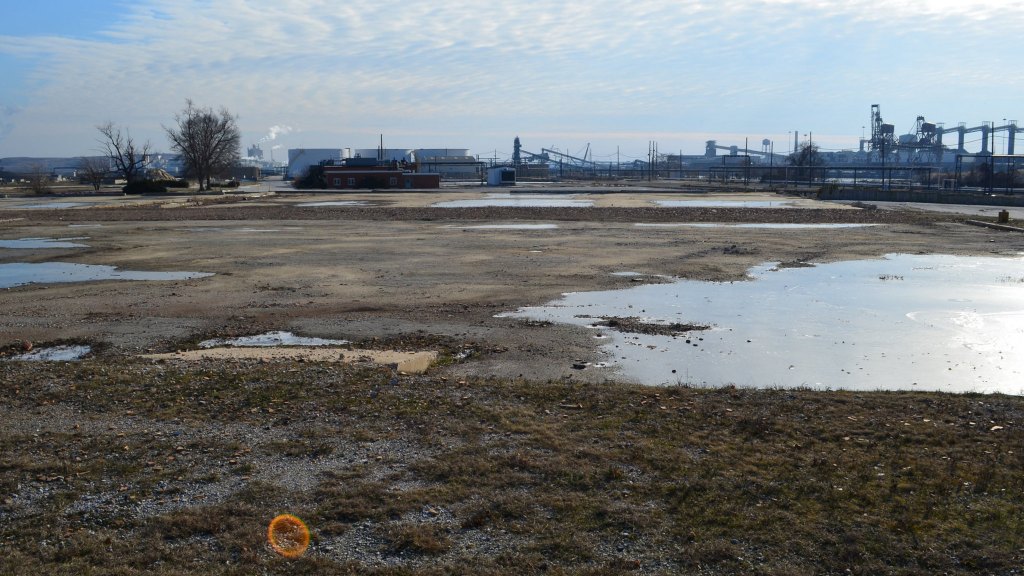 Baltimore, Md., is already home to the highest rate of death from air pollution in the United States — MIT estimates that “130 out of every 100,000 residents likely die in a given year due to long-term exposure to air pollution.” More than 600,000 people live there, which means a lot of deaths simply from breathing the air. Like so many port cities, Baltimore is largely populated by people of color: It’s 65 percent black.

Despite some setbacks, New York-based Energy Answers is seeking to open a trash incinerator in Baltimore’s Curtis Bay neighborhood later this year. Curtis Bay, which is largely segregated and about one-third black, is already toxic: It hosts a medical waste incinerator, a bunch of chemical plants, and a coal pier that covers the whole neighborhood in fine black soot. The proposed incinerator would be unique in size: At 90 acres, the waste combustion plant site* would cover the size of 70 football fields. The plant itself would cover 15 acres burn approximately 4,000 tons of trash per day.

Although incinerators get love from some environmentalists, and Energy Answers stresses its project would generate renewable energy, location matters: The site will still create emissions — and it’s slated to be built less than a mile from a public elementary school and a public high school. Even though children (some as young as 5) spend most of their days in nearby classrooms, the incinerator would be permitted to emit 1,000 pounds of lead and 240 pounds of mercury per year.

Energy Answers is accused of violating the Clean Air Act by letting its permit expire. United Workers, a group that is opposing the project, has filed a notice of intent to sue.

When he was here at Grist, Brentin Mock chronicled the fight to stop the incinerator — and provided some important context for understanding the Baltimore riots in a city that essentially poisons its children. I caught up with Destiny Watford, a 20-year-old who’s been working to stop the incinerator for the last three years. Watford is a leader of Free Your Voice, a human rights committee of United Workers.

Q. A lot of people think that an incinerator is a small smokestack — but what’s being proposed here?

A. It’s a site where trash goes to be burned — it’s thought of as an alternative to a landfill, but this one would be horrible. This particular incinerator would be burning trash to produce energy but in burning that trash, it would be burning valuable resources that could be recycled or reused in some way. There would be a lot of trucks coming in and out of our community every day, which is also a big concern for us. And the trash that would come in wouldn’t even all be from Baltimore. Curtis Bay is basically being treated as a literal dumping ground, where the nation’s trash would go to be burned.

Q. How close would this incinerator be to the high school you attended? And are there many homes close by?

A. It’s kind of insane that it’s so close: It’s close to two schools, Benjamin Franklin High School and Curtis Bay Elementary. There’s a community garden there, and homes throughout Curtis Bay and surrounding neighborhoods. And there’s a nearby recreation center and park; that park overlooks this huge coal terminal. It’s haunting. The community faces the port and there’s a sea of different businesses and industries: everything from the nation’s largest medical waste incinerator to landfills to car imports to coal export terminals.

Ironically, the site that the incinerator would be built on is the site of an old chemical plant that already pushed out a community that used to be there. The Fairfield/Wagner’s Point community were pushed out as more industry and pollution came in — community members were forced to leave. We’ve heard stories of people who used to live there and ride around on a bike, but got to a certain point and literally couldn’t breathe anymore. It’s hard to imagine it now, but we’ve heard there used to be blueberry bushes and trees — looking at it now, it’s a wasteland. It’s a toxic wasteland.

Q. What kinds of health effects have you seen there?

A. My mom has asthma. I’ve been lucky that I haven’t had any air-related health issues that I know of. My neighbor died of lung cancer a few years ago. We’ve talked to a lot of people in the community and found out that a lot of people didn’t even know the incinerator was being proposed. At a presentation, we asked how many people suffer from asthma and in a class of about 30, everyone’s hands shot up.

Q. I understand why you wouldn’t want an incinerator in Curtis Bay. What do you want to see in its place?

A. We were canvasing one day and I knocked on a man’s door. I told him about the incinerator project and asked him if he had any concerns about air quality. And what he essentially told us was, “What you kids are doing is pointless. You’re not going to change anything.” That served as an awakening moment for the group, because that’s when we realized that there is a history here.

Things like the incinerator are not new — industry’s been coming here and polluting our community. We’re used, and the community is considered a sacrifice. We’re expected to sacrifice our health in order to support development. But that isn’t OK. We realized that it wasn’t enough to stop the incinerator. So now, we’re discussing the opportunity to do solar. That entire site can be a solar farm. We’ve also been talking about recycling and composting.

Q. Why the lawsuit? And why now?

A. We’ve been met with silence from public agencies whose job is to protect the environment and our lives. Our community has been designated as a dumping ground for generations. We weren’t getting the justice that we know we deserve, and we knew that the incinerator would lead us down the wrong path. And so the intent to sue is a way of us taking matters into our own hands and holding people accountable for their actions.

*Correction: An earlier version of this post said the trash incinerator would cover 90 acres. That was incorrect. The plant itself will cover 15 acres on a site of 90 acres.