Until we collectively decide to give up fossil fuels and power the world with giant hamster wheels, this planet has a bit of an air pollution problem. Now, a team in the Netherlands wants to help.

The Smog Free Tower, designed by Daan Roosegaarde, Bob Ursem, and European Nano Solutions, is a 23-foot metal tower stationed in a park in Rotterdam that sucks pollution out of the air. Wired reports:

It does this by ionizing airborne smog particles. Particles smaller than 10 micrometers in diameter (about the width of a cotton fiber) are tiny enough to inhale and can be harmful to the heart and lungs. Ursem, who has been researching ionization since the early 2000s, says a radial ventilation system at the top of the tower (powered by wind energy) draws in dirty air, which enters a chamber where particles smaller than 15 micrometers are given a positive charge. Like iron shavings drawn to a magnet, the positively charged particles attach themselves to a grounded counter electrode in the chamber. The clean air is then expelled through vents in the lower part of the tower, surrounding the structure in a bubble of clean air. Ursem notes that this process doesn’t produce ozone, like many other ionic air purifiers, because the particles are charged with positive voltage rather than a negative.

And it’s efficient. The Smog Free Tower can purify up to a million cubic feet of air in a single hour. “When this baby is up and running for the day, you can clean a small neighborhood,” says Roosegaarde.

As an added bonus, the pollutants extracted from the air are then turned into rings — turns out smog is kind of pretty when it’s not killing you: 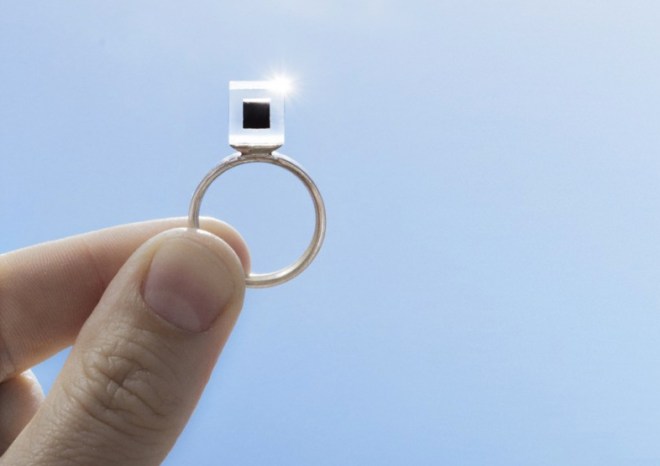 But even the designers know the Smog Free Tower is a Band-Aid, and what we really need to do is stop putting pollution into the air in the first place. “How can we create a city where in 10 years these towers aren’t necessary anymore?” he says. “This is the bridge towards the solution.”