It used to be that the Bullitt Foundation “saved the planet” the old-fashioned way, putting its money behind campaigns to spare old-growth forests, stop mines in Alaska, and clean up toxic waste. Not anymore. The Seattle-based foundation, started by local media magnate Dorothy Bullitt, has turned its attention to cities, funding projects in urban ecology, clean energy, and technology.

The much ballyhooed Bullitt Center features a canopy of solar panels that generates all of the electricity used on site; a green roof seeded with micro-organisms that captures and cleans rainwater; giant floor-to-ceiling windows that open and close automatically to regulate the temperature; and a fleet of composting toilets that looks like an army of Daleks in the basement.

And roughly a year and a half after it opened for business, the building is making waves as effectively as any grant could have done. 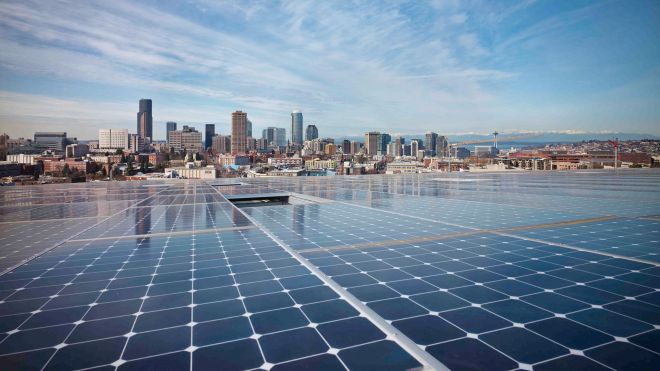 Even in Seattle, it’s possible to power an office building with the sun.Benjamin Benschneider

Just ask chemist Tom Schneider, director of product development at the Portland, Ore.-based company BEI (short for Building Envelope Innovation). Schneider, who specializes in sealants and coatings, developed a line of products a few years back that keep water from infiltrating the walls of buildings, even around leaky windows. It was something of a breakthrough in the Pacific Northwest, where incessant rain, driven by wind, has a way of getting into every minute crack, kickstarting mold and rot. Schneider and his business partners with the company Prosoco sold it as the “R-Guard” System.

It wasn’t good enough for Bullitt. One day, Schneider got a call from a member of the foundation’s project management team saying that the system was off-limits because the products contained phthalates, chemicals that can cause, as the Environmental Working Group puts it, “cell death — in your man parts.” Schneider consulted with his colleagues and his wife, swallowed his pride, and changed his recipe, replacing the phthalates with another ingredient that is more expensive, he says, but is so benign “you can eat it.”

Not only does the new recipe appear to have worked, but it inspired Prosoco to remove phthalates from all of its products. “A 3-year-old child is not going to eat a third of a story of the Bullitt Center and develop another testicle, or whatever the endocrine concerns are,” Schneider explains. “The issue will be our workers” — the people manufacturing the product, packaging it, and applying it to buildings, who are exposed to the chemicals in much higher doses.

Prosoco did not make any money on the Bullitt contract, but the shift away from phthalates — and the positive press the company has received because of its involvement in the project — have been a boon for sales nationwide, Schneider says. He now talks to college chemistry students with the message: “Some day, you’re going to be tasked with creating a product that meets certain properties. You’ll start pulling materials off the shelves of your lab. As you’re picking those materials, over here on left are materials you can eat; over to the right are materials that can kill you. Start on the left and move reluctantly to the right.” 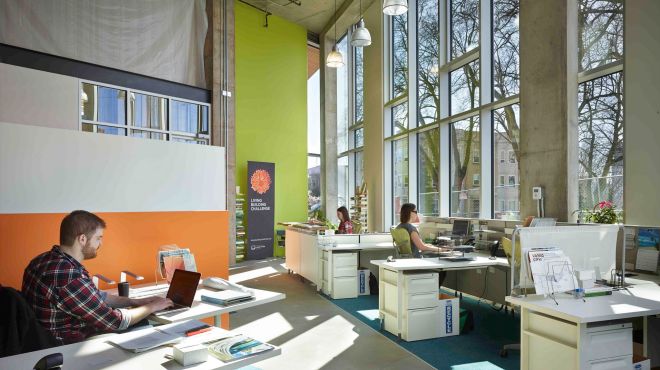 The Bullitt Center’s impacts go beyond weather sealants. The building was made possible by Seattle’s Deep Green Pilot Program, which allows builders to deviate from the standard codes in order to build more sustainably. For example, Bullitt was allowed to add two to three feet to the height of each floor to allow more sunlight in, reducing the need for electrical lighting and mechanical heating, says Chris Rogers of Point32, the company that managed the project. (The additional 10 feet in overall building height was not popular among the neighbors.)

Some of those deviations have since been incorporated into the city code. For example, the building’s solar canopy extends all the way to the property line — a feature that required a “sky bridge” permit from the city. To make that happen, the city council and the mayor had to approve changes to the building code to allow such permits for “sustainability features,” Rogers says.

Bullitt isn’t stopping there. The foundation has just signed a first-in-the-nation agreement with the local utility that will allow the foundation to sell Seattle City Light the energy it is saving via all of its whizbang energy-efficiency features — “negawatts” in industry parlance. Hayes believes that the setup, known as MEETS (short for “metered energy efficiency transaction structure”) could be a major game-changer in drawing investment dollars to energy-efficiency projects. (For a full, detailed discussion of MEETS, check out Benjamin Romano’s story in Xconomy.)

Next up: getting final approvals from the county and state to turn the building into its own water district, which will allow tenants to drink the rainwater collected on site and treated by an elaborate “ultrafiltration” system in the building’s basement. Hayes is thinking nationally as well. In his recent speeches, he’s been pushing changes to the federal tax code that would encourage more buildings like this. 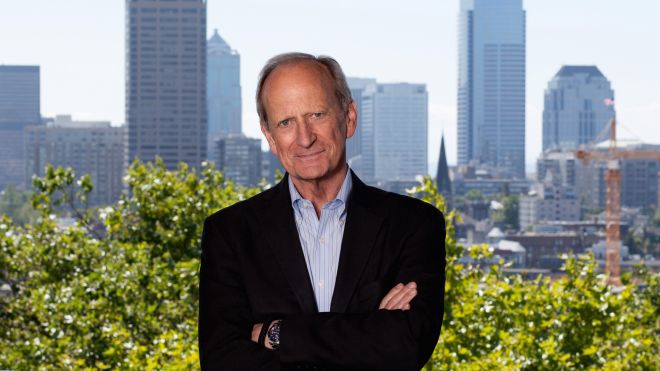 The Bullitt Center hasn’t been all sunshine and rainbows. The foundation has not managed to rent all of the space in the building — Hayes says that its off-downtown location and relatively high rents have been barriers. And because it hasn’t been fully occupied, it hasn’t yet met the Living Building Challenge it was designed for. (To meet that challenge, the building has to, among other things, generate all of its own electricity for a full year, while filled to capacity.)

But a recent report conducted by the Portland-based nonprofit Ecotrust (and funded by Bullitt) confirmed Hayes’ contention that building something can, in fact, be an act of philanthropy. The report measured “ecosystem services” such as clean air and water, healthy forests, etc., that the building provides via its energy efficiency, solar panels, rainwater capture system, and green-certified wood. The conclusion: The Bullitt Center will provide $18.5 million in public benefits over its lifetime.

As it happens, that’s almost exactly what it cost to build the thing. “It’s almost as if we spent $18.5 million on a gift for the public,” Hayes says, “and got a building for free at the end.” 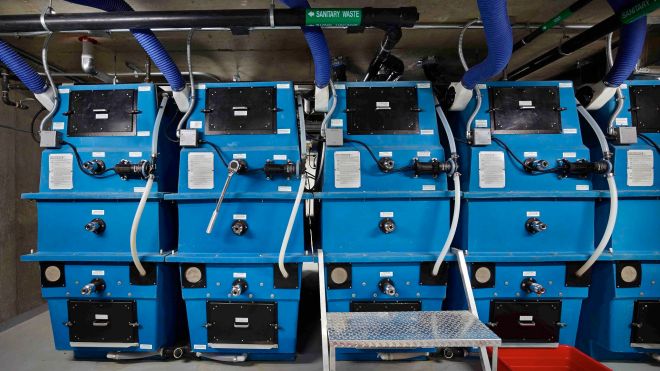 These evil robots digest the poo in Bullitt’s basement.Benjamin Benschneider