Labor conditions are awful at chicken plants, according to big report 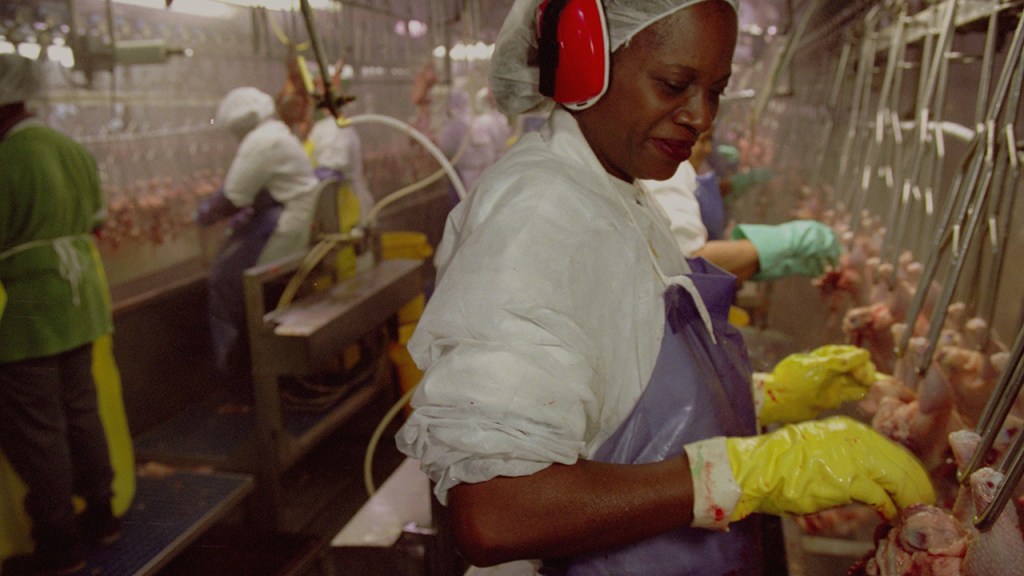 Labor conditions are awful at chicken plants, according to big report

We’ve long known that the chicken industry is pretty awful for chickens themselves, so perhaps it should come as no surprise that conditions for workers at poultry processing plants aren’t much better.

Lives on the Line, a new multimedia report from Oxfam America, details the harsh conditions chicken workers face in the U.S. Oxfam interviewed poultry workers in North Carolina, Arkansas, and Mississippi, and found they typically processed between 35 and 45 birds per minute — that’s more than 2,000 chickens an hour and 14,000 chickens in a workday. This type of repetitive labor is hard on the body: A Tyson worker told reporters on a press call that his hands swelled up so badly that he had to wear 3XL gloves. When he sought medical attention from the plant’s infirmary, he said he was told to take ibuprofen, soak his hands in epsom salts, and go back to work. His shifts were as long as 12 hours.

For this, Oxfam reports, Tyson pays an average of $11 an hour. “Poultry workers are among the most vulnerable and exploited workers in the United States,” Oxfam America President Ray Offenheiser said in a press release. “The industry is booming, profits are climbing, but poultry workers remain trapped at the bottom.”

Think Progress on the report:

[Workers] have ten times the rate of repetitive strain from microtasks than the rest of the workforce, seven times the rate of carpal tunnel syndrome, and five times the rate of musculoskeletal disorders generally. Human Rights Watch has found that poultry workers are 14 times more likely to have injuries such as “claw hand,” where their fingers get locked in a curled position, or ganglionic cysts where fluid is deposited under the skin. In a 2013 survey from the Southern Poverty Law Center (SPLC), 86 percent of workers reported hand and wrist pain, swelling, or numbness or the inability to close their hands.

“Despite industry claims that conditions are improving and injury rates are dropping, we don’t believe that they’re true,” Oliver Gottfried, senior advocacy and collaborations advisor at Oxfam, said on the media call.

Oxfam also found that workers often had to wait up to an hour for bathroom breaks. Some Tyson workers resorted to denying themselves water or even wearing diapers, according to the report. Tyson, naturally, disputes Oxfam’s claims, and told Think Progress in a statement, “we make it very clear to our production supervisors that they are to allow Team Members to leave the production line if they need to use the restroom. Not permitting them to do so is simply not tolerated.”

Riiiiight. Check out the full Lives on the Line report for a stunning look at the human cost of cheap chicken.