Behold a few of the marvelous things the internet has done for us: filed our taxes, found us dates, recommended that we watch the film Repo Man. Is there anything the internet can’t do? No, there’s not, and for proof I offer the fact that I am sitting in a room, watching people try to use the internet to save fish. Fish are in serious trouble, thanks to both overfishing and climate change. Could the tech world, with its legendary affinity for sushi, come to the rescue?

The U.S. State Department thinks so, and has a few ideas about how best to go about keeping the world’s remaining supply of fish alive and reproducing. For the last three years, it’s held a weekend-long coding competition (aka “hackathon”) as a way of getting those ideas implemented. It’s called the Fishackathon.

In cities around the world, coders work around the clock for a weekend to come up with software (and sometimes hardware) to tackle the problem of overfishing. At the end of it, a panel of judges in each city picks a winning team, and then the State Department unveils the winner of all winners on June 8 (World Oceans Day). That victorious team gets a $10,000 prize and a chance to develop their project with a U.S. government contractor.

This year’s Fishackathon happened simultaneously in 43 cities. At the San Francisco event, Jedediah Raskie, who works in fisheries enforcement for the Coast Guard, made a pitch to a bunch of coders that they should really consider working on the project he considers the most critical. It’s called “Maritime Domain Awareness.”

“If you see a fishing vessel out on the East Pacific, it’s hard to figure out if it’s allowed to be there,” Raskie said. “We need a Google for fishing vessels.” To puzzle out which vessel belongs where requires searching all the fishing boat registries separately: the WCPFC, the NOAA fisheries permit sites, and the United Nations Food and Agriculture Association’s (UN FAO) Fishing Vessels Finder. A central portal for these databases might spur international agencies to keep their information updated, Raskie said. The U.N.’s Fishing Vessels Finder hasn’t been updated since 2012.

The ideal result, Raskie told the crowd, would do for the oceans what the National Crime Information Center (NCIC) did for policing in the United States — provide a way to track bad actors, regardless of their location. “If you want to look at some of this data,” said Raskie, “I have a CD-ROM …”

There were audible gasps of horror from the audience. CD-ROM is antiquated technology in these parts.

The Fishackathon is evidence of the government’s growing interest in protecting the ocean as a valuable ecosystem, rather than just seeing it as a lot of water that needs to be guarded from foreign warships or drug smugglers. In 2012, for instance, the U.S. Navy and the Coast Guard began working together through the Oceania Maritime Security Initiative to police overfishing in the Pacific Ocean. In 2014, President Obama expanded the Pacific Remote Islands Marine National Monument (kind of a National Park for fish) from almost 87,000 square miles to nearly 782,000 square miles.

So how does the State Department manage to coax well-paid professionals to spend a weekend coding without pay? Sure, there’s the distant promise of prize money, but it’s paltry by hackathon standards. Yes, there are opportunities to schmooze, and the digs are nice. The San Francisco event was held at Manylabs, one of the many technology-oriented tinkering spaces that have opened in the city in recent years. It looked like a cross between a glamorous loft apartment and a very nice tool shed that no one has had the chance to mess up yet.

Still, it would have been even busier if most of the Bay Area’s other fish-friendly coders hadn’t traveled two hours south to the Fishackathon in the Monterey Bay Aquarium. Fish hackers there got to sleep in the aquarium and have brunch with a Laysan Albatross. Thomas Debass, a State Department representative and one of the hackathon’s judges, told me that he saw at least 60 guys with laptops and sleeping bags standing in line outside the aquarium doors before the event started. 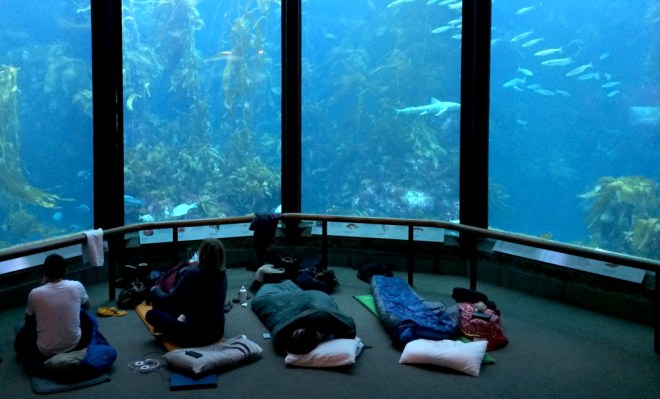 When I stopped by on the last day of the San Francisco fishackathon, rival teams were preparing to present their software.

Andrew Middleton, Roger Awad, and Daniel Hackner — software engineers working with Apple, OpenText, and as a volunteer at Andela, respectively — have been working on a project that the State Department calls Ghost Gear Recon. It works like this: Anyone out on the water who spots a lobster pot out of season or lost commercial fishing gear snaps a photograph. When they upload that photo to Ghost Gear Recon, the location data embedded in the photograph places it on a map of the ocean. That way, a fishing crew that has lost its gear at sea could check the map in the hope of tracking it down.

“Some of the things we’ve learned is that there is a lot of secrecy within the fishing community,” said Middleton, staring into his laptop screen and typing furiously. “They aren’t interested in larger public technology solutions, because they don’t want to advertise how often they are losing things. Because they lose stuff all the time. And then it gets tangled up in a whale.”

So their program is an attempt to get valuable trash out of the water. Most trash in the ocean is difficult and costly to retrieve.

Middleton searched his computer for images to put on a practice map. He found a picture of a dog, then took the photo’s metadata and changed it to something more appropriate for a lost crab pot drifting in the ocean. He uploaded the photo to the map and the dog appeared, hanging out in open water off the Pacific coast. Success. Hackner looked around. “Does anyone who got more sleep than me want to write the story of how we did this?”

In the end, Hackner, Middleton, and Awad emerged victorious, beating two other teams that had projects ready in time. The first was a universal system for tagging fishing gear so that it can be returned to its owners. The third, called Carp Patrol, was a method for using U.S. Geological Service data on river temperatures and stream-flow rates to predict spawning times for Asian carp, an invasive species that escaped from a southern fish farm in the 1980s and has been working its way up the Mississippi River ever since. It’s a cool idea, but when the team presented their demo it didn’t work.

Even if Ghost Gear Recon doesn’t win the final competition in June, the local branch of the Nature Conservancy is interested in helping them develop it. And there are other benefits. Over the course of the hackathon, connections formed between people who might otherwise never meet. The Coast Guard’s Raskie made plans to go diving with Middleton and asked for algorithmic advice from Hackner.

Still, I’m surprised that, out of the list of projects suggested by the State Department, no one picked up what seems like the most urgent one — Maritime Domain Awareness.

Coming up with a centralized way to keep track of fishing vessels on the ocean is an important problem, Hackner said. But it’s also painfully tedious. It would take a rare and special person willing to dedicate a weekend to merging together weird data sets from a variety of international sources that may not ever have any incentive to make their data better. Hackathons draw in fish-loving altruists, not martyrs. When it comes to a problem that hairy — well, the State Department is going to have to figure that one out for itself.