The Great Barrier Reef's no good, very bad year will test how fast it can adapt 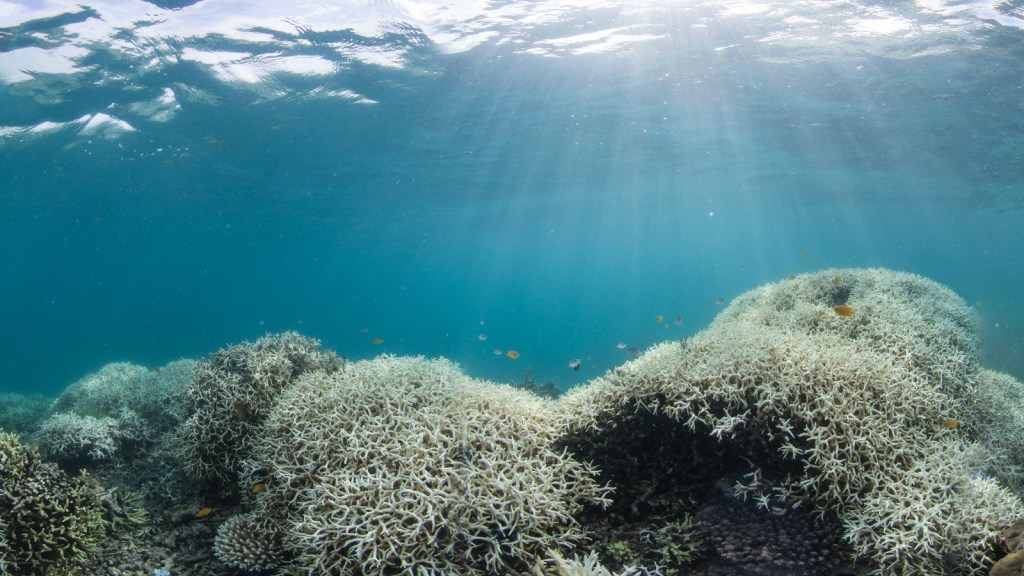 The Great Barrier Reef’s no good, very bad year will test how fast it can adapt

If you haven’t seen a coral reef for yourself, it can be hard to tell what the fuss over the global coral crisis is all about. From above, a healthy reef is dark, a shadow in the water, soaking up the sun against the pale sand in shallow, clear water. When a reef starts to bleach, it turns visibly white — often the crown of the reef will go first, where the coral in the shallowest water experience the hottest temperatures, leaving white speckles ringed in the darker, deeper corals. From above, these bleached reefs look like long streamers of white rubble against the blue backdrop.

These days, bleached reefs are what you’re most likely to see. Terry Hughes, a coral researcher at James Cook University, convened a task force that carried out an aerial study to figure out just how many reefs are still healthy in the northern section of the 1,400-mile-long Great Barrier Reef. Hughes and company found that out of 520 reefs surveyed, 95 percent were experiencing “severe” bleaching. In fact, Hughes could identify only four reefs that showed no signs of bleaching.

Allow me to do some easy, but alarming math: That means less than 1 percent of the reefs surveyed in the world’s most famous coral reef are as healthy as they should be.

A bleached coal is not necessarily a dead coral. Corals bleach as a reaction to high water temperatures, expelling the symbiotic algae that provide them with energy through photosynthesis. What’s left is the colorless coral organism minus its pigmented food factory, leaving the polyps to forage what food they can from the water flowing past them. As global warming drives up average ocean temperatures — and the last nine months were the hottest recorded history — severe coral bleaching has picked up pace.

But while a coral can recover from some bleaching, the longer it stays bleached, the more likely the colony is to starve to death. That’s why prolonged events are dangerous: They can last for years, with the possibility of coral survival dropping with every new month. The current global bleaching event began in late 2014 and could stretch into 2017, as El Nino conditions and global warming drives water temperatures higher, making this the longest recorded bleaching event on record.

Hughes’ aerial study has limitations: It helps us estimate the extent of bleaching, but it still takes eyes in the water — up close to the bleached coral — to tell what is dead and what is still hanging in there. In the task force’s report, Hughes noted that scientists in the water were estimating 50 percent mortality on some of the bleached reefs, though more sampling is needed — and, of course, the Southern Hemisphere summer isn’t quite over.

All of which means this could be the Big One — the mass die-off that marine biologists have been warning of for decades. While recent bleaching events have been bad — for example, in 1998, an estimated 16 percent of coral worldwide was wiped out; and in 2005 the U.S. lost half its Caribbean reefs in one bad summer — they’ve never hit at such a huge scale, and for so long, before.

Neal Cantin, a researcher at the Australian Institute of Marine Sciences, studies coral core samples taken from the largest, oldest corals on the Great Barrier Reef. The cores cut through all the layers of accreted growth and, like the rings on a tree, they show how much these ancient corals grew every year for the past 400 years. According to Cantin, of those 400 years, only the last 20 show periods of bleaching and reduced growth.

One scientist, Justin Marshall of the University of Queensland, put it bluntly to an Aussie news station: “What we’re seeing now is unequivocally to do with climate change.”

Yet there is a bright side.

While the northern end of the Great Barrier Reef is subject to the most extreme heat, it is also one of the most protected stretches, compared to more polluted, more developed southern sections. As Hughes told Australian news, “On the bright side, it’s more likely that these pristine reefs in the northern section will be better able to bounce back afterwards.”

Maybe that sounds optimistic, but reefs have come back from near-total coral death before — it just takes time and favorable conditions. And whether those favorable conditions arrive on the Great Barrier Reef will have a lot to do with how climate change progresses underwater in the next 10 years. As the Earth continues to warm, we can’t guarantee corals will have the time to grow back, because warmer temperatures means the pace of these dramatic bleaching events is accelerating.

But there are other stresses we place on reefs — overfishing, boat damage, and pollution from farming, mining, and onshore development — and there lies the source of Hughes’ wan hope. Pristine, protected reefs are healthier and more genetically diverse, which makes them more resilient despite serious setbacks. If marine reserves can help protect corals from these other ills, we may give reefs a fighting chance.

Marine protected areas have been making news in the past couple of years are great conservation tools and, if managed well, they can protect fishermen as well as fish. The idea has caught on: President Obama has established new national marine monuments and Palau turned most of its territorial waters into a marine reserve. But they’re not widely used yet: Globally, about 15 percent of land is protected, while less than 3 percent of the ocean is.

Coral reefs can be surprisingly resilient, considering they seem to have the temperament of a finicky Victorian prone to frequent swoons or deadly chills. After all, corals are adapting to a changing ocean already — but whether they can adapt quickly enough to keep up with us is still a big, scary question mark.