A word to the burly coal miners who complained that cutting coal out of our energy mix would take away their jobs when the Climate Action Plan was up for debate. Jobs in solar energy now outnumber jobs in coal mining and the oil and gas industry added together, says a new report from the International Renewable Energy Agency (IRENA).

Solar may be taking away old jobs, but it’s offering new ones. That’s especially true for women. IRENA found that the renewable energy sector employs more women than oil, gas, and coal. In fact, the percentage of women working in solar is rising — up from 19 percent in 2013 to 24 percent of the estimated 209,000 solar jobs in the United States. That’s not yet great — women hold 47 percent of the jobs in our economy. But it’s still a higher percentage than in the bro-topia that is the conventional energy industry.

Worldwide, employment in green energy grew 5 percent in 2015, to 8.1 million jobs, while the slump in oil prices that began in the fall of 2015 eliminated an estimated 350,000 oil jobs across the planet. 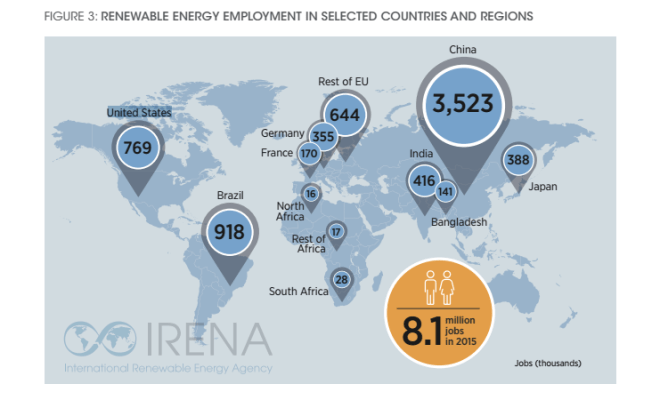 Around the world, the solar industry was the largest renewable energy employer — jobs increased 11 percent between 2014 and 2015, to 2.8 million jobs. Most of those jobs — 1.7 million — are in China, because that’s where most solar panels are manufactured. In the European Union, a decline in manufacturing means that the region lost jobs, but high rates of solar installation in the United States kept solar employment high.

One of the most interesting markets for solar is in countries with unstable electrical grids, such as Bangladesh, India, and Kenya. It’s possible that those countries will be at the forefront of adopting small, independent solar systems, in much the same way that Egypt and other countries without widespread telephone access were early cellphone adopters. In North Korea, small, personal solar panels are on the rise, bought by people who need to charge cellphones when the grid goes down. 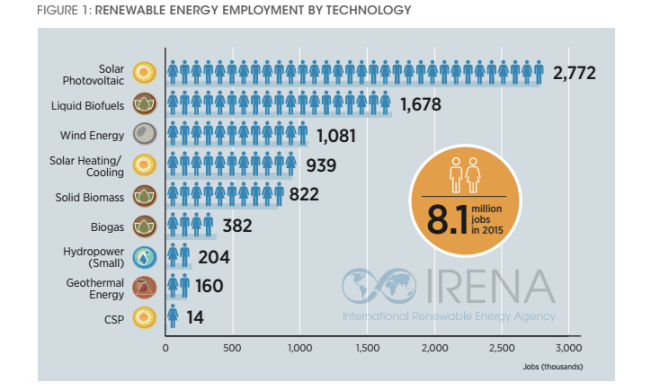 Both the United States and the European Union have accused China of selling solar panels at below-market value in order to drive solar manufacturing in other countries out of business, and have put hefty import tariffs on Chinese solar panels. In response, Chinese manufacturers have globalized their solar operations, setting up solar panel factories in other countries like Malaysia, Thailand, India, Brazil, and the United States.

So, good news. IRENA estimates that if nations follow through on the climate pledges made in Paris last year, this upswing is only going to continue. Their estimate? Jobs in renewable energy will triple to 24 million by 2030.

Crazy idea to change the world: What if we gave kids a good start in life?