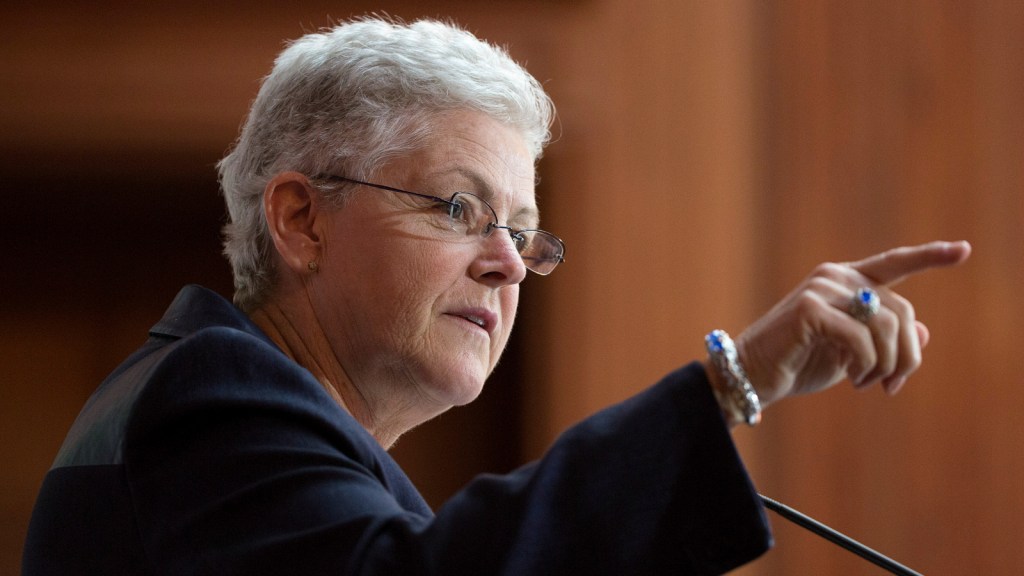 REUTERS/Joshua Roberts
A drink and a nod

Opponents of water privatization are criticizing EPA Administrator Gina McCarthy for planning to give the plenary address at a conference sponsored by private water companies. You’d think she might be more leery of the industry, considering that it played a role in the tragic debacle with drinking water in Flint, Michigan.

Wednesday morning, at the American Water Summit, an annual confab hosted by industry trade journal Global Water Intelligence, McCarthy will give opening remarks ahead of a plenary panel featuring CEOs of the largest private water companies in the world. The description of the session claims that “cities cannot do it alone” and promotes private sector involvement in public water systems.

Critics say that McCarthy’s participation implies endorsement of water privatization and that the EPA chief should know better. “We’ve watched the American Water Summit as a forum where the private water industry advances their cause,” says Jesse Bragg, a spokesperson for Corporate Accountability International, an organization that works to protect public health and the environment from corporate abuse. “It’s a place where they promote public-private models with public officials.”

The panel McCarthy introduces will include representatives of companies that provide private municipal water services such as Veolia Water Technologies and Suez North America, a division of the French firm Suez Environnement. Those companies have persuaded a growing number of cities and counties to pay them to manage their drinking water.

Often, those communities come to regret it. In Flint, Veolia was hired in February 2015 to ensure drinking water quality. It reported to the public that the city’s water was safe shortly before lead contamination was discovered. Now it is being sued by the Michigan attorney general for negligence and fraud. In Pittsburgh, Veolia massively overbilled residents and then cut off their water when they refused to pay. Suez has done the same to cities all over the world. Jakarta, Indonesia, where Suez took control of part of the water system in 1998, suffered years of limited water access, poor water quality, and some of the highest water prices in Asia. An Indonesian court terminated its contract last year over the company’s objections, in part because Suez had gotten the contract through buddying up to later-deposed Indonesian dictator Suharto and his cronies.

So why would McCarthy, the U.S. official charged with ensuring access to safe drinking water, speak in the same session as these corporations’ CEOs? EPA spokesperson Nick Conger told Grist in an emailed statement that McCarthy wants to “highlight the challenges and opportunities in providing clean and reliable water in the United States.”

EPA and Global Water Intelligence do not agree with Corporate Accountability International’s depiction of the summit. They note that many of the companies present — including three that will be represented on the plenary panel McCarthy introduces — are not water privatizers but companies that provide other services such as engineering, technology, and construction management to both public and private water systems. Public officials will also be attending and speaking at the conference.

But the sponsors paying for the conference include water privatization companies such as Suez. Corporate Accountability International argues that that gives the conference a pro-privatization bent. The National Association of Water Companies, a trade group for the private water industry, is sponsoring the event’s free wifi. It has previously lobbied Congress for legislation friendly to water privatization, such as an amendment to a 2014 bill to make it easier for private water companies to get the same benefits as public authorities in raising money for infrastructure investments through tax-exempt bonds.

Asked by Grist about criticisms of McCarthy’s presence at its conference, the American Water Summit’s organizers contend that there is nothing pro- or anti-privatization about its event. “The water industry has always been a mixed economy of technology suppliers, service companies and utilities,” said Christopher Gasson, publisher of Global Water Intelligence, in an email. “At the American Water Summit we’re just continuing a dialogue that’s been going for 150 years. It’s not about privatization — it’s about finding new solutions to tough problems, like California’s drought and fixing drinking water quality issues like the one in Flint.”

While there may be nothing inherently nefarious about McCarthy’s presence, opponents of water privatization see it as an example of the Obama administration’s too-friendly attitude toward private water. In January of last year, for example, Obama announced the creation of a Water Infrastructure and Resiliency Finance Center in EPA, which is intended, in part, to promote private-public partnerships. In March of this year, the White House Water Summit included Veolia and the National Association of Water Companies as participants.

The incoming U.S. president, like most other Republicans, will certainly promote the privatization of public services. It’s disappointing that the Democrats aren’t standing more clearly against it.