If you want to crowdfund meaningful climate action, what’s your best option? Lots of allegedly climate-friendly projects solicit donations via Kickstarter and Indiegogo, but it’s not particularly easy to get a sense of quality and cost-effectiveness. Mosaic, which began as a crowdfunding platform, now helps users loan money to solar projects — more of an investment approach than a tool for helping you make smart donations.

Now, Cool Effect, a nonprofit based in San Francisco, Calif., offers a new option. The group’s platform, which launched in beta on Thursday with six projects available for funding, allows users to choose between one-time donations and a monthly subscription model. All of the projects on the site are designed to cut carbon pollution, and they’re funded on a ton-by-ton basis, with the price per metric ton varying between $4.12 and $13.18. Current projects include a biogas program for animal husbandry in Vietnam, an improved cookstove program in Peru, and a conservation project targeting the Alto Mayo Protected Forest in Peru. More will be coming soon.

“What we’re really trying to do is give people a way to take simple and tangible action on this issue,” says Marisa de Belloy, Cool Effect’s chief operating officer.

The platform isn’t the kind of place where just anyone can upload their backyard urban garden project for funding, though. The nonprofit chooses the projects that its users can support. So why trust its choices?

Cool Effect maintains a wholly owned subsidiary called Global Offset Research, which is staffed by scientists and financial analysts responsible for digging into potential projects’ viability, says de Belloy. If a project falls under the Cool Effect hood, that means it has passed a detailed financial and management analysis, as well as cross-verification of its scientific claims. “We really look at this the way you would do due diligence on a business,” she says. That might not make for the sexiest projects, but de Belloy argues that the process elevates projects that are the most effective and financially sustainable.

One of the criteria for a project’s inclusion is what de Belloy calls “absolute additionality.” That is, the project must offer something wholly new: an actual improvement over the status quo. If the effects of a potential project are legally required — adhering to a methane-capture standard, for example — that’s not good enough. “If the project can be profitable without the revenues from carbon, then it’s not additional in our book. If the revenues from carbon weren’t factored in at the very beginning of the project, and it was only an afterthought, then for us, it’s not additional,” she says. Old technologies also aren’t fair game.

The nonprofit is also serious about a focus on transparency: Navigate to a project, for example, and you can download all the due diligence documents the Cool Effect team has compiled about it. For the user, it’s a deeper dive than most platforms allow — more like grant review than casual support. Poking around the site carries a touch more gravitas than tossing dollars at potato salad.

De Belloy says users shouldn’t think about funding projects on Cool Effect — effectively buying credits — as a way of offsetting their own emissions. That’s not the goal. “We want consumers to think about this as supporting projects: supporting the world’s best carbon-reduction projects.” For people interested in doing more than changing their light bulbs, she says, this platform allows them to step their game up. They get to back projects that make a tangible difference, and they get to see exactly where their pennies are going.

Will the platform catch on? The team says its research suggests there are 130 million Americans out there concerned about climate change. Perhaps making it easier to support promising initiatives will inspire more than a few of them to open their wallets.

Cool Effect will be in Austin, Texas, at South by Southwest from March 11 to 15. 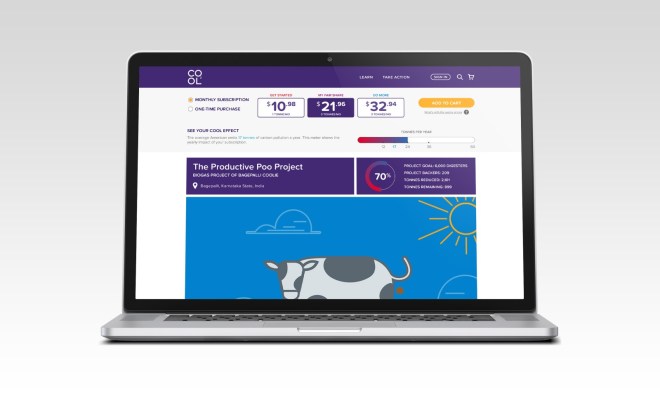