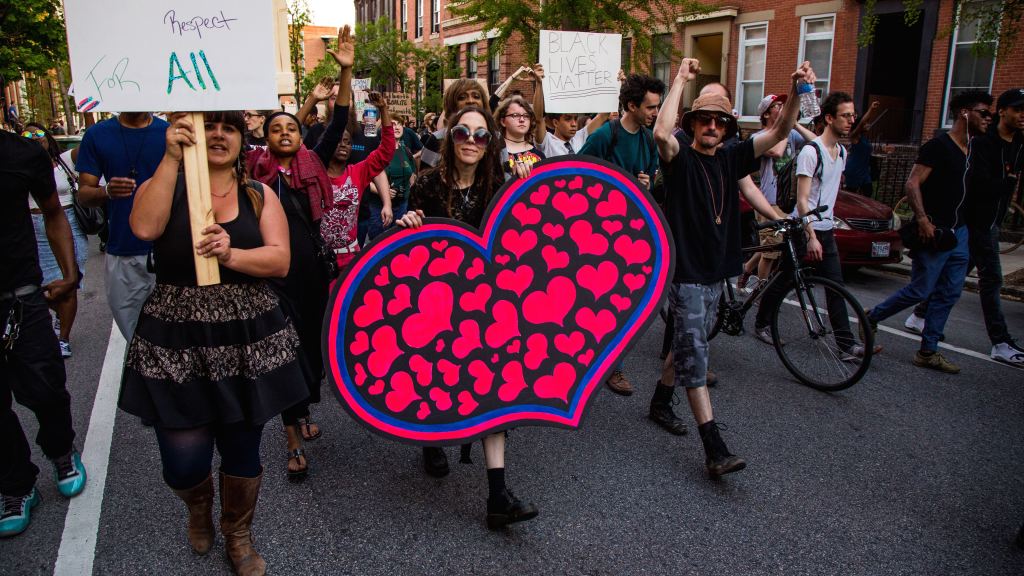 This morning, State’s Attorney Marilyn Mosby announced that six Baltimore City Police officers involved in the arrest of Freddie Gray, a 25-year-old who died in their custody, will be charged with murder, manslaughter, assault, and misconduct.

The charges, a rarity in a city where police violence is commonplace, cap a week of impassioned protest — protest that turned fiery Monday night, causing many in the media, and one guy in the White House, to brand the angry youth “thugs.”

Who are the thugs now?

Truth be told, this story has never fit neatly into the narratives that the police, elected officials, and the media have built around it — simplistic stories of lawless youths, tough-love police policy, and angry blacks senselessly destroying their own neighborhoods. Baltimore residents have pushed back at those narratives from the beginning, spreading news and images via social media, back-talking national TV anchors, and, most importantly, by taking actions that put the lie on any notion that this story can be painted in stark black and white.

We saw this even as things began to spin out of control on Monday, when local clergy placed themselves in between protesters and the police, urging residents to take nonviolent action. We saw it when community leaders calmed rioters and asked the police to stand down. We saw it as the smoke cleared and the National Guard rolled into the city, when residents came out en masse to clean up the mess, make peace with their fellow residents, and begin to pick up the pieces.

I’m not suggesting that all is well in Baltimore. People are angry and afraid, and rightly so. Even if justice is served in Freddie Gray’s death, and cool heads prevail from here on out, the riots will leave a lasting mark on local businesses and neighborhoods, and the larger economy as well.

But Baltimoreans have been pushing back against the narrative of hopelessness for a long time, and many of those efforts have gained momentum in recent years: Local nonprofits have sprung up to provide services for kids, keep young people in school and out of prison, and help with re-entry when inmates return to their communities; young people whose parents fled for the suburbs are coming back, setting down roots; the city’s art scene is burgeoning; there’s a growing urban farm movement, and regular events that fill the streets with bicyclists.

Small steps, perhaps — and as my friend David Dudley points out, progress has been halting. But people I’ve spoken with in Baltimore say that something snapped this week. The anger, the frustration, the fire, broke through walls of denial and discord that have prevented this city from addressing its may ills. “It is like nothing I’ve ever experienced,” one friend told me. “I don’t know if Baltimore will be the same.”

Here’s hoping that feeling of solidarity and common purpose can hold, and that Baltimore can build on the steady, quiet progress it has already made. In that spirit, here are five of the groups that I find most inspiring, pulled from my time as a writer and editor at the late, great Urbanite magazine, from the Grist archives, and from friends who are still in the city, doing great work:

This 15-year-old nonprofit trains young people to tell their own stories through video, photography, mural painting, and other media. The results will change the way you look at the city. You doubt? Watch this short video, Blessed Is the Peacemaker, about East Baltimore resident Tard Carter, who works for another amazing Baltimore organization called Safe Streets, defusing violent conflict before it can blow up. “My mission in life is to change the meaning of slick in the United States Ghettos of America,” Carter says. “Positive is the new slick.”

2. Leaders of a Beautiful Struggle

This “grassroots think tank” was founded by an inspired group of young people that included one of the guys who used hip hop, poetry, and a focus on social justice to beat out schools like Harvard and Dartmouth for the 2008 college debate national championship. The group now focuses on youth leadership development and political advocacy, and was one of the main players in the fight against plans to build a new youth jail in Baltimore. The state scrapped the $70 million plan in 2013, opting instead to build a center where youth offenders can get education, therapy, and drug abuse counseling.

Here’s CEO Adam J. Jackson explaining to Fox News host Sean Hannity that just because Baltimore has a black mayor and a black police commissioner, that doesn’t mean that decades of racism and racist police policy didn’t come into play this week:

Indiana native Sarah Hemminger started this nonprofit in 2004 with her husband, Ryan, while she was working on a PhD in biomedical engineering at Johns Hopkins University — because, you know, she needed something to do in all her free time. The group hand-picks failing Baltimore City high school students and provides them with full-time, round-the-clock, surrogate “families” — which often include more overachieving Hopkins students — that provide the support, nurturing, and sometimes tough love that any kid needs to get through high school. The group’s success rates blow other national models out of the water. Here’s its promo video:

Baltimore’s first official arts and entertainment district is about much more than murals and rock opera — although you’ll find those things, here, too. The nonprofit uses what its website calls an “arts-based revitalization and placemaking strategy” that builds bridges between the local arts community (including the cool kids from the nearby Maryland Institute College of Art), longtime neighborhood residents, and people who come from far and near to witness the district’s colorful, often campy creative antics. The district has grown in the past decade to include dozens of studios, galleries, and performance spaces. Its Open Walls Baltimore festival unleashes internationally known street artists on local edifices, with stunning results:

Lest you think that everything good in Baltimore has popped up since Y2K, I’ll end with this gem, a community garden lovingly tended for more than 25 years in an otherwise bleak patch of East Baltimore. Lewis Sharpe, the 76-year-old garden manager, calls it “God’s little acre.” It was born during the height of the crack cocaine epidemic, a project of a local men’s group that wanted to clear out a patch of the blighted neighborhood and create a safe zone, protected from drug dealers. These days, the garden cranks out a steady stream of fruits and veggies, many of which are distributed to neighborhood residents and local soup kitchens.

I couldn’t find any video of the miracle garden — and I’m not sure that any exists. It’s one of Baltimore’s countless hidden secrets. So I’ll leave you with this scene, a video posted the day after the riots, of Baltimore residents back in the streets, proving to each other, and to the rest of the world, that this city may be down, but it’s anything but out: