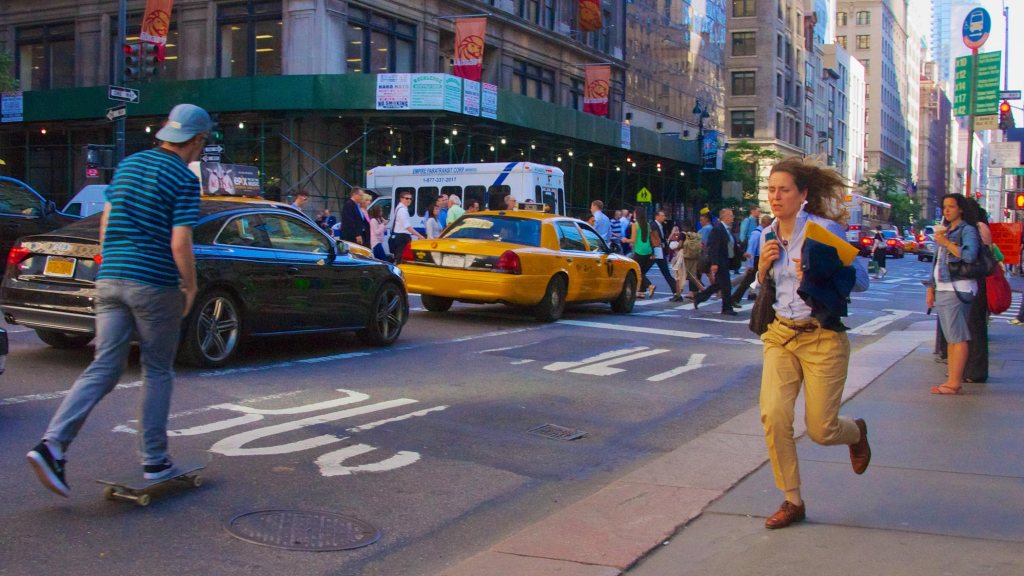 Bill de Blasio’s recent election as mayor of New York City has thrilled progressives across the country. But for environmentalists, the replacement of Mike Bloomberg — a billionaire and former Republican — with a liberal Democrat is, ironically, a cause for unease. Bloomberg began reorienting New York’s streetscape away from favoring cars to supporting every mode of transportation. De Blasio has a mixed record on complete streets and transportation policy. Despite his crunchy, Sandinista-supporting, Park Slope–dwelling image, de Blasio is fond of driving and sympathetic to the motorist’s perspective.

Complete-streets advocates are an increasingly well-organized and powerful force in New York politics. If de Blasio wants to win them over, he should take a look at a feature in the new issue of Reclaim, the magazine published by Transportation Alternatives, a leading New York advocacy group. TA called on some of its staffers to offer suggestions for the new mayor to enhance pedestrian and bike safety:

1. Enforce traffic safety laws. This may sound like something that must already be happening, but it isn’t. Cars in New York routinely break the speed limit, block the crosswalk, and commit other infractions that endanger pedestrians with impunity. Last year, 15,465 New York City pedestrians and cyclists were injured, and 155 killed, by drivers. As Streetsblog notes, “Historically, nearly half of motorists who take the life of a New York City pedestrian or cyclist do not receive so much as a citation for careless driving.” Juan Martinez, TA’s general counsel and legislative director, writes, “A police commissioner that gets serious about data will prioritize serious enforcement against speeding and failing to yield to pedestrians in the crosswalk. It’s unconscionable that the NYPD issues four times as many tickets for window tint violations, which according to NYPD crash reports cause zero fatal or injurious crashes, as speeding, which is the number one cause of fatal crashes.”

2. Speaking of speeding cars, how about a 20 mile-per-hour speed limit on all residential streets, and all streets adjacent to schools and parks? “Not only would a slower speed limit save lives and prevent injuries, New Yorkers are already clamoring for Neighborhood Slow Zones — there were more than 100 applications last year — and other big cities like Chicago and London are showing that 20 mph speeds are practical and effective,” writes TA Planning Director Jennifer So Godzeno. Godzeno also calls for mid-block crosswalks on all public housing super-blocks. When the massive public housing projects paved over the street grid and created monstrous super-blocks, they left paths that lead one to cross the street in mid-block, even though there is nothing stopping cars there. Installing crosswalks would be one small step toward undoing some of the damage of the urban-renewal era.

3. Get trucks off of city streets whenever possible. Some streets could simply be closed to trucks, and tolls on various bridges and tunnels could be rebalanced so that they no longer incentivize taking over-taxed city streets.

4. Reclaim the streets from private cars for public goods. Right now, we give most of the public space in our streets to privately owned cars and trucks that pollute the air and spew CO2. Why not take back more space for the greater public good? That would mean more protected bike lanes, more pedestrian plazas, and more lanes dedicated to bus rapid transit. (De Blasio supports expanding New York City’s Select Bus Service, which is express bus service that supporters sometimes call bus rapid transit, but it does not involve setting aside lanes of traffic just for the buses.)

5. Build “a public monument to traffic victims in New York City.” This one comes from Lindsey Ganson, T.A.’s chief operating officer, who wrote movingly this past spring about her father being hit in a crosswalk by a speeding driver. A monument might help raise awareness and change public attitudes, Ganson writes, serving “as a reminder that these were preventable deaths, and to honor all the people who fell victim to our mistaken priorities and our wrongheaded attitudes about traffic.”

6. Making drivers pay for the negative externalities from their cars, such as pollution. “Fair transportation is when you pay the real costs of your trip,” writes T.A.’s deputy director, Noah Budnick. If your car is bigger and causes more road damage, you pay more. If you drive more, you pay more. This would be effectuated by “road pricing, East River bridge tolls, pay-as-you-drive insurance [and] weight-based registration.”

That’s an ambitious agenda, and de Blasio isn’t going to adopt all of it. But if he wants to clean up New York’s air and reduce its contribution to climate change by getting New Yorkers out of their cars, he’s got plenty of options.