A rusty, abandoned railway choked with vines and trash may soon become a greenway in Central Queens, one of New York’s less-leafy boroughs. The awesome-sounding QueensWay Project is an effort to increase park equity across the city, reduce pedestrian fatalities, and give Manhattan’s beloved High Line a run for its money. Project designers released a plan this week that’s chock-full of suggestions for added perks like public art, performance spaces, and ethnic food vendors, making it not just a bike path, but a “cultural greenway,” too.

Though it’s modeled after the High Line — that artfully landscaped linear park in Chelsea, also built on an elevated railroad spur — supporters say it’ll be bigger and better, reports the New York Times:

“The plan is beautiful, but highly functional,” said Adrian Benepe, director of city park development for the nonprofit Trust for Public Land and a former New York City parks commissioner. “It’s like the High Line on steroids. It’s twice as long and seven times the acreage.” 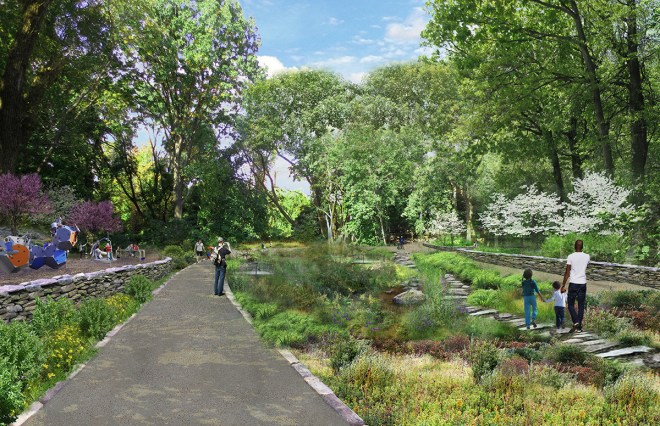 Rendering courtesy of the Trust for Public Land, dlandstudio, and WXY

In addition to some public disagreement about the vision of the thing, the big problem, of course, is money:

The new plan puts it at $122 million, nearly as much as the cost of the Community Parks Initiative that [Mayor] de Blasio announced last week. That $130 million plan calls for rebuilding 35 small, neglected parks in low-income areas across the city.

Encouraging people to walk and bike instead of drive — and giving more New Yorkers access to the verdant spaces that Manhattan and Brooklyn know and love — is certainly worth a few mil. Queens has the highest rate of auto-related pedestrian deaths in New York, too, and there are no bike routes in any of the six neighborhoods near the proposed project.

The Trust for Public Land, the nonprofit that’s partnering with Friends of the QueensWay to make this thing happen, has raised some private funds, and pedestrian and bike path projects can often snag federal money. $122 million, though? Fingers triple crossed.

We don’t, and can’t, know how much it will cost to tackle climate change